You are here: Home › history › The Last Safari – The Phenomenon Ernest Hemingway 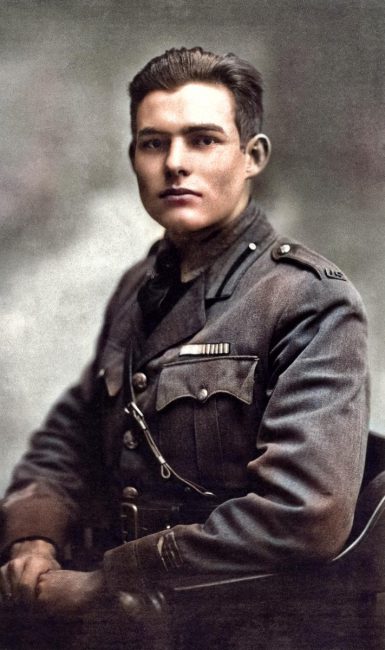 He was one of the most successful and best known American authors of the 20th century. He also was a journalist, war reporter, foreign correspondent. Four times he was married, for most of the time of his life he was a heavy drinker, and he had a passion for big game hunting in Africa. For his novell ‘The Old Man and the Sea‘ – you know the story with the fisherman catching this once in a lifetime big fish and loosing it again to the sharks – Ernest Hemingway received both the Pulitzer Prize as well as the literature Nobel Prize. On July 21, 1899, Ernest Hemingway was born in the small town of Oaktown, Illinois.

“The world breaks everyone and afterward many are strong at the broken places. But those that will not break it kills. It kills the very good and the very gentle and the very brave impartially. If you are none of these you can be sure it will kill you too but there will be no special hurry.”
— Ernest Hemingway, Farewell to Arms (1929)

After high school Hemingway reported for a few months for The Kansas City Star, before leaving for the Italian front to enlist with the World War I ambulance drivers. In 1918, he was seriously wounded, for which he received the Italian Silver Medal of Bravery, and returned home. His wartime experiences including his falling unhappily in love with the American nurse Agnes von Kurowsky formed the basis for his novel ‘A Farewell to Arms‘, published in 1929 .

In 1922, Hemingway married Hadley Richardson, the first of his four wives. The couple moved to Paris, where he worked as a foreign correspondent, and fell under the influence of the modernist writers and artists of the 1920s “Lost Generation” expatriate community, amongst them F. Scott Fitzgerald,[4]  Gertrude Stein and Ezra Pound. The ‘Sun Also Rises‘, where he tells the story of a group of American and British expatriates who travel from Paris to the Festival of San Fermín in Pamplona to watch the running of the bulls and the bullfights, was published in 1926. One year earlier, in 1925 Hadley learned Hemingway was involved with another woman, Pauline Pfeiffer, and she divorced him the following year. 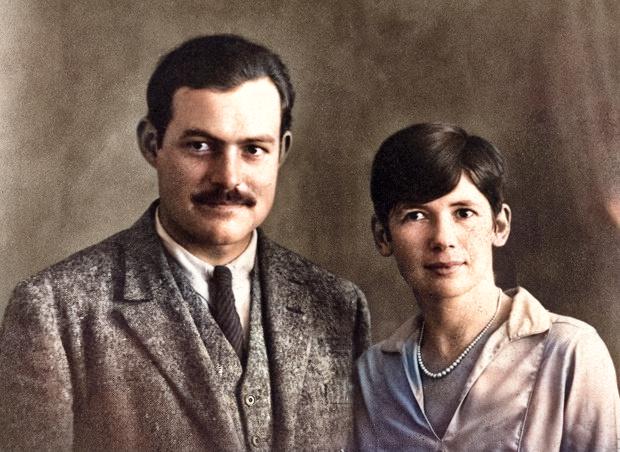 Ernest and Pauline Hemingway in Paris, 1927

The Green Hills of Africa

In 1927, Hemingway married Pauline Pfeiffer. During the early 1930s the couple spent the winters in Key West and summers in Wyoming, where Hemingway found “the most beautiful country he had seen in the American West” and hunting that included deer, elk and even grizzly bear. In 1933 Hemingway and Pauline went on safari to East Africa. The 10-week trip provided material for ‘The Green Hills of Africa‘, as well as for the short stories “The Snows of Kilimanjaro” and “The Short Happy Life of Francis Macomber“.

“Kilimanjaro is a snow-covered mountain 19,710 feet high, and is said to be the highest mountain in Africa. Its western summit is called by the Masai “Ngàje Ngài,” the House of God. Close to the western summit there is the dried and frozen carcass of a leopard. No one has explained what the leopard was seeking at that altitude.”
Ernest Hemingway, “The Snows of Kilimanjaro,” first published in Esquire (August 1936);

But, the couple was divorced after Hemingway returned from the Spanish Civil War, where he had acted as a journalist, and after which he wrote his most famous novell ‘For Whom the Bell Tolls‘, published in 1940. Hemingway first met his third wife Martha Gellhorn during a 1936 Christmas family trip to Key West. Both travelled in Spain together to cover the Spanish Civil War.  Martha and Hemingway lived together off and on for four years, before marrying in December, 1940. Increasingly resentful of Gellhorn’s long absences during her reporting assignments, Hemingway wrote to her in 1943: “Are you a war correspondent, or wife in my bed?” After four contentious years of marriage, they divorced in 1945.

During the Second World War he participated, among other things, in the Battle of the Bulge as a war correspondent. Temporarily he moved to the side of the active and led a small group of resistance fighters in Rambouillet in a controversial role as commander or advisor. He was present at the Normandy landings and in August 1944 he witnessed the liberation of Paris.

In 1946 Hemingway got married for a forth time with Time magazine correspondent Mary Welsh. During a stay in Venice in December 1948 Hemingway met Adriana Ivancich, then 18 years old. He fell in love with the young girl who inspired him to write the novel Across the River and into the Trees, published in 1950. The Platonic love story, which was accompanied by an extensive exchange of letters and seriously burdened the writer’s marriage, lasted until 1955.

On October 28, 1953 Hemingway received the Pulitzer Prize and in 1954 the Nobel Prize for Literature, which was mainly due to the revaluation of his previous work following the publication of The Old Man and the Sea. The novella takes place in Hemingway’s adopted country Cuba. Hemingway is still revered in Cuba today: there are museums, literary festivals and coins dedicated to the Nobel Prize winner. Shortly after the publication of ‘The Old Man and the Sea‘, a story that he wrote in only eight weeks time, saying that it was “the best I can write ever for all of my life“, Hemingway went on safari to Africa, where he was almost killed in two successive plane crashes that left him in pain or ill-health for much of the rest of his life. In 1959 he finally moved his residence from Cuba to Ketchum, Idaho, where he committed suicide in the summer of 1961.

Hunting, deep-sea fishing, boxing and above all bullfighting fascinated him, which is also reflected in his complete works. His literary heroes are typical examples of the “lost generation” ; they try to master their lives and endure their fate with composure, which Hemingway’s short writing style particularly emphasizes. Hemingway’s legacy to American literature is his style: writers who came after him emulated it or avoided it. After his reputation was established with the publication of The Sun Also Rises, he became the spokesperson for the post–World War I generation, having established a style to follow. His books were burned in Berlin in 1933, “as being a monument of modern decadence“, and disavowed by his parents as “filth”.