You are here: Home › literature › F. Scott Fitzgerald and The Great Gatsby

On April 10, 1925, F. Scott Fitzgerald‘s famous socially critical novel ‘The Great Gatsby‘ was published. The story takes place in 1922, during the Roaring Twenties, a time of prosperity in the United States after World War I. The book received critical acclaim and is generally considered Fitzgerald‘s best work. It is also widely regarded as a “Great American Novel” and a literary classic, although it didn’t sell very well during Fitzgerald‘s lifetime.

“Whenever you feel like criticizing any one… just remember that all the people in this world haven’t had the advantages that you’ve had.”
– F. Scott Fitzgerald, The Great Gatsby (1925)

The Story of an Eccentric Millionaire

The Great Gatsby is the story of eccentric millionaire Jay Gatsby as told by Nick Carraway, a Midwesterner who lives on Long Island commuting to Manhattan to work. Gatsby’s enormous mansion is next to Carraway’s modest home, and Carraway becomes curious about his neighbor after being invited to one of his legendary parties. Nick soon realizes that Gatsby is in love with Daisy Buchanan, Nick’s cousin and the wife of Tom Buchanan, an old acquaintance of Nick’s from Yale. When Buchanan takes Nick for a day in the city, he realizes that Buchanan has an affair with Myrtle, the wife of a long island mechanic.

Gatsby plans to arrange via his new acquaintance Nick a “chance” meeting for himself with Daisy. Gatsby, previously known as Jay Gatz, had once been in love with Daisy, but Daisy married Tom while Gatsby was in Europe during the Great War. Back home from the war, Jay Gatz abandoned his old identity, becoming Jay Gatsby and accumulated a fortune with the help of notorious criminal Meyer Wolfsheim. When settling in Long Island, Gatsby chose the site of his house because it was across the bay from Daisy’s home, from which a green light could be seen at night. 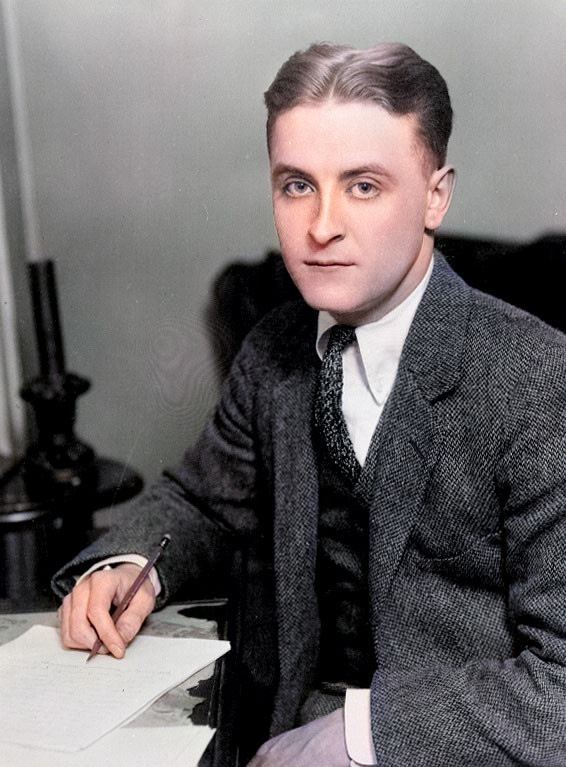 I do not want to spoil your fun, when reading ‘The Great Gatsby‘ by yourself. Therefore, I’ll stop with the synopsis of the novel at this point simply by telling you that it won’t come to a Hollywood like happy ending. The Great Gatsby received mostly positive reviews when it was first published in 1925 and many of Fitzgerald’s literary friends wrote him letters in praise of the novel. However, Fitzgerald’s goal was to produce a literary piece which would truly prove himself as a writer and Gatsby did not experience the commercial success of Fitzgerald’s previous two novels, This Side of Paradise and The Beautiful and Damned, and although the novel went through two initial printings, some of these copies remained unsold even years later. Fitzgerald himself accredits poor sales to the fact that women tended to be the main audience for novels during this time, but Gatsby did not contain an admirable female character. With time, critics acknowledged that perhaps Fitzgerald did not receive the public praise he hoped for because he was not writing about the American peasant, which, during the 1930s, would have been problematic given the increasingly desperate economic conditions of the Great Depression.

The Contradictions of the American Dream

In his novel The Great Gatsby, F. Scott Fitzgerald deals with the social transformation of American society after the First World War and shapes his central theme in a brilliant style: “the contradictions of the ‘American Dream‘, the striving for happiness, success and wealth in a consumer society.” Fitzgerald addresses the appreciation of human beings in relation to morality and social status against the background of the relationship and adultery of that time.

How to Choose the Right Title?

Fitzgerald had difficulty choosing a title for his novel and entertained many choices before reluctantly choosing The Great Gatsby, a title inspired by Alain-Fournier‘s Le Grand Meaulnes. Fitzgerald remarked that “the title is only fair, rather bad than good.” Although 1926 brought Owen Davis’ stage adaption and the Paramount-issued silent film version, both of which brought in money for the author, Fitzgerald still felt the novel fell short of the recognition he hoped for and, most importantly, would not propel him to becoming a serious novelist in the public eye. For several years afterward, the general public believed The Great Gatsby to be nothing more than a nostalgic period piece.

An Alcoholic Since College

Fitzgerald, an alcoholic since college, became notorious during the 1920s for his extraordinarily heavy drinking, undermining his health by the late 1930s. In 1927 Fitzgerald began working for the Hollywood film industry, which led to the family living regularly on the West Coast for some time and then returning to Europe for a few months. His wife Zelda suffered a severe nervous breakdown in 1930 which led to her being admitted to a clinic in Nyon, Switzerland. After his ambitious novel Tender Is the Night (1934) was neither a success with the critics nor the readers, Fitzgerald fell into disrepair. He drank, was over-indebted and felt unable to write. He suffered from depression and later called it his crack-up phase. From 1937 to the end of 1938 he worked for MGM in Hollywood and at the same time tried to write short stories to cope with his debts. His daughter Scottie lived in boarding school during this time. His marriage with Zelda, which had to be committed again and again, broke up completely during this time.

“So we beat on, boats against the current, borne back ceaselessly into the past.”
– F. Scott Fitzgerald, Closing Lines of The Great Gatsby, 1925

When Fitzgerald died on 21 December 1940 after two heart attacks, he had been largely forgotten. It was not until the 1970s that Fitzgerald was rediscovered by a wide audience with the successful film adaptation of The Great Gatsby. The book became a worldwide bestseller. The Great Gatsby has been adapted numerous times, in various media including books, radio, television, movies, ballet and even opera. What strikes me most is the fact that there are even computer games based on the original novel: in 2010 a casual Hidden Object game called Classic Adventures: The Great Gatsby was released by Oberon Media and in 2012 The Great Gatsby was released for the iPad.