You are here: Home › astronomy › The End of a Comet – Shoemaker-Levy 9 hits Jupiter

On July 22, 1994, the last parts of the comet Shoemaker-Levy 9 collided with the largest planet within our solar system, Jupiter. This was the first time, that an extraterrestrial collision of two objects could be directly observed.

Comet Shoemaker-Levy 9 approaching Jupiter Shoemaker-Levy 9 got its name from the US-American scientists Eugene Shoemaker, his wive Carolyn, and David Levy, it was the 9th periodic comet to be discovered. Its official name is D/1993 F2 (Shoemaker-Levy). The “D” in its name stands for “disappeared” and indicates that the comet no longer exists. The first prediction of its collision with Jupiter was made in 1993 by the Japanese Shuichi Nakano, who also found out about its unusual consistency. It was broken into many fragments of a diameter up to 1.2 miles, because of the comet’s close approach to Jupiter in 1992. The comet probably came under the strong gravitational forces of Jupiter already during the 1960s and was thus forced into a strongly elliptical orbit around the planet Jupiter as a quasi-satellite. It passed Jupiter within the Roche Limit and broke apart into the 21 segments.

The collision itself could not be seen from Earth because of its location, only the spacecraft Galileo could record the collision from the distance of 1,6AU. From Earth hot gas bubbles at Jupiter’s edge were detected and because of the short rotational periods of Jupiter, the impact was clearly visible from Earth a few minutes after the collision. Although, from the Earth’s point of view, the point of impact was just behind Jupiter’s “edge” and was therefore not directly visible, astronomers could see so-called “plumes” (hot gas bubbles, similar to an “atomic mushroom”) rising above Jupiter’s edge. Due to the rapid rotation of Jupiter, the impact points became visible from Earth only a few minutes after the impact. It turned out that they had left dark spots with diameters of up to 12,000 km in Jupiter’s atmosphere, which remained visible for months. 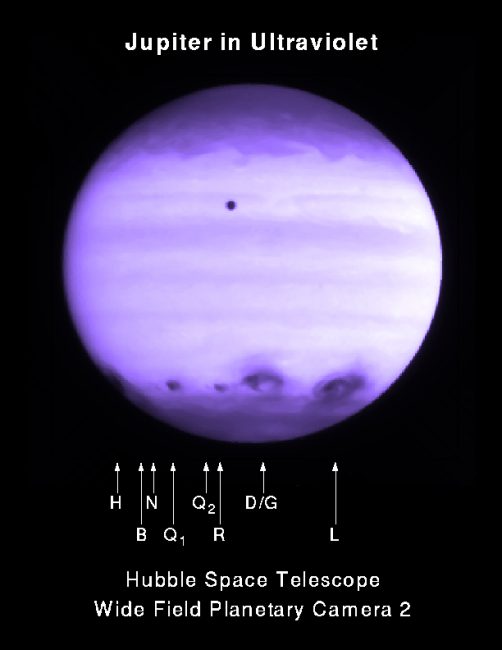 Dark spots in the atmosphere of the planet Jupiter after the impact of comet Shoemaker-Levy 9 (the point above is the Jupiter moon Io), ultraviolet image of July 21, 1994 (HST, NASA).

Due to the huge impact of the collision, astronomers were hopeful to get an idea of what the planet Jupiter looks like beneath its clouds.  In the plume spectra large amounts of molecular sulfur (S2) and carbon disulfide (CS2) were found, more than could have been released by the explosion of a comparatively small comet nucleus. One suspects the origin therefore in deeper atmospheric layers of Jupiter. Other detected molecules are carbon monoxide (CO), ammonia (NH3) and hydrogen sulfide (H2S). Emission lines of iron, magnesium and silicon were also observed: The heat of the explosions must have been enough to vaporize these metals. Water was observed in smaller quantities than initially expected. Probably the water molecules were split by the heat.