You are here: Home › physics › Augustin-Jean Fresnel and the Wave Theory of Light 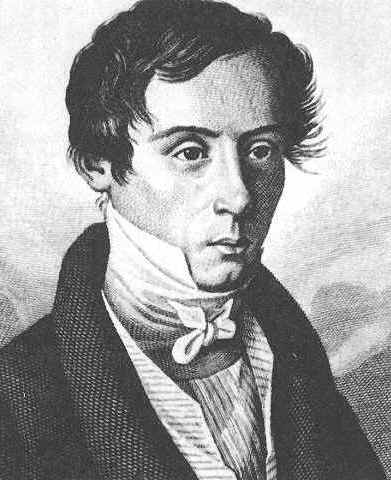 On March 10, 1788, French civil engineer and physicist Augustin-Jean Fresnel was born. Augustin-Jean Fresnel‘s research in optics led to the almost unanimous acceptance of the wave theory of light, excluding any remnant of Newton‘s corpuscular theory, from the late 1830s until the end of the 19th century.

“It’s not observation but theory that led me to this result that experience has confirmed afterwards.”
– Augustin-Jean Fresnel, explaining how he was led to discover the law characterizing interference fringes, in Œuvres complètes d’Augustin Fresnel. Imprimerie impériale. 1866. p. 61.

Augustin-Jean Fresnel was the son of an architect and suffered from a severe learning disability as a child, so that at the age of nine he was still unable to read. At thirteen he entered the École Centrale in Caen, and at sixteen and a half he entered the École polytechnique, which he completed with distinction as an engineer. Then he went to the École nationale des Ponts et Chaussées (National School of Bridges and Roads). He graduated in 1809  and entered the service of the Corps des Ponts et Chaussées as an ingénieur ordinair aspirant. At first he was assigned to the western département of Vendée where he anticipated what became known as the Solvay process for producing soda ash, except that recycling of the ammonia was not considered. At Nyons, Fresnel assisted in the development of the imperial highway that was to connect Spain and Italy.

Around 1815, Fresnel started his optical experiments. However, the first step towards the wave theory of light was probably made by Robert Hooke.[8] He developed a pulse theory and compared the spreading of light to that of waves in water in his 1665 work Micrographia. A few years later he suggested that light’s vibrations could be perpendicular to the direction of propagation. In 1678, the Dutch Dutch physicist, mathematician, astronomer Christiaan Huygens developed a mathematical wave theory of light. Huygens proposed that light was emitted in all directions as a series of waves in a medium called the Luminiferous ether.[5] As waves are not affected by gravity, it was assumed that they slowed down upon entering a denser medium. Thomas Young further demonstrated by means of a diffraction experiment that light behaved as waves.[7] Young further proposed that different colours were caused by different wavelengths of light, and explained colour vision in terms of three-coloured receptors in the eye. Leonard Euler argued that diffraction could more easily be explained by a wave theory in Nova theoria lucis et colorum.[8]

Polarization of Light and the Corpuscular Theory

André-Marie Ampère gave Augustin-Jean Fresnel an idea that the polarization of light can be explained by the wave theory if light were a transverse wave around 1816.[4] Fresnel managed to create his own theory of light. It was presented to the Académie des Sciences in 1817. Building on Augustin-Jean Fresnel’s work, Siméon Denis Poisson developed a convincing argument in favour of the wave theory, helping to overturn Newton‘s corpuscular theory.[9,6] In 1821, Fresnel was able to show via mathematical methods that polarisation could be explained by the wave theory of light and only if light was entirely transverse, with no longitudinal vibration whatsoever. However, a weakness of the theory included that light waves would need a medium for transmission. The existence of the hypothetical substance luminiferous aether proposed by Huygens in 1678 was cast into strong doubt in the late nineteenth century by the Michelson–Morley experiment. Isaac Newton‘s corpuscular theory implied that light would travel faster in a denser medium, while the wave theory of Huygens and others implied the opposite. Back then, the speed of light could not be measured accurately enough to decide which theory was correct. In 1850, it was Léon Foucault who was able to make the first sufficiently accurate measurement. Foucault’s results supported the wave theory, and the classical particle theory was finally abandoned, only to partly re-emerge in the 20th century.[10]

With François Arago Fresnel studied the laws of the interference of polarized rays. Some of their findings were summarized in 4 statements, the Fresnel-Arago laws. It produced circularly polarized light by means of a glass rhombus, known as Fresnel rhombus, with obtuse angles of 126° and acute angles of 54°. His work on optics received little public recognition during his lifetime, and many of his articles were only printed by the Académie des Sciences years after his death. 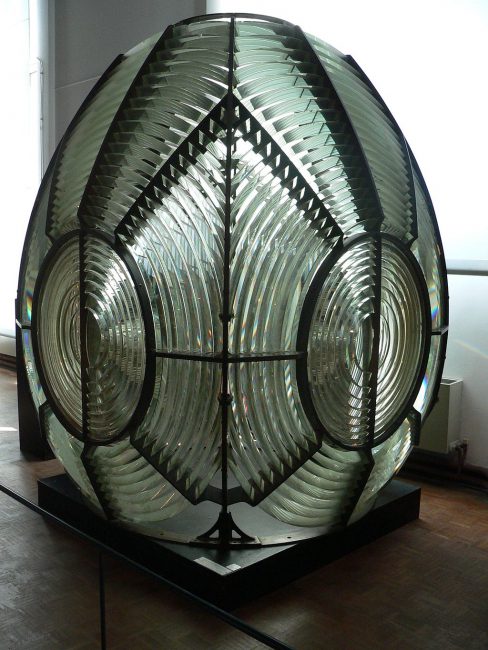 In the field of geometric optics, Fresnel invents the step lens (known as Fresnel Lens) used to increase the power of headlight lighting. It is still used in maritime lighthouses, but also in car headlamps and cinema projectors. Cheap, flexible models for wide-angle vision are now being made from Fresnel’s lens, or lenses at supermarket checkouts to check the contents of the cart.

Even though Fresnel  did not become a public celebrity in his short lifetime, Fresnel lived just long enough to receive due recognition from his peers, including the Rumford Medal of the Royal Society of London in 1824 “for his Development of the Undulatory Theory as applied to the Phenomena of Polarized Light, and for his various important discoveries in Physical Optics”, and his name is ubiquitous in the modern terminology of optics and waves. Inevitably, after the wave theory of light was subsumed by Maxwell’s electromagnetic theory in the 1860s, some attention was diverted from the magnitude of Fresnel’s contribution. Fresnel’s health, which had always been poor, deteriorated in the winter of 1822-3, increasing the urgency of his original research, and causing him to turn down an invitation from Young to write an article on double refraction for the Encyclopædia Britannica. In 1824 he was advised that if he wanted to live longer, he needed to scale back his activities.  Fresnel’s cough worsened in the winter of 1826-7, leaving him too ill to return to Mathieu in the spring. In early June he was carried to Ville-d’Avray, 12 km west of Paris.  On 6 July, Arago arrived to deliver the Rumford Medal. Sensing Arago’s distress, Fresnel whispered that “the most beautiful crown means little, when it is laid on the grave of a friend.” Fresnel did not have the strength to reply to the Royal Society. He died eight days later, on Bastille Day,  July 14, 1827.