You are here: Home › computer science › Konrad Zuse – The German Inventor of the Computer 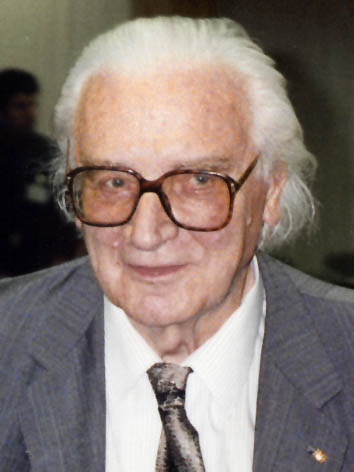 On December 18, 1995, German engineer and computer pioneer Konrad Zuse passed away. He is renowned to have constructed the very first functional program-controlled Turing-complete computer,which was freely programmable and provided binary floating point arithmetics: the Z3, which became operational in May 1941.

“The belief in a certain idea gives to the researcher the support for his work. Without this belief he would be lost in a sea of doubts and insufficiently verified proofs.”
– Konrad Zuse

Konrad Zuse was born in Berlin, Germany, on June 22, 1910, the son of Maria and Emil Zuse. When he was two years old, the family moved to Braunsberg in East Prussia, where his father worked as a postal clerk in the middle service. There he attended the humanistic grammar school Hosianum. In 1923, the Zuse family moved to Hoyerswerda, where he attended the Reform-Realgymnasium. At the age of 14 Zusse was already tinkering with inventions; “Zuse’s mandarin vending machine” issued fruit and change on coin insertion. At the age of 18 he assembled a coal loading crane with the metal construction kit of the Stabil company, for which he received the honorary certificate of the company. In 1927 he graduated from high school.

At the age of 17, Zuse studied mechanical engineering at the Technical University Berlin-Charlottenburg (today Technical University Berlin), then switched to architecture and finally to civil engineering. Early on he discovered his preference for technology and art. Right after graduating in 1935, the inventor quit his promising engineering job at Henschel Flugzeugwerke AG, a company, responsible for transport machines and aircrafts. When he told his parents, he needed their entire living room to construct a machine that was able to do the moronic work of calculating automatically, he earned much astonishment, but also their complete support. Zuse had the gift of infecting people with his enthusiasm in such a way that they kept giving him money – his father even had himself reactivated from retirement to co-finance development – or donated working time.

So this is, where one of the greatest inventions of all times started – in an ordinary family’s living room in Berlin-Kreuzberg, just a few years before World War II. Zuse was going to build a binary calculating machine based on mechanical bistable elements continuing the works of the congenial 19th century English mathematician Charles Babbage.[6] Also, the entire machine was supposed to be based on propositional logic, which he developed the famous floating-point execution unit for. Zuse built a memory, as well as a control unit made of punched tape, which he received from the Babelsberg film studios and finished his first mechanical computer, the Z1 in 1938. [1] Because of the limited resources, Konrad Zuse was not quite satisfied with this new very loudly calculating “monstrosity” he had created at his parent’s home. He made a few adjustments, like using telephone-relays and designed the Z2 right after. He refined further details and partly financially supported by the government, Konrad Zuse was able to finish his famous Z3, the first computer world wide that was freely programmable and based on the binary number system as well as a binary circuit technology in 1941. 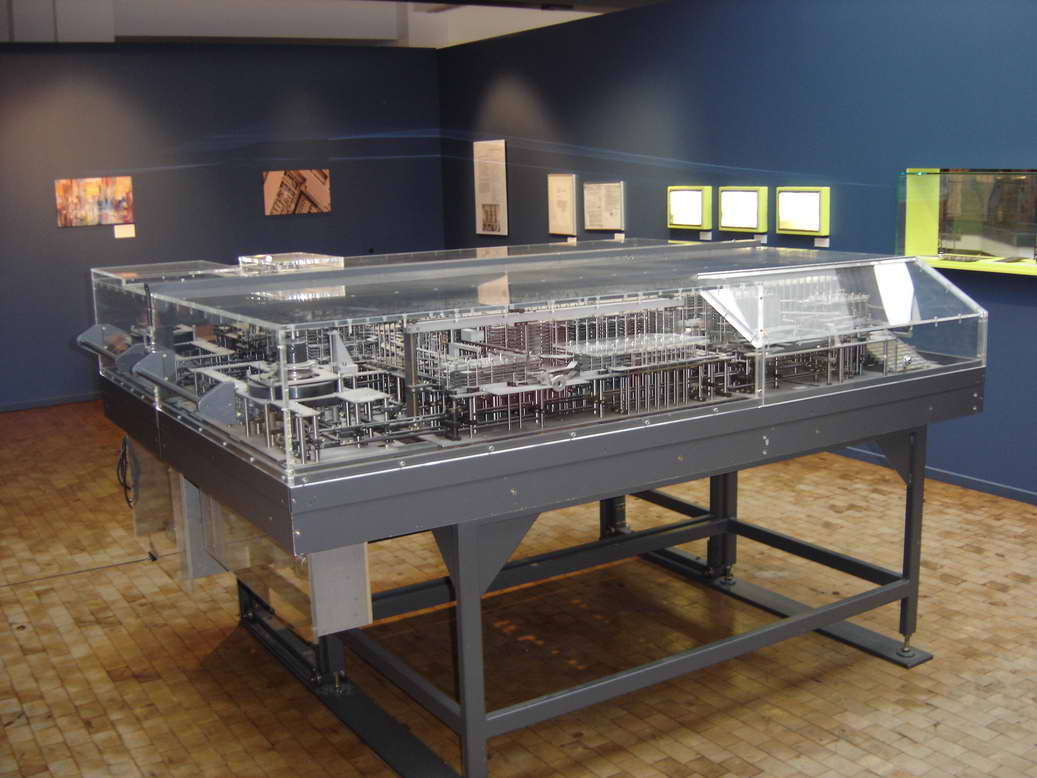 Zuse Z1 replica in the German Museum of Technology in Berlin

During the Second World War, Konrad Zuse was called up twice, but never took part in any acts of war. With the help of Herbert Wagner – head of special department F at Henschel Flugzeug-Werke AG, in which remote-controlled sliding bombs were developed – he was able to make him “indispensable” and employed by Henschel-Werke. There he worked on the sliding bomb Hs 293 and developed special computers for wing measurement.  He came up with the idea of mechanizing the reading of the dial gauges. The measuring instruments built for this purpose were the first analog-to-digital converters. In 1944 Zuse realized the first process control by computer in an outsourced factory of Henschel-Flugzeug-Werke in Warnsdorf in the Sudetenland. The importance of Zuse’s work is also shown by the fact that he was able to found “Zuse Ingenieurbüro und Apparatebau, Berlin” in the middle of the war in 1941, which last employed 20 people. It was the only company in Germany that was allowed to develop computers. Even though Zuse never became a member of the NSDAP, he showed no discernible reservations against the work in the arms industry during the war. Documents from Zuse’s estate prove how “Armament factories and Nazi institutions financed Zuse’s computers with over 250,000 Reichsmark”. 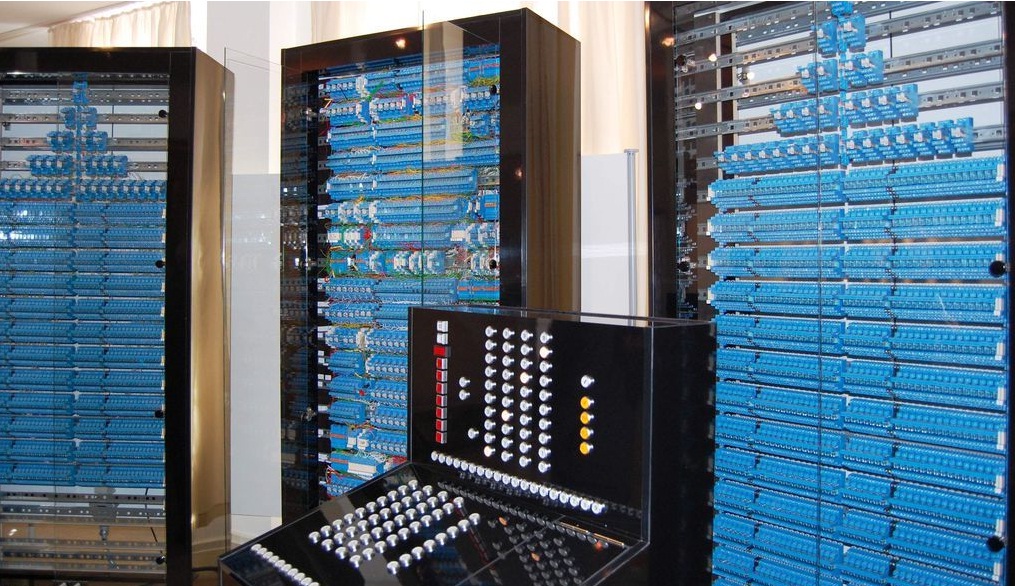 “The rattling of the relays of the Z4 was the only interesting thing to be experienced in Zurich’s night life!”
– attributed to Zuse in:[13]

The further development of the Z3 was also supported by the German Aviation Research Institute.  The construction of the Z4 began in 1942, but due to World War II, Zuse could not finish it in Berlin, wherefore he moved it to Neukirchen in Hessen, Germany. The Z4 was again an electromechanical computer built from relays. Until then all computers had been named with the initial letter Z like “Zuse”. One employee had the idea to call the device V4 to suggest that it was a retaliation weapon like the V1 and V2. Under this camouflage it was possible to organize a transport to Göttingen towards the end of the war, where the Z4 was completed in March 1945 at the KWI’s Aerodynamische Versuchsanstalt für Strömungsforschung. You may imagine, that moving a whole computer system (as big as a whole shelf unit and as heavy as a small car) in Germany near the end of the war was definitely not a walk in the park. Because all other machines have been destroyed by the bombs, the Z4 was everything he had left and therefore the move was even more risky. On this occasion, Zuse also got to see the Mittelbau-Dora concentration camp and the working conditions of the forced laborers. He succeeded in joining Wernher von Braun’s research group, which fled to Bavaria.

After several stopovers Zuse’s group came to Hinterstein in the Allgäu. The Z4 was rebuilt in the flour warehouse of a bakery in Hopferau near Füssen. The inventor kept his family afloat by painting chamois in oil for US tourists and supported local farmers in settling their milk yields. The rumour of the Z4 got around, however. IBM was interested in intellectual property rights in order to suppress further development. With the Zurich Remington Rand, a cooperation for program-controlled calculating punches was established. In 1949, Prof. Eduard Stiefel of ETH Zurich tracked down Zuse in the Allgäu and had the suitability of the Z4 for his research demonstrated to him. A generous rental agreement was concluded with him, which provided Konrad Zuse with the necessary funds to found Zuse KG. In 1950 the Z4 was the only functioning computer in Central Europe and the first commercial computer worldwide. It was installed a few months earlier than UNIVAC.[8] Zuse and his wife, who lead the business sold more than 250 computers across Europe. After that he worked as a consultant and wrote his book “Rechnender Raum” (Computing Space), in which he developed a theory of cellular automatons and applied it to cosmology, similar to Stephen Wolfram later on. He thus laid one of the foundations of digital physics..

In 1937, while working on his first computer, Zuse rediscovered the propositional calculus. While working on the Z4, he realized that programming in machine language was too complex and that a higher programming language would therefore be necessary. At first he thought that Esperanto could do this. In the years 1942/46, when Zuse could not work practically due to the war events, he designed the “Plankalkül“, but could not publish it. In the winter semester of 1948/49 Zuse was able to present his applied logic in the logic colloquia of Wilhelm Britzelmayr at the Ludwig-Maximilians-Universität in Munich. The idea of higher programming languages was not taken up again until ten years later, when languages such as Fortran, Algol and Cobol were designed. The “Plankalkül” would have been more universal than these languages, but was not implemented until 1975 in the context of a dissertation by Joachim Hohmann.

Wo invented the computer?

Another problem, regarding the Z3 was Zuse’s recognition as the inventor of the Computer. Howard Aiken presented the Mark 1 in 1944 in the USA,[7] but Zuse’s Z3 was destroyed during World War II and only some sketches had remained. However, he could collect numerous evidences for his achievement and during a mathematical conference concerning the fact ‘Who invented the Computer‘, a huge majority spoke for Konrad Zuse. Unfortunately, this was in 1998, three years after Zuse’s passing, but after this, he received the Computer History Museum Fellow Award, to be seen as the USA’s acknowledgement. Also, in 2010, the ‘Zuse Year’ was announced to honor his contributions and to emphasize the importance of his invention to the digital age.