You are here: Home › cinematography › The Kinetoscope and Edison’s Wrong Way to Invent the Cinema 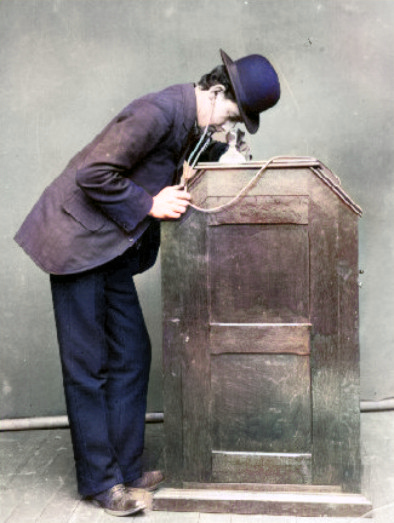 On April 14, 1894, chief engineer William K. L. Dickson in the team of Thomas Alva Edison, presents the newly invented Kinetoscope, an early motion picture exhibition device designed for films to be viewed by one individual at a time through a peephole viewer window at the top of the device.

Ok, according to Edison, the cinema would never have become the silver screen you know, but would have remained a cheap fairground attraction. The movies Edison produced and presented in his Kinetoscopes worked more or less like in a peep show. You stand in front of the apparatus, looking into it from the top, insert a nickle and follow the most times funny movies of only a few minutes length. That’s it. Can you imagine that a movie like Star Wars would have been produced if cinema would just have stayed like that? I doubt. But, let’s have a look at Edison’s invention of the movie industry.

The works and ideas of photographic pioneer Eadweard Muybridge [3] appear to have spurred Thomas A. Edison [4] to pursue the development of a motion picture system. On February 25, 1888, in Orange, New Jersey, Muybridge gave a lecture that may have included a demonstration of his zoopraxiscope, a device that projected sequential images drawn around the edge of a glass disc, producing the illusion of motion. Two days later, Muybridge and Edison met at Edison’s laboratory in West Orange to talk about a collaboration to join Muybridge’s device with the Edison phonograph — a combination system that would play sound and images concurrently. But, the collaboration never happened. Moreover, in October 1888, Edison filed a preliminary claim, known as a caveat, with the U.S. Patent Office announcing his plans to create a device that would do “for the Eye what the phonograph does for the Ear”. In March 1889, a second caveat followed, which gave a name to the proposed motion picture device, the Kinetoscope, derived from the Greek roots kineto- (“movement”) and scopos (“to view”).

Edison assigned Dickson, one of his most talented employees, to the job of making the Kinetoscope a reality. Edison‘s original idea involved recording pinpoint photographs, 1/32 of an inch wide, directly on to a cylinder with a synchronized audio cylinder for sound recording. Although expanded in later testing, the coarseness of the silver bromide emulsion used on the cylinder became unacceptably apparent. Thus, they tried sensitized celluloid sheets wrapped around the cylinder, providing a far superior base for the recording of photographs. The first film made for the Kinetoscope, and apparently the first motion picture ever produced on photographic film in the U.S., may have been shot at this time, known as Monkeyshines, No. 1, it shows an employee of the lab in an apparently tongue-in-cheek display of physical dexterity. Attempts at synchronizing sound were soon left behind.

35 mm filmstrip of the Edison production Butterfly Dance (ca. 1894–95), featuring Annabelle Whitford Moore, in the format that would become standard for both still and motion picture photography around the world

A trip of Edison‘s to Europe and the Exposition Universelle in Paris in 1889 gave Edison new ideas for the realization of his Kinetoscope. There, he met scientist-photographer Étienne-Jules Marey,[6] who had devised a “chronophotographic gun“, the first portable motion picture camera. He also came across early European film pioneers like French inventor Charles-Émile Reynaud, who used images painted on gelatine frames as well as German inventor Ottmar Anschütz. Their crucial innovation was to take advantage of the persistence of vision theory by using an intermittent light source to momentarily “freeze” the projection of each image; the goal was to facilitate the viewer‘s retention of many minutely different stages of a photographed activity, thus producing a highly effective illusion of constant motion. 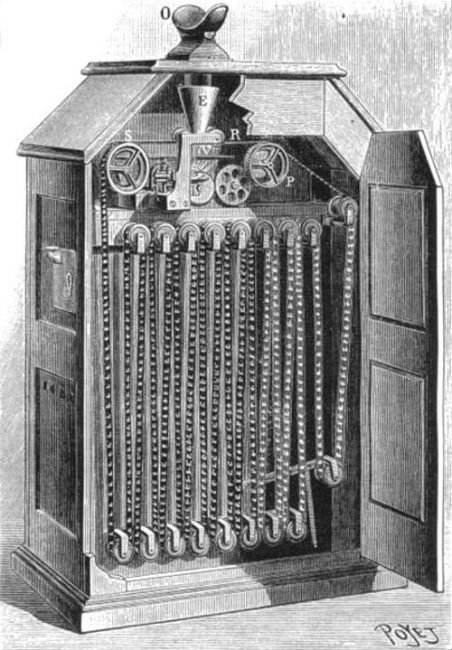 Interior view of Kinetoscope with peephole viewer at top of cabinet

The Invention of Cinema

By early 1891, however, Edison‘s team had succeeded in devising a functional strip-based film viewing system. In the new design, whose mechanics were housed in a wooden cabinet, a loop of horizontally configured 19 mm (3/4 inch) film ran around a series of spindles. The film, with a single row of perforations engaged by an electrically powered sprocket wheel, was drawn continuously beneath a magnifying lens. The lab also developed a motor-powered camera, the Kinetograph, capable of shooting with the new sprocketed film. On May 20, 1891, the first public demonstration of a prototype Kinetoscope was given at the laboratory for approximately 150 members of the National Federation of Women‘s Clubs.

The first U.S. copyright for an identifiable motion picture was given to Edison for Fred Ott’s Sneeze.

The New York Sun described what the club women saw in the “small pine box” they encountered: In the top of the box was a hole perhaps an inch in diameter. As they looked through the hole they saw the picture of a man. It was a most marvelous picture. It bowed and smiled and waved its hands and took off its hat with the most perfect naturalness and grace. Every motion was perfect…On April 14, 1894, the first commercial exhibition of motion pictures in history was given in New York City, using ten Kinetoscopes. This can be considered the birth of American movie culture.

At yovisto academic video search you can watch some of the early kinetoscope productions from Edison’s filmstudios from the years 1894-1896.