You are here: Home › history › Samuel Johnson and his Famous Dictionary 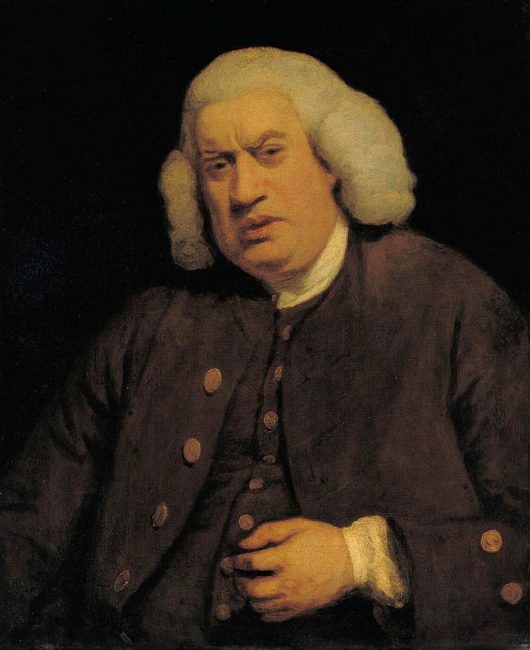 On April 15, 1755, after nine years of intensive labor, Samuel Johnson publishes his “Dictionary of the English Language”, sometimes published as Johnson‘s Dictionary. It is among the most influential dictionaries in the history of the English language.

“I am not yet so lost in lexicography, as to forget that words are the daughters of earth, and that things are the sons of heaven. Language is only the instrument of science, and words are but the signs of ideas: I wish, however, that the instrument might be less apt to decay, and that signs might be permanent, like the things which they denote.” – Samuel Johnson

Samuel Johnson showed signs of great intelligence quite early and his parents decided to start his educational program, when he was only three years old. At the age of nine, he was already promoted to the upper school. The financial situation of the Johnson family decreased and next to his studies, the young Samuel began stitching books. He entered the entered Pembroke College at Oxford in 1728 and also began writing several poems. Due to financial issues, Johnson had to leave Pembroke early without a degree.

Johnson spent a lot time looking for positions where a degree was not necessary and taught for a while under Wolstan Dixie, 4th Baronet. After an argument with his wife however, Johnson had to look for a different position. During this period, Johnson spent much time with his friend Edmund Hector, who was living in the home of the publisher Thomas Warren. Johnson was asked for help with his Birmingham Journal, which improved his connection to Warren.

Johnson lived with his friend Harry Porter, who was suffering from an incurable disease. When Harry Porter died on September 3, 1734, he left behind his wife of 45 years, Elizabeth “Tetty” Jervis Porter, and three children. Samuel Johnson married the widow, 21 years his senior, on July 9, 1735, at St. Werburgh Church in Derby. Elizabeth Porter brought £800 sterling to the marriage. Her family did not approve of the marriage, and her son broke off all contact with her in protest.When in 1735, Johnson had applied unsuccessfully for the position of headmaster at Solihull School, he made the conclusion that he would become a successful teacher only if he ran his own school. In the same year, Johnson opened Edial Hall School as a private academy with only 3 students at first. However, the school turned out to be unsuccessful. Many historians assume, that the Tourette syndrom he was suffering from was responsible for his failing as a schoolmaster.  Johnson soon found employment as a writer for The Gentleman’s Magazine and moved to London.

When that venture failed, Johnson went to London in 1737 with his pupil, the later famous actor David Garrick, to perform his rhymed tragedy Irene, but failed. He published parliamentary reports for the Gentleman’s Magazine. He became known for several poems, such as the satire London (1738), an imitation of Juvenal‘s third satire, in which he castigated the vices and follies of the British capital with wit and irony. This was followed by The Debates of the Senate at Lilliput, annotated excerpts from the speeches of the most famous members of parliament of the time, and in 1744 a biography of his friend, the poet Richard Savage.

Between 1747 and 1755 Johnson compiled the Dictionary of the English Language (1755, 2 vols.), which appeared in its 6th edition in 1758 and has influenced all similar lexicons of the English language to the present day. Noah Webster compared Johnson’s achievement in lexicography to that of Isaac Newton in mathematics. Four features set the dictionary apart from its English predecessors:

When in 1746, a group of publishers had approached Johnson with an idea about creating an authoritative dictionary of the English language, Johnson agreed and claimed to be finished in three years. He did finish the work ‘only’ after nine years, but in comparison, the Académie Française had forty scholars spending forty years to complete their dictionary. Even though, the dictionary was later also criticized, it was still referred to as “one of the greatest single achievements of scholarship, and probably the greatest ever performed by one individual who laboured under anything like the disadvantages in a comparable length of time“. Johnson’s Dictionary became the most commonly used and imitated for the 150 years between its first publication and the completion of the Oxford English Dictionary in 1928. It is said, that Johnson’s Dictionary offered insights into the 18th century and “a faithful record of the language people used”. 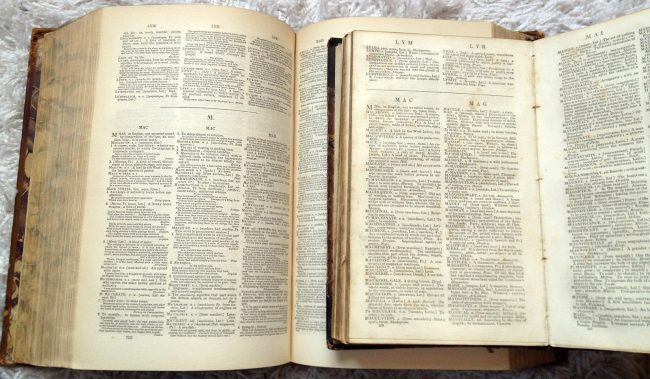 The Dictionary was finally published in April 1755, with the title page acknowledging that Oxford had awarded Johnson a Master of Arts degree in anticipation of the work. It contained 42,773 entries and an important innovation in English lexicography was to illustrate the meanings of his words by literary quotation, of which there were approximately 114,000. Next to writing his dictionary, Johnson also spent the nine years writing several essays and poems. He produced a series titled as “The Rambler” which were published every Tuesday and Saturday. The popularity of The Rambler took off once the issues were collected in a volume, they were reprinted nine times during Johnson’s life.

In 1762, a pension of 300 pounds sterling granted by the government relieved him of acute financial needs, for which he expressed his gratitude through two pamphlets of political content – The False Alarm (1770) and Taxation No Tyranny (1775). His Shakespeare edition (1765, 8 volumes), which has become epoch-making in literary history, also falls into this period. Although Johnson’s characterization of Shakespearean drama betrays the prevailing French influence of the time, especially the view, also shared by Denis Diderot, of the moralizing tendency of bourgeois drama (“stirring play”), his view of Shakespeare, on the other hand, breaks through the hitherto common critical views of the age. While Johnson saw in the ancient writers the high “art” represented, he sees in Shakespeare, similar to John Milton, the poet of “nature”. Johnson was the first in England not to condemn Shakespeare for his mixing of the tragic and the comic or his neglect of the “unity of place and time.”

The literary fruit of a trip to Scotland and the Hebrides in 1773 was his Journey to the Western Isles of Scotland (1775), which involved him in a fierce feud with James Macpherson because of the doubt he expressed in it about the authenticity of Ossian’s poetry. At the age of 70, Johnson wrote The Lives of the Most Eminent English Poets, 1779-1781 for a collection of the English classics. He died on December 13, 1784, and was buried in London’s Westminster Abbey.