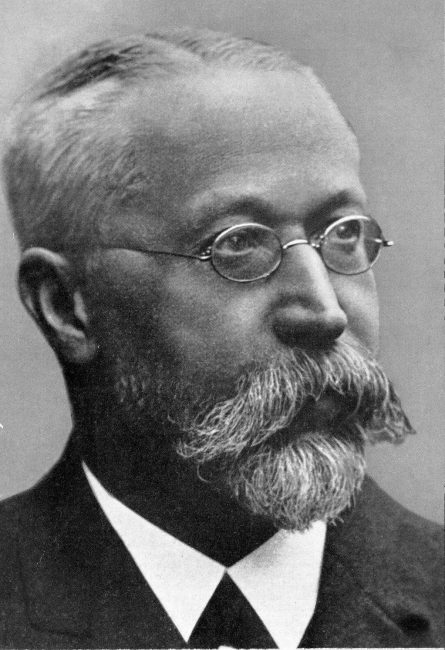 On June 6, 1850, inventor, engineer, and Nobel laureate Karl Ferdinand Braun was born. Braun was particularly instrumental in making electromagnetic radiation, which had been experimentally proven by Heinrich Hertz [1] in 1888, usable for communications technology.

Karl Ferdinand Braun was born in Fulda, Germany as the sixth of seven children of the Electoral Hessian court official Konrad Braun, he attended the Fulda Cathedral Grammar School. After graduating from high school, he studied mathematics and natural sciences at the Philipps University in Marburg in 1868/69.  In 1869 Braun went to Berlin, where he was allowed to work in the private laboratory of Heinrich Gustav Magnus [2], which was considered a special distinction. After Magnus’ death in the spring of 1870, Braun continued his studies with Georg Hermann Quincke. He received his doctorate in physics on string vibrations from Quincke in 1872 and followed him as an assistant at the University of Würzburg from 1872 to 1874.

Since Braun had no money to work as an assistant and later as a private lecturer, he passed the state examination for grammar school teachers in Marburg in 1873 and took up employment the following year as a second teacher of mathematics and natural sciences at the Thomasschule in Leipzig. There he carried out scientific investigations of oscillation and current conduction on the side, during which he made his first major discovery. He commented on this in the Annalen der Physik und Chemie (Annals of Physics and Chemistry) of 1874:

“… in a large number of natural and artificial sulfur metals … the resistance of these differed with the direction, intensity and duration of the current. The differences amount to as much as 30% of the whole value“.

This rectifying effect on lead sulfide crystals contradicted Ohm’s law, but nevertheless received little attention. However, it established the scientific reputation of Ferdinand Braun. Despite intensive research, Braun was unable to provide an explanation for this effect throughout his life. At that time, the physical foundations were still lacking – this was only achieved in the 20th century with the findings of quantum physics. Nevertheless, he is considered the discoverer of the semiconductor diode in 1874. During his time in Leipzig, Braun wrote his only book: “Der junge Mathematiker und Naturforscher – Einführung in die Geheimnisse der Zahl und Wunder der Rechenkunst” (The Young Mathematician and Natural Scientist – Introduction to the Secrets of Number and the Wonders of Arithmetic), which was published in 1876 and went through several editions, the last of which was in 2000. With this book, he wanted to awaken his students’ interest in the mathematical and physical laws of nature.

In 1877 Braun was appointed associate professor of theoretical physics in Marburg. He went to Strasbourg in 1880 and in 1883 received a full professorship in physics at the University of Karlsruhe. Here he developed the electric pyrometer in 1884. In 1884 he received a call to the Eberhard Karls University in Tübingen, where he played a leading role in the founding and development of the Institute of Physics. Here, in 1887, he also described the Le Chatelier-Braun principle (principle of the smallest constraint) and developed Braun’s electrometer. Shortly thereafter, in 1889, the first demonstration of Braun’s tube took place, which still had a cold cathode and only a slight vacuum. Today, Braun’s Tube is always understood to mean a high-vacuum tube in which an electron beam can be deflected in the horizontal and vertical directions. The first version, created in Strasbourg in 1897, was far from perfect: it had only a cold cathode and a moderate vacuum, which required 100,000 V accelerating voltage to detect a tracer of the magnetically deflected beam. Also, the magnetic deflection involved only one direction; the other ran through a rotating mirror set up in front of the luminous surface. However, industry was immediately interested in this invention, which is why it was immediately developed further. As early as 1899, Braun’s assistant Zenneck introduced tilt oscillations for magnetic Y deflection, followed later by incandescent cathode, Wehnelt cylinder and high vacuum. This tube could not only be used for oscilloscopes, but was also used for the first time by Manfred von Ardenne as a fundamental component in the first fully electronic television transmission on December 14, 1930, as a so-called picture tube for television sets, although Braun himself had described it as unsuitable for television.

With the invention of his tube, Braun also began to research the field of wireless telegraphy. One problem in wireless technology was a reliably functioning receiver: As a physicist, Braun was used to dealing with reproducible experimental conditions, but the coherer receivers commonly used at the time hardly met these conditions. So Braun replaced the coherer with a crystal detector, which was a major advance in receiver sensitivity at the time – even though the crystal detector had to be readjusted again and again. Only the electron tube was able to replace the crystal detector, but it continued to be used in simple receivers for some time – along with germanium diodes, for example. The first VHF radar systems also still used a detector.

Marconi and the Nobel Prize

In 1895, he became director of the Institute of Physics and professor at the Kaiser Wilhelm University in Strasbourg. After the invention of wireless telegraphy in 1898, he was one of the co-founders of Funkentelegraphie GmbH in Cologne. Braun invented the phased array antenna in 1905. Braun’s British patent on tuning was used by Marconi in many of his tuning patents. In 1909, Braun shared the Nobel Prize for physics with Marconi [6] for “contributions to the development of wireless telegraphy.” He described in his Nobel Prize lecture how he carefully arranged three antennas to transmit a directional signal.[8] This invention led to the development of radar, smart antennas, and MIMO. What was clear, however, was that wireless telegraphy already was profoundly changing the way the world communicated. It was for this reason that the Nobel Prize Committee recognized the separate, but equally important, complementary wireless telegraphy achievements of Braun and Marconi. While Marconi’s accomplishments were more spectacular and much more highly publicized, Braun’s achievements were no less important to the overall development of wireless telegraphy.[10]

In 1903, Braun co-founded the Telefunken company in Berlin. The latter took him to New York at the age of 64 and in failing health: the large-scale radio station Sayville, the counterpart to Nauen, was to cease operations due to patent disputes with the Marconi Corporation. The lawsuit dragged on, whereupon Braun was surprised by the U.S. entry into the war and was therefore no longer allowed to travel back.  During World War I, he lived largely undisturbed in Brooklyn as a wartime internee until he died on April 20, 1918, as the result of an accident.

His wish was to be buried in his hometown of Fulda. Since a transfer was not possible during the First World War, his son Konrad only succeeded in transferring the urn with the mortal remains to Fulda in 1921. Among his students, Jonathan Zenneck, a pioneer of ionospheric research, as well as Leonid Isaakovich Mandelstam and Nikolai Dmitrievich Papalexi, the founders of Russian high-frequency technology, should be mentioned.