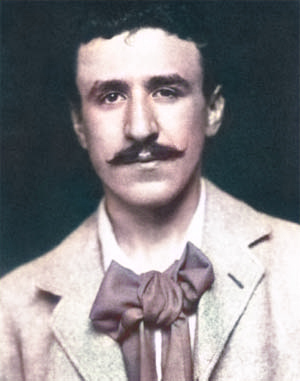 On June 7, 1868, Scottish architect, designer, water colorist and artist Charles Rennie Mackintosh was born. He was influential on European design movements such as Art Nouveau and Secessionism. Mackintosh is considered an influential precursor and protagonist of Modern Art. His austerely designed chairs with high backs became design icons and are still being reproduced to the present day.

“Art is the Flower – Life is the Green Leaf. Let every artist strive to make his flower a beautiful living thing, something that will convince the world that there may be, there are, things more precious more beautiful – more lasting than life itself…”
– Charles Rennie Mackintosh, Lecture, “Seemliness” (Glasgow, 1902)

Charles Rennie Mackintosh grew up as the second of eleven children; his father William MacIntosh was a chief inspector in the police, his mother Margaret a housewife. His father, a passionate amateur gardener, encouraged his children to actively work in the garden. This may have been the basis for his later floral design elements. He also did a lot of drawing during rural excursions with the family: houses, plants, and animals. In 1884, at the age of 16, against his father’s wishes, he joined the architectural firm of John Hutchinson, as he showed early artistic ability. From this time he also attended evening classes at the School of Arts and Crafts. Here, with his friends Herbert MacNair and sisters Margaret and Frances Macdonald, he became known as The Four with notable contributions to the burgeoning Glasgow Style of British Art Nouveau. After five years of training, he left the office in 1889 and joined the newly formed office of Honeyman and Keppie as a draftsman. In 1890 he won a travel grant and was thus able to spend several months in Italy in 1891. By this time he had already won several awards for drawings, paintings (including watercolors), and architecture.

His outstanding work is the Glasgow School of Art at 167 Renfrew Street, begun in 1896, whose rectangular structure is largely austere, clear and seemingly unadorned in design. The firm of Honeyman and Keppie had won the competition, and the design was by Mackintosh. From 1907 to 1909, a library was added, which, including the furniture, was also based on a design by Charles Rennie Mackintosh. Here, too, right angles and straight lines dominate. Mackintosh also made a name for himself as an interior designer in the same year, 1896, with his Art Nouveau designs for the Cranston tea room chain, the realization of which can be seen in the Willow Tearooms in Glasgow. He designed buildings, furniture and interiors without financial or artistic constraints, which included his famous chair designs. The Glasgow School and the Tearooms now quickly helped Mackintosh to international fame. 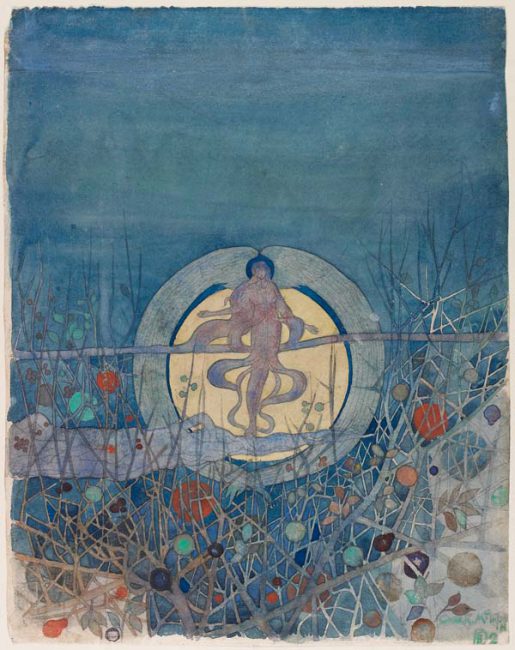 In 900 Mackintosh and his wife participated very successfully in the VIII. Exhibition of the Vienna Secession. In the period from 1900 to 1902 Mackintosh created not only significant architecture, but also interiors. He designed the Daily Record’s publishing house in 1901, and in the same year entered the magazine Interior Decoration’s competition for construction including the interior and exterior design of an art lover’s house;[ these design drawings were seminal to architectural developments in Europe. Here, as in the Hill House, he combined all-white and dark oak paneled rooms. The famous Hill House was built between 1902 and 1904 in Helensburgh, north of Glasgow. Many of his projects, including the Hill House, were “total works of art” of architecture and design: design of the exterior frontage, interiors, including furniture, textiles, etc. His white interiors exerted great influence on Joseph Maria Olbrich, as well as the architects and designers of the Wiener Werkstätte Josef Hoffmann and Koloman Moser. The patron of the Vienna Secession and then the Wiener Werkstätte Fritz Wärndorfer commissioned him to design a music salon in 1902. As with many other artists of his time, influences of Japonism were evident. 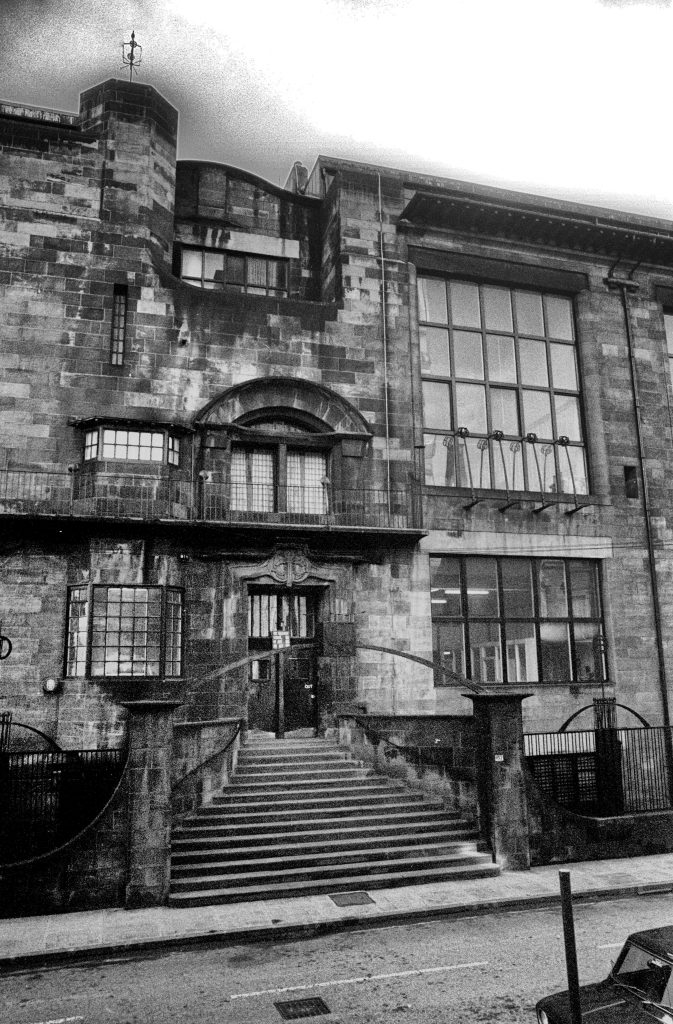 Together with Mackay Hugh Baillie Scott, he designed serial furniture and utilitarian objects for the furniture manufacturer Karl Schmidt-Hellerau. The artists were given a share of the sales and their names were included in the product catalogs of Deutsche Werkstätten Hellerau, which was a novelty at the time. In 1903/1904, their works were shown in the exhibition Heirat und Hausrat in Dresden. Mackintosh – after having worked out numerous successful plans on behalf of the architectural firm Honeyman and Keppie – was able to join as a partner in 1904 and remained until 1913. 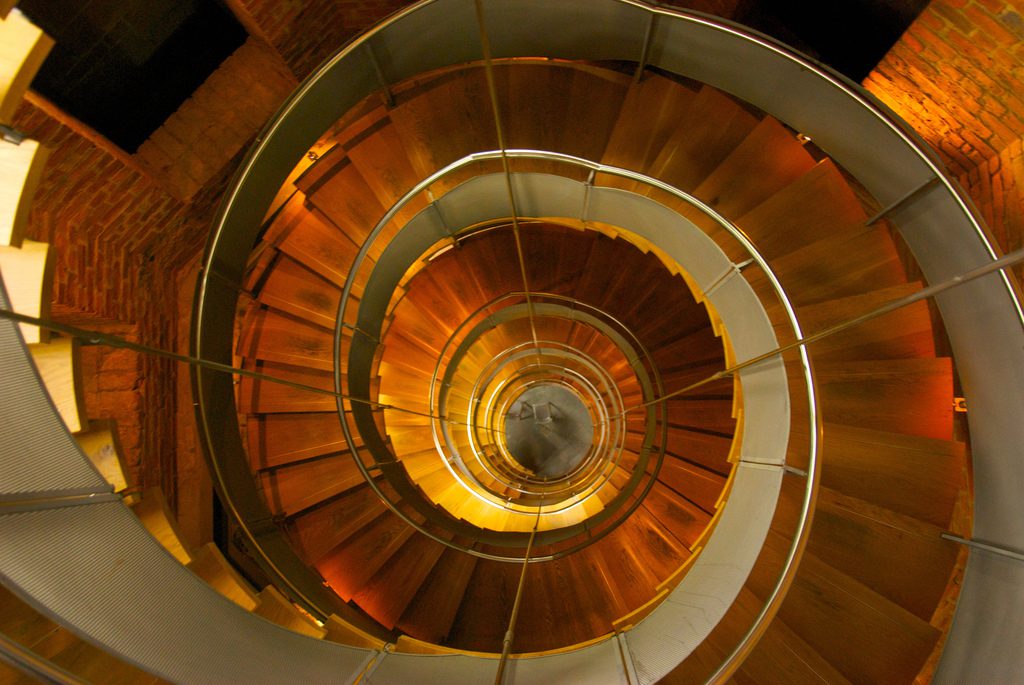 The spiral staircase at the Lighthouse in Mitchell Lane, Glasgow, photo: George Gastin

Life during the war became difficult. Mackintosh earned some money by designing “rhythmically patterned” textiles in bright colors for Foxton’s and Selfton’s, which already bore traits of the later Art Deco. Although he remained in possession of all his skills, none of his subsequent projects – e.g. designs of factory buildings and building complexes for stores and offices – were realized. His last architectural project in 1920, a radical theater building for Margaret Morris in London, Chelsea, was not approved by the authorities. Close to financial ruin, the Mackintoshes decided to move to the Pyrenees, where the cost of living was lower than in London. Via Ille-sur-Têt they came to Mont-Louis. Also, the altitude of 1,600 m was to ease Mackintosh’s failing health. During the winter months of 1925 and 1926, they stayed at the Hotel du Commerce in Port-Vendres, a short distance away. Mackintosh increasingly painted watercolors of motifs in the surrounding area. 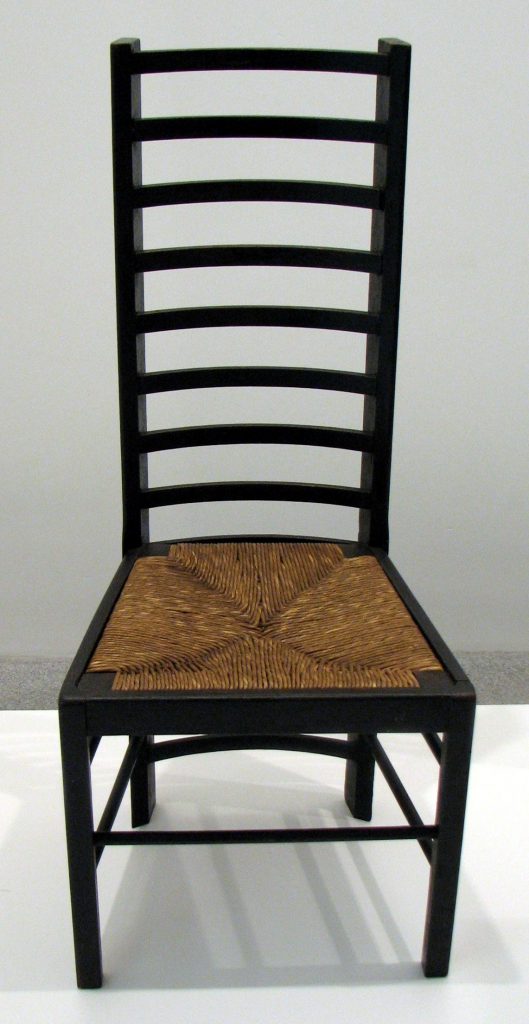 While his wife was in London for medical reasons, Mackintosh’s disastrous financial situation became apparent in his letters to Margaret: he was worried about money for painting utensils and postage. After Margaret’s return, they stayed again in Mont-Louis before Mackintosh became very seriously ill: in 1927, he was diagnosed with tongue cancer in London. He could not pay for the treatment himself. Penniless, they wandered around London until Mackintosh died. After Margaret’s death, four years later, the estate – deemed worthless – was sold for a few pounds: Already after Mackintosh’s death, a mahogany secretary was sold for 21 pounds, which was bought back in 1979 for a million pounds.