You are here: Home › physics › Herbert Eugene Ives and the Ives-Stilwell Experiment 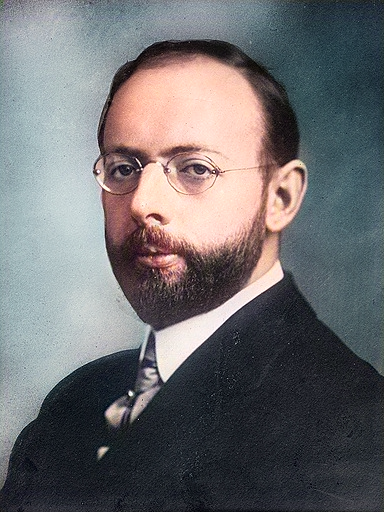 On November 13, 1953, US-American scientist and engineer Herbert Eugene Ives passed away. Ives headed the development of facsimile and television systems at AT&T. He is best known for the 1938 Ives–Stilwell experiment, which provided direct confirmation of special relativity’s time dilation, although Ives himself did not accept special relativity, and argued instead for an alternative interpretation of the experimental results.

Herbert Eugene Ives was born on July 31, 1882 in Philadelphia, Pennsylvania, USA, the son of to Frederic Eugene Ives and Mary Olmstead. He studied at the University of Pennsylvania and the Johns Hopkins University, where he graduated in 1908. Just like his father, Herbert Ives became an expert in color photography. In 1924, he he demonstrated 185-line long-distance television, transmitting the live video images of then-Secretary of Commerce Herbert Hoover via AT&T’s experimental station 3XN in Whippany, New Jersey, allowing media reporters to both see and communicate with Hoover.

By 1930, Ives’ two-way television-telephone system was in regular experimental use. Bell Labs’ large New York City research facility devoted years of research and development through the 1930s, led by Ives with his team of more than 200 scientists, engineers and technicians. After years of ongoing research on audio and video telephones at Bell Labs, Ives and numerous researchers managed to develop  AT&T’s futuristic Picturephone.

After the philosophy of Hendrik Lorentz, Herbert Eugene Ives attempted to demonstrate the physical reality of relativistic effects by means of logical arguments and experiments. Ives became best known for conducting the famous Ives–Stilwell experiment. It provided direct confirmation of special relativity’s time dilation. The Ives–Stilwell experiment tested the contribution of relativistic time dilation to the Doppler shift of light. The result was in agreement with the formula for the transverse Doppler effect, and was the first direct, quantitative confirmation of the time dilation factor. Since then, many Ives–Stilwell type experiments have been performed with increased precision. Together with the Michelson–Morley and Kennedy–Thorndike experiments, it forms one of the fundamental tests of special relativity theory.

And a Wrong Interpretation

However, Ives himself regarded his experiment as a proof of the existence of the ether and hence, as he erroneously suggested, a disproof of the theory of relativity. He was further discouraged by the reaction of the scientific community that had interpreted his experiment in the way opposite to his expectations.

Ives held honorary degrees from Yale University, Dartmouth College, and the University of Pennsylvania. In 1951, he received the Rumford Prize of the American Academy of Arts and Sciences. For his service in World War II, he received the Medal for Merit in 1948 for his war-time work on blackout lighting and optical communication systems.  He was an avid coin collector and served as president of the American Numismatic Society from 1942 to 1946.