You are here: Home › chemistry › Joseph Louis Gay-Lussac and his Work on Gases 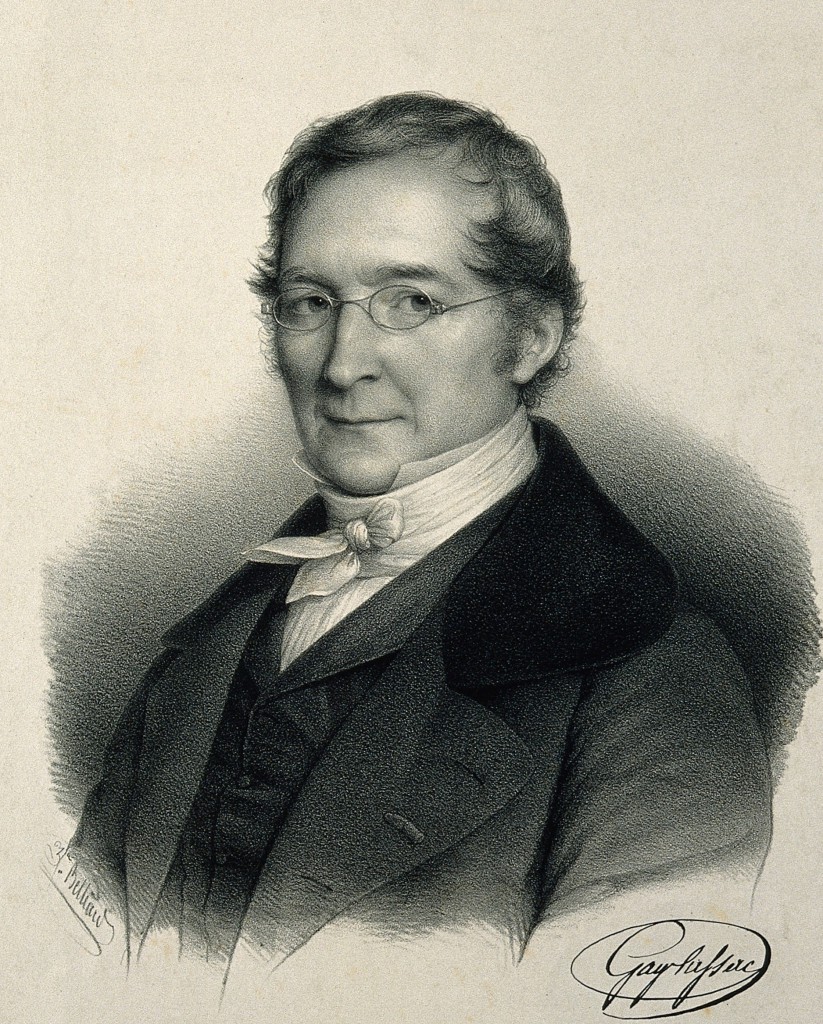 On December 6, 1778, French chemist and physicist Joseph Louis Gay-Lussac was born. He is known mostly for two laws related to gases, and for his work on alcohol-water mixtures, which led to the degrees Gay-Lussac used to measure alcoholic beverages in many countries.

“I have not chosen a career that will lead me to a great fortune, but not my principal ambition.
In fact, later in life he enjoyed comfortable income from his science discoveries.”
– Joseph Louis Gay-Lussac, Letter to his father, 1803.[14]

Gay-Lussac was born at Saint-Léonard-de-Noblat in the present-day department of Haute-Vienne, in west-central France. Joseph Gay-Lussac’s father was a judge and was actually called Antoine Gay, a small estate near her place of residence was called Lussac. Joseph Louis Gay-Lussac was the eldest child of the family of seven in a small village in the French province of Limousin. In November 1794 he went to Paris; due to famine many pupils were sent back home to their parents – Gay-Lussac was allowed to stay because of his good mathematical skills. Finally he was entering the École Polytechnique in 1798. When he entered the École Polytechnique his father had been arrested, as it is believed. Three years later, Gay-Lussac transferred to the École des Ponts et Chaussées, and shortly afterwards was assigned to C. L. Berthollet as his assistant. In 1802, he was appointed demonstrator to A. F. Fourcroy at the École Polytechnique, where he became professor of chemistry. At the time, scientists were interested in the direction of the magnetic needle and the composition of the air in higher air layers. Previously (1804), the Russian Academy of Sciences in St. Petersburg had already carried out its first investigations in a balloon. The Institut de France commissioned Gay-Lussac and Jean-Baptiste Biot to take measurements with a balloon.

On 24 August 1804, together with Biot, he undertook a daring flight in a hydrogen balloon and reached a height of 4,000 metres. On this occasion both examined the earth’s magnetic field. On 16 September he made a second balloon flight, this time alone. He took air samples at various altitudes and climbed up to 21,600 Parisian feet, which corresponds to 7,017 metres above the balloon location. The analysis of the samples together with Alexander von Humboldt showed that the oxygen content of the air does not change with altitude.[3] They were able to measure a temperature drop of 1 °C per 174 metres of altitude ascent, and Gay-Lussac and Alexander von Humboldt were able to refute John Dalton‘s idea that atomic heavier gases sink, lighter atomic gases rise, and that the composition in the higher atmosphere changes as a result.[4] Today we know that Dalton’s assumption would result, among other things, in the total carbon dioxide content of the Earth’s atmosphere accumulating pure on the Earth’s surface, suffocating oxygen consumers (e.g. all animals and humans). However, the chemical composition of the atmosphere does change slightly with altitude due to other physical influences, and the density of the gases does not matter. 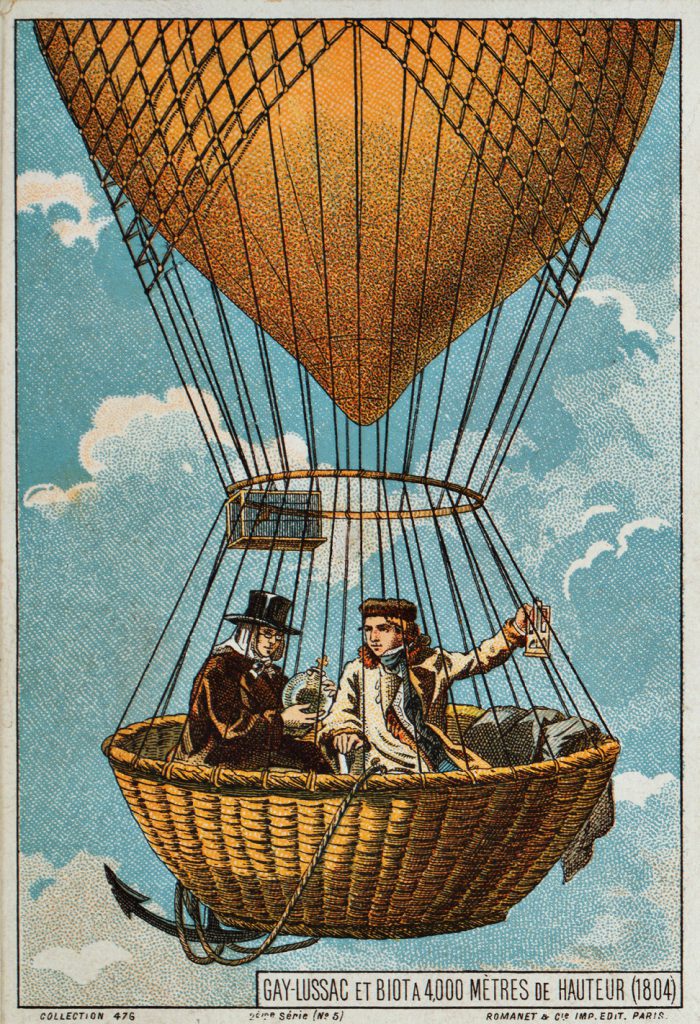 Gay-Lussac and Biot ascend in a hot air balloon, 1804. Illustration from the late 19th century.

“In the natural sciences, and particularly in chemistry, generalities must come after the detailed knowledge of each fact and not before it.”
– Joseph Louis Gay-Lussac [14]

Berthollet founded a private scientific society, the Société d’Arcueil. There Gay-Lussac became acquainted with Laplace and Alexander von Humboldt. With this he undertook a research trip (March 1805) to Rome and Naples (to Vesuvius), they spent the winter 1805/1806 in Berlin. Humboldt has repeatedly emphasized that Gay-Lussac exerted a lasting influence on his development as a scientist. In 1808 Gay-Lussac became professor of practical chemistry at the École polytechnique in Paris in 1808 and simultaneously professor of physics and chemistry at the Sorbonne, a post which he only resigned for the chair of chemistry at the Jardin des Plantes. In 1809, together with Louis Jacques Thénard, he was awarded the 3000 francs Galvanic Prize by the Institut de France’s mathematical-physical class, awarded by Napoleon Bonaparte. Gay-Lussac mastered Italian, English and German. He was a member of many official commissions (e.g. Comité consultatif des arts et des manufactures (1805), Conseil de perfectionnement des poudres et des salpêtres (1818)).

Gay-Lussac published the Annales de Chimie et de Physique together with François Arago from 1816. In 1818, the French Académie des sciences organised a competition in which he was a member of the jury led by Arago. The winner of the competition was Augustin-Jean Fresnel, Siméon Denis Poisson, who participated with a new type of work on wave optics that, among other things, provided the theoretical basis for explaining Poisson spots. In 1830 Gay-Lussac was elected a foreign member of the Göttingen Academy of Science and in 1832 he was elected to the American Academy of Arts and Sciences. In 1821, he was elected a foreign member of the Royal Swedish Academy of Sciences. In 1831 he was elected to represent Haute-Vienne in the chamber of deputies, and in 1839 he entered the chamber of peers.

In 1802 he formulated the law of Gay-Lussac, according to which gases expand linearly with increasing temperature if the pressure remains constant. The coefficient of volume increase, which Gay-Lussac measured for each degree of temperature increase, was 1/266 (in fact: 1/273). According to this law, A. Crawford determined the temperature at which the volume of a gas disappears and came close to the absolute zero of the temperature (-273 °C). Some well known scientists (Amontons, Lambert, Charles) had already prepared the Gay-Lussac law, but they had not yet determined the degree of expansion of the gas precisely enough. Jacques Alexandre César Charles had already observed a uniform expansion of gases (oxygen, nitrogen, hydrogen) in the range between 0 and 100 °C. The expansion of the gases was not sufficiently precise when the temperature increased. Together with Alexander von Humboldt, Gay-Lussac investigated the volumes of hydrogen and oxygen that combine to form water. They found that exactly two parts by volume of hydrogen gas combine with one part by volume of oxygen gas to form water. They also carried out experiments to determine the composition of the air.

Experiments with other gases led him to the realization that the space ratios of atomic gases to compounds are in a simple ratio (law of multiple volumes). A little later, Amedeo Avogadro developed his hypothesis according to this law,[5] which later became Avogadro’s law. The law of multiple volumes led Gay-Lussac to further conclusions. In 1815, Gay-Lussac developed a method for determining vapour densities. The vapour densities were used to determine molecular masses of organic and inorganic compounds. Only the determination of the volume and the weight of a gas produced during distillation are sufficient to determine the actual weight of an easily evaporable organic molecule by comparison with hydrogen gas. He used this method to determine the molecular weights of hydrocyanic acid, ethanol and diethyl ether.

In 1807, Gay-Lussac carried out temperature experiments with two rooms of equal size, connected by a pipe and separable from each other. He evacuated one room with an air pump and then let the gas flow in from the other room. He noticed an increase in temperature as the gas flowed in and a decrease in temperature as the gas flowed out. This experiment was carried out in 1845 by James Prescott Joule with better measuring methods,[6] his result went as Joules law into science and laid the foundation stone for the internal energy of thermodynamics.

Since 1808 Gay-Lussac and Louis Jacques Thénard tried to produce pure potassium and sodium from potassium hydroxide and sodium hydroxide, respectively, using a voltic pile. He suffered a serious eye injury. It took a year until his eyesight was halfway sufficient again. In 1809, Gay-Lussac and Louis Jacques Thénard found the amides of potassium and sodium. In 1810 they found the peroxides of potassium and sodium. Gay-Lussac studied the iodine discovered in 1811 by Bernard Courtois and showed that the chemical properties of iodine and chlorine are similar. He discovered hydroiodic acid and potassium iodide. He determined the oxidation states of sulphurous acid (1813) and of nitrogen ions. Together with Thénard, he discovered elementary boron and almost anhydrous hydrofluoric acid in 1808.

In an explosion with hydrocarbons, Gay-Lussac had suffered a severe handicap. He never overcame this accident. Gay-Lussac died in Paris on 9 May 1850. He was buried in the Père Lachaise cemetery.