You are here: Home › history › Joseph-Ignace Guillotin’s Opposition to the Death Penalty 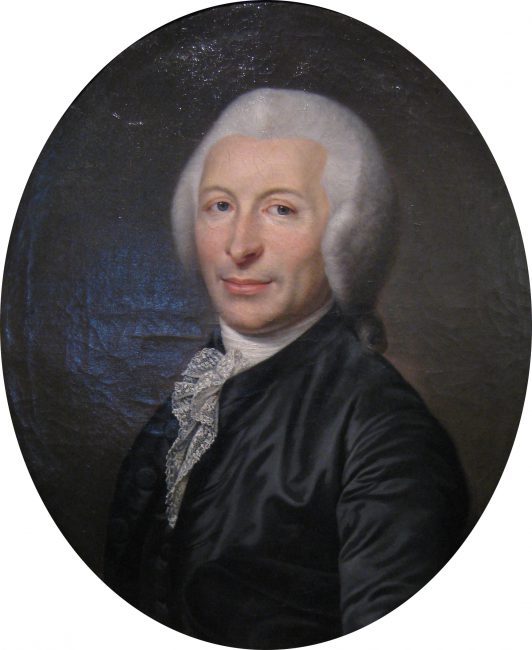 On May 28, 1738, French physician Joseph-Ignace Guillotin was born. Guillotin is best known for his proposition of the use of a device to carry out death penalties in France, as a less painful method of execution. While he did not invent the guillotine, and in fact opposed the death penalty, his name became an eponym for it. The actual inventor of the prototype was Antoine Louis.

“The guillotine is a machine that removes the head in no time and leaves the victim feeling nothing but a feeling of refreshing coolness.”
— Joseph-Ignace Guillotine, 1790

Joseph-Ignace Guillotin was born in Saintes, Charente-Maritime, France, as the ninth of 13 children of the lawyer Joseph-Alexandre Guillotin and his wife Catherine-Agathe Martin. After seven years of theological study with the Jesuits at the Jesuit College in Saintes, where he proved to be an excellent pupil, and as a novice in Bordeaux, he left the order to study medicine in Reims from 1763. He continued his studies at the Sorbonne in Paris in 1768, where he also obtained his doctorate in 1770. Between 1778 and 1783 he taught anatomy, physiology and pathology at the Faculty of Medicine of the University of Paris. In his free time he visited freemason lodges whose liberal ideas fascinated him and even became a founding member of the Grand Orient de France.

Around 1784, German physician Franz Anton Mesmer began to publicize his theory of ‘animal magnetism’.[4] It was considered offensive by many, and Louis XVI appointed a commission to investigate it. Joseph-Ignace Guillotin was appointed as a member of it along with Benjamin Franklin and others.[5] For one year he also worked as the personal physician of the Count of Provence, later King Louis XVIII and brother of Louis XVI.

He showed a keen interest in the political events of the day in France. In 1788, Guillotin drafted a pamphlet entitled Petition of the Citizens Living in Paris, concerning the proper constitution of the States-General. When Louis XVI closed their meeting place, the Hôtel des Menus Plaisirs, under an excuse, the participants gathered at the Jeu de Paume at Guillotin’s suggestion, where the famous Tennis Court Oath took place. He was then summoned by the French parliament to give an account of his opinions, which served to increase his popularity and on 2 May 1789 he became one of 10 Paris deputies in the Estates-General of 1789. He was secretary to the body from 1789 to 1791.

A Machine that Beheads Painless

As a member of the assembly, Guillotin mainly directed his attention towards medical reform. The issue of the death penalty was very topical at the time. Guillotine invoked the Declaration of Human and Civil Rights and demanded that delinquents should be punished equally for certain offences regardless of their status. It was on 10 October 1789, during a debate on capital punishment, that he proposed that “the criminal shall be decapitated; this will be done solely by means of a simple mechanism.” This mechanism was then defined as “a machine that beheads painlessly“. His proposal appeared in the Royalist periodical, Les Actes des Apôtres. Back then, beheading was done by axe or sword, which did not always cause immediate death. Further, nobles and the well-to-do were usually judged with the executioner’s sword, heretics were burned at the stake, state criminals were quartered, thieves were hanged and forgeries were cooked alive in a kettle.

Opposed to the Death Penalty

At first, little attention was paid to Guillotine’s proposal. Louis-Michel Le Peletier even made a major plea for the abolition of the death penalty in 1791 and was supported by Mirabeau, Brissot and Robespierre, among others. However, the demand for the death penalty to be suspended could not ultimately be enforced, and it was agreed that the perpetrators should be be beheaded. Despite his proposal, Guillotin was opposed to the death penalty and hoped that a more humane and less painful method of execution would be the first step toward a total abolition of the death penalty. He also hoped that fewer families and children would witness executions, and vowed to make them more private and individualized.

From the Halifax Hatchet and the Loisette to the Guillotine

The executioner of Paris, Charles Henri Sanson, urged an early solution to alleviate the suffering of those who executed. So they turned to Antoine Louis, professor of surgery and personal physician of the king, to design such a killing instrument à la Guillotine. He was familiar with the problems Sanson mentioned and set out immediately to find an appropriate solution. On 17 March 1792 Louis presented his design based on the Halifax hatchet. On March 20, 1792, a law was passed ordering the execution of the death penalty in France solely by means of such a machine. The machine was popularly called “Louison” or “Louisette” after the king’s personal physician. Only the royalist newspaper Actes des Apôtres succeeded in changing its name to “Guillotine”.

I cut off your head in the twinkling of an eye, and you never feel it!

In 1789, during a speech to the assembly about capital punishment, Guillotin remarked “Now, with my machine, I cut off your head in the twinkling of an eye, and you never feel it!” This statement became quite popular and people started making up songs about Guillotin and “his” machine. However, it is also believed that Guillotin deeply regreted that the machine was named after him.

In later years, Guillotin continued his medical research and, together with Pinel, became a passionate supporter of vaccinations against cowpox in 1799. Guillotine’s family asked after his death in 1814 to change the name of the execution machine. After the government refused, his family changed their family name. After the French Revolution, executions resumed in the city center. The guillotine remained the official method of execution in France until the death penalty was abolished in 1981.