You are here: Home › medical science › Franz Mesmer – From Animal Magnetism to Hypnosis 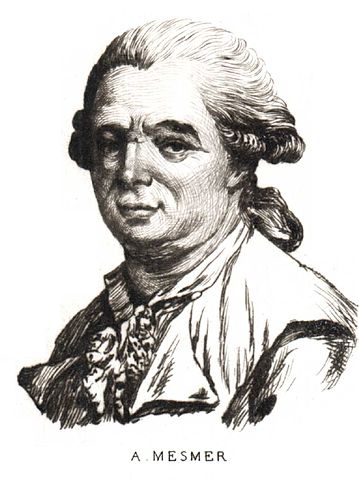 On May 23, 1734, German physician Franz Anton Mesmer was born. Mesmer theorised that there was a natural energetic transference that occurred between all animated and inanimate objects that he called animal magnetism, sometimes later referred to as mesmerism. This system of therapeutics was the forerunner of the modern practice of hypnotism. He spent his career offering this controversial therapy to wealthy aristocratic clients in several European capitals.

Franz Mesmer and the Idea of Animal Mechanism

Franz Mesmer was born in 1734 in Germany and studied theology at the University of Vienna, as well as philosophy and law. Later on, he became increasingly interested in the field of medicine and became a doctor in 1766 with his thesis ‘De influxu planetarum in corpus humanum‘ (The influence of the planets on the human body). In his thesis, Mesmer revived the probably ancient idea that the planets of our solar system extrude invisible rays that affect our bodies, an effect which he called ‘animal magnetism’.

When Treatment often was more Terrifying then Illness

Back then, it is believed that Mesmer’s theory did not arouse much controversy. He founded a practice in Vienna in his mid-30s and it is further assumed that Mesmer through the years of practice was increasingly dissatisfied with the conventional medical approaches at the time. He found that often the healing methods were more terrifying than the conditions doctors intended to treat and he favoured a more gentle approach. One day, Mesmer met the 27-year old Franzl Oesterline who helped Mesmer to increase his fame. The woman was apparently suffering from “the most troublesome symptoms of which was that the blood rushed to her head and there set up the most cruel toothaches and earaches, followed by delirium, rage, vomiting and swooning“. Mesmer described Oesterline’s symptoms as convulsive malady and it is assumed that she moved into Franz Mesmer’s house in order to receive a decent care. For a cure, Mesmer apparently used a magnet in order to disrupt the gravitational tides adversely affecting his patient. He was able to induce his patient the sensation of a fluid draining from her body and taking her illness with it. Afterwards, she was able to recover. However, Mesmer probably did not believe that fluid was actually draining from her body per se and from a modern day perspective, the results were probably achieved by hypnosis. Mesmer’s system rested on his belief that illness was caused by depleted levels of ‘animal magnetism’, and that these could be replenished by the healer transmitting some of his own abundant magnetic force across the ether to the patient. This was achieved with the magnet as well as complex hand gestures and touch which became known as the ‘mesmeric pass’

In Mozart‘s opera “Così fan tutte” (1790) based on a libretto by Lorenzo da Ponte, Mesmerism is satirically presented: Guglielmo and Ferrando fake a suicide by poison and are “healed” in a parody of Mesmer’s magnetization method by the hastily summoned doctor (in reality the disguised maid Despina). In many productions Despina uses the oversized dummy of a horseshoe magnet.

The Case of Maria-Theresia Paradis

Franz Mesmer became rather famous. He claimed to have healed haemorrhoids, menstrual difficulties and even blindness, and paralysis with his approach and went on tour giving demonstrations his his techniques in Europe. However, not everyone liked Mesmer’s shows and his unusual methods. He started to receive much criticism from the medical establishment and it is believed that especially one patient caused Mesmer to be called a fraud and charlatan, the blind pianist Maria-Theresa Paradis (1759-1824). Maria Theresia Paradis was blind from the age of three. She was a well-known pianist and composer in Vienna. She was good friends with Mesmer and frequented his palace on the Landstraße in Vienna. She hoped that his treatment would cure her. Mesmer describes the treatment of “Jungfer Paradis”, the improvement of complaints through Mesmer’s approach and the end of the healing process by Father Paradis in his view in “Abhandlung über die Entdeckung des thierischen Magnetismus” (Treatise on animal magnetism). The psychologically sensitive novel Alissa Walser‘s In the Beginning Was Night Music deals with the historical event of the medical treatment of Theresa von Paradis in the clinic of the Viennese doctor and magnetist Mesmer, its fragmented success and the subsequent international sensation.

From Mesmerism to Hypnosis

Later, a royal commission was appointed to investigate Franz Mesmer’s methods. The commission can to the conclusion that Mesmer must be a fraud as the patients could be cured from their illnesses if the magnet was applied or not. Even though his critics were right saying that there was no evidence of animal magnetism being transferred through the ether, the psychological effect of Mesmer’s method stayed unrecognized. In 1843 the Scottish physician James Braid proposed the term hypnosis for a technique derived from animal magnetism; today this is the usual meaning of mesmerism.[4] Mesmer’s legacy persisted, far into the 19th century and beyond, as arguments over his techniques shaped the development of hypnosis as we know it today.

Mesmer was driven into exile soon after the investigations on animal magnetism although his influential student, Armand-Marie-Jacques de Chastenet, Marquis de Puségur (1751-1825), continued to have many followers until his death. Mesmer continued to practice in Frauenfeld, Switzerland, for a number of years and died in 1815 in Meersburg, Germany.

At yovisto academic video search, you can learn more about Mind-Body Interactions in a lecture by David Spiegel at the Stanford School of Medicine.