You are here: Home › music › Niccoló Paganini – the Devil’s Violinist 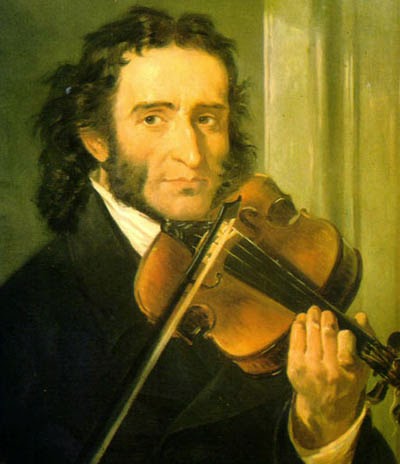 On May 27, 1840, Italian violinist and composer Niccolo Paganini passed away. He was the most celebrated violin virtuoso of his time, and left his mark as one of the pillars of modern violin technique.

“Some creatures are completely demonic, in some parts of it are effective. […] Among artists it is found more in musicians, less in painters. In Paganini it shows itself to a high degree, which is why he produces such great effects.”
– Johann Wolfgang von Goethe, to Johann Peter Eckermann about Niccoló Paganini, March 2, 1831

Niccolò Paganini was born in Genoa, then capital of the Republic of Genoa, the third of the six children of Antonio and Teresa (née Bocciardo) Paganini. Already Paganini’s father made his living from music. He used to play the mandolin and also taught his son Niccolò how to master the instrument. At the age of seven, the young boy moved to the violin and immediately turned out to be successful. He earned himself several scholarships and was taken to Parma by his father in order to being taught by the famous Alessandro Rolla, who sent him to his own teacher, Ferdinando Paer. At the age of 18, Paganini already worked as first violin of the Republic of Lucca and along with his incredible skills came his reputation as a womanizer and gambler.

In January 1805, Paganini was appointed concertmaster in the Orchestra of the Republic of Lucca and, after Princess Elisa Baciocchi, a sister of Napoleon, became ruler of Lucca, became its chamber virtuoso and opera director instead in September 1805. This only permanent position in Paganini’s life lasted until 1809. During this time, he wrote numerous works for violin and orchestra as well as for violin and guitar. His fame in the area was enormous, in contrast to the rest of Europe, where he was unfortunately only little known. However, things changed after a concert in Milan around 1813. Paganini became well known by further leading musicians and during his tour starting in Vienna in 1828, he became famous far beyond Italy’s borders. When Paganini finally left Italy for Vienna, he was already preceded by many rumors and the reputation of being an outstanding violin virtuoso who bewitched his listeners with his “magic violin skills”.

In Vienna, experts and the public celebrated him enthusiastically. His concerts were reviewed in all the newspapers, correspondent reports on his art also reached Germany and France, fashion magazines dealt with his alleged lifestyle, gastronomy and clothing fashions were infested à la Paganini, utensils bore his portrait, poems and farces with the theme of Paganini were published, composers chose melodies and names with allusions to Paganini for their works, and the Austrian Emperor Franz I awarded him the honorary title of “Imperial Chamber Virtuoso”.

In the following period however, Paganini faced serious problems concerning his health. He was reputed to have been affected by Marfan syndrome and additionally, the stress coming from the many concerts and his lifestyle took their toll. Even though he was officially cured quite fast, he had to cancel many concerts due to various health problems and it is also assumed that he suffered from a severe depression at some time. In 1827, Pope Leo XII honoured Paganini with the Order of the Golden Spur. His technical ability and his willingness to display it received much critical acclaim. In addition to his own compositions, theme and variations being the most popular, Paganini also performed modified versions of works (primarily concertos) written by his early contemporaries, such as Rodolphe Kreutzer and Giovanni Battista Viotti. Around 1834, he retired from his career as a concert musician. He now devoted most of his lifetime to composing and publishing further works as well as teaching. Among German audiences, however, Paganini’s black concert attire, his disease-ridden figure and physiognomy, as well as his musical abilities and effects, which were inexplicable to listeners, contributed to perpetuating the image of the devilish-demonic artist to this day. 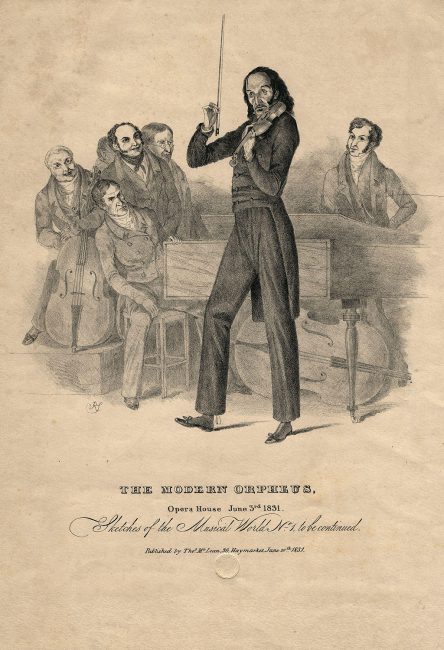 1831 bulletin advertising a performance of Paganini

In 1836, Paganini returned to Paris to set up a casino. Its immediate failure left him in financial ruin, and he auctioned off his personal effects, including his musical instruments, to recoup his losses. At Christmas of 1838, he left Paris for Marseilles and, after a brief stay, travelled to Nice where his condition worsened. In May 1840, the Bishop of Nice sent Paganini a local parish priest to perform the last rites. The assumptions about Paganini’s illnesses are mainly based on two expert opinions of his physician friend Francesco Bennati from the years 1831 and 1845. According to these, Paganini suffered from the consequences of a measles encephalitis from earlier years and from syphilitic-tuberculous complaints from middle years, which manifested themselves in laryngeal tuberculosis with aphonia and extensive bone necrosis of the lower jaw with loss of teeth, leading to his death with a fall of blood. Niccoló Paganini passed away on May 27, 1840 and he was buried in Parma several years later. Paganini’s estate contained 15 violins, including seven by Antonio Stradivari,[6] four by Giuseppe Guarneri (Guarneri del Gesù) and two by Nicola Amati, as well as two violas by Stradivari, four violoncellos, including two by Stradivari and one by Guarneri, and a guitar

Carl Guhr wrote a treatise in 1829 that systematically deals with the aesthetics of Niccoló Paganini’s violin playing and with his techniques. It shows that Paganini’s idiosyncrasies were based almost entirely on the traditional Italian violin playing of Tartini and Locatelli in particular. What distinguished him from them was the excessive use of the particularly difficult traditional techniques and the aura of personal and genius that they created on stage. Paganini’s major works were presumably created between 1805 and 1809 and they are known for being technically imaginative. The solo piece Duetto Amoroso became known as one of his most brilliant, depicting the sighs and groans of lovers on the violin. It is assumed that Paganini influenced many musicians, such as Franz Liszt,[4] Robert Schumann,[5] Andrew Lloyd Webber, and George Rochberg. In 2013, a movie titled “The Devil’s Violinist” was released starring David Garrett as Niccoló Paganini.