You are here: Home › astronomy › Johann Heinrich von Mädler and the First Accurate Map of the Moon

On May 29, 1794, German astronomer Johann Heinrich von Mädler was born. He is best known for producing one of the first exact map of the Moon, the Mappa Selenographica.

Mädler was born in Berlin, Germany, the son of a master tailor. At birth, however, he was so weak that it was feared that he could only survive for a few hours. Over the years his constitution improved. His intellectual talents were noticed early on. From 1806 he attended the Friedrichwerdersche Gymnasium in Berlin. In 1813 both parents died of typhoid within six weeks and the 19-year-old Johann Mädler had to take over the education of his three younger sisters, who were 14, 11 and 5 years old. He had always had the desire to study mathematics and astronomy. Due to the loss of his parents this was not possible for the time being. Mädler spent the next five years helping himself and his sisters by giving private lessons. He trained as a primary school teacher until 1817 at a teacher training seminar. After that he gave private lessons and gave lectures at the teacher’s seminar. At the same time he studied mathematics under Martin Ohm and astronomy under Johann Elert Bode [5] and Johann Franz Encke at the newly built University of Berlin from 1818.

In 1831 Mädler took up a teaching position at the royal teacher’s seminar in Berlin under Adolph Diesterweg. He was mainly concerned with mathematics, natural sciences and calligraphy. He published a textbook and didactic aids for the study of calligraphy. From 1822 he began with meteorological observations, which he also published. In 1833 he carried out exact time determinations at Cape Arkona, the northernmost point of the island of Rügen, on behalf of the Prussian government. These were needed for a Russian “chronometric expedition”.

In this period, Mädler also got to know the wealthy hobby astronomer Wilhelm Beer. Mädler taught the man in science and was able to use his private observatory, where he observed mostly the moon and later planet Mars together with Beer. Between 1830 and 1836 Mädler made drawings of the moon’s surface for 600 nights. A large lunar map with four leaves was created. The first sheet appeared in 1834, the lithographs had been made by his cousin, Lieutenant Vogel. The maps were published in two volumes together with a text work General Selenography in 1837. The costs for this were borne by Beer. In 1838 a smaller map of the moon with a diameter of 33 cm appeared. In the following years the maps became the standard work. In 1830, both observed Mars, made the first accurate maps of the planet and determined its rotation period. The determined value deviates only 13 seconds from the value determined with today’s means. Mädler and Beer also determined the zero meridian of Mars. Mädler became world famous and received numerous awards. He received a doctorate and was appointed Professor of Astronomy by Friedrich Wilhelm III in December 1837. 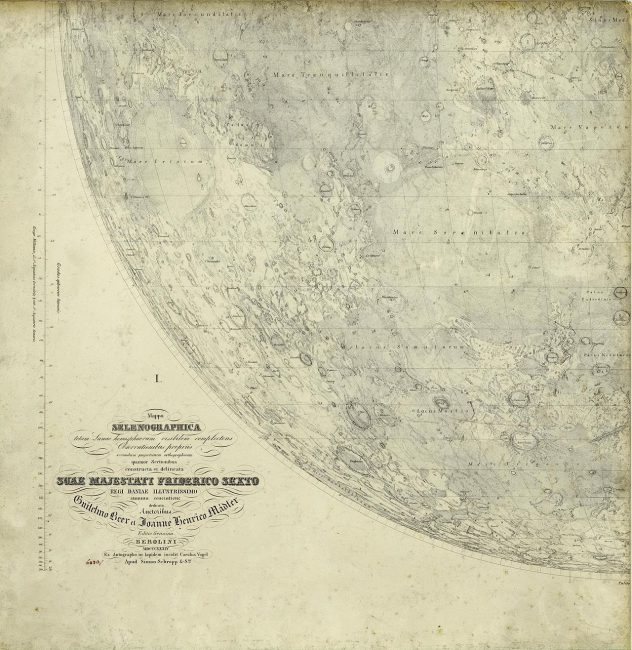 From 1836 Mädler worked as an observer at the newly built Berlin Observatory, whose director was his former professor Johann Franz Encke. Here he carried out observations with a telescope with an aperture of 24 cm. In 1840 he went to the Dorpat Observatory (now Tartu in Estonia) as successor of Friedrich Georg Wilhelm Struve, who had been appointed to the new Russian central observatory Pulkova. He had actually intended to create an even larger lunar map. However, this failed due to the relatively small number of clear nights and he limited himself to detailed drawings. However, Mädler also found some time to perform observations on double stars and fixed stars. During his time in Dorpat, Mädler undertook two expeditions on behalf of the Russian government to observe total solar eclipses. The first, in 1860 in Brest-Litowsk (Poland), could not be observed due to bad weather. The second, in 1861 in Vitoria (Spain), was successful. During his life as a scientist, Mädler also worked as a scientific journalist and wrote about the young pioneer photographic pioneer Henry Fox Talbot. [4] It is assumed that Mädler coined the term ‘photographie‘ in 1839. 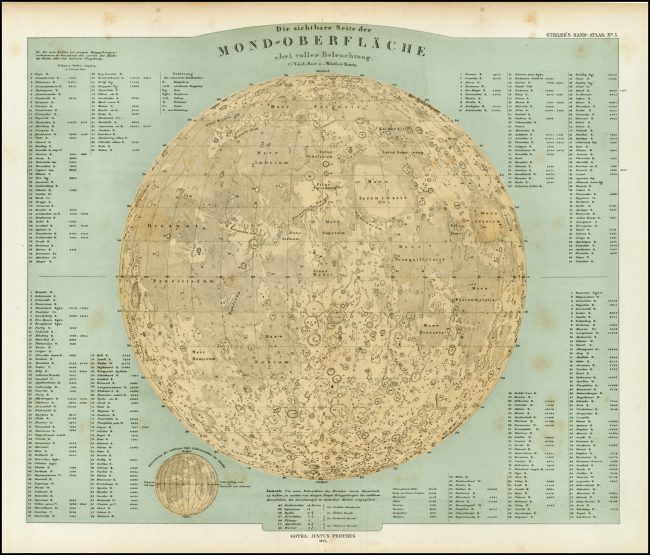 In 1864, he proposed a calendar reform for Russia: After dropping 12 days to align with Gregorian calendar dates before the year 1900, the leap year in 1900 along with every 128th year afterwards (2028, 2156, etc.) under the Julian rules would be cancelled. This would give a mean year of 365 days, 5 hours, 48 minutes, 45 seconds, which is extremely close to the mean tropical year. Neither the Tsar nor Orthodox clergy accepted this unsolicited proposal, though a modified version of it was made by Sergey Glazenap in 1900, and ultimately Russia would adopt the Gregorian calendar in 1918. 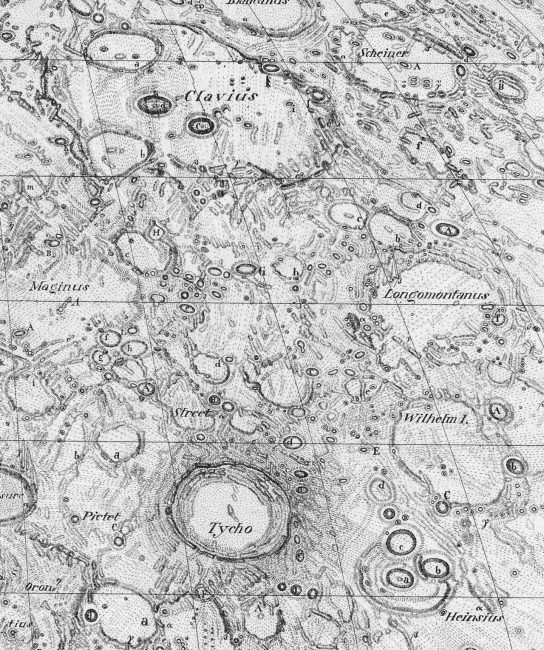 A detail of Beer and Mädler quadrant III, showing Clavius and Tycho.

He was a member of the Gesellschaft Deutscher Naturforscher und Ärzte. From 1845 he was a corresponding member of the Bavarian Academy of Sciences . In 1860 he was elected a member of the Leopoldina. In 1865 Mädler retired, was raised to the Russian nobility and returned to Germany. Increasing eye problems had made own observations impossible. In Wiesbaden he underwent a successful eye operation. From then on he dedicated himself to his work Geschichte der Himmelskunde (History of Celestial Science), which was published in 1873. From Wiesbaden he moved to Bonn, where he lived for three years. During this time he travelled to England, where he visited the Royal Greenwich Observatory. At the request of his wife’s family, the couple moved to Hannover. Here Mädler died on March 14, 1874, at the age of 79 after six months of illness. Notwithstanding several singular scientific errors, von Mädler, without doubt, was one of the great and eminent astronomers of the 19th century