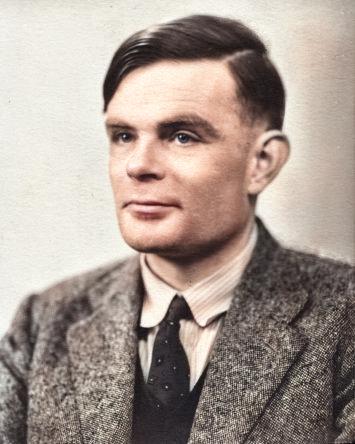 On June 23, 1912, English computer scientist, mathematician, logician, and cryptanalyst,Alan Mathison Turing was born. Outside the world of computer science or mathematics the name of probably the most influential figure and in some sense the father of all computing technology Alan Turing is hardly known. But it was him, who laid the foundations of the theory of computing. Already in the 1930s, when no digital electronic computer had ever been built, he has shown the limits of computation and thus, anticipated all that was to come in the so-called digital revolution. He also laid the foundations to artificial intelligence. And even more, he was a hero of World War II. Without him, maybe it would have been impossible to decode Nazi Germany’s encrypted radio messages. This makes him to one of the most distinguished figures of the war and we have to thank him for the victory of the Allied forces. And how was he thanked by his contemporaries… [1]

“A man provided with paper, pencil, and rubber, and subject to strict discipline, is in effect a universal machine.”
–“Intelligent Machinery: A Report by A. M. Turing,” (Summer 1948)

Alan Turing’s father was member of the Indian Civil Service, who returned to England to raise his son in his home country. Young Alan learned the ABC by himself and with the age of 16 he was already reading the writings of Albert Einstein.[2] Not only did he grasp Einstein’s writings, but it is possible that he managed to deduce Einstein’s questioning of Newton’s laws of motion from a text in which this was never made explicit. He studied mathematics at King’s College in Cambridge, where his fellow students considered him to be eccentric. His talking often was stammering with brusquely silence. However, he was awarded first-class honours in mathematics and in 1935, at the age of 22, he was elected a fellow of King’s college on the strength of a dissertation in which he proved the central limit theorem.

Most of all, he loved sports. In 1937 he published his famous paper ‘”On Computable Numbers, with an Application to the Entscheidungsproblem“‘, in which he introduced the ‘Turing Machine‘, a simple model of a computer that is able to solve all kind of problems that might be expressed as an algorithm. The Entscheidungsproblem (decision problem) was originally posed by German mathematician David Hilbert in 1928.[3] Turing proved that his “universal computing machine” would be capable of performing any conceivable mathematical computation if it were representable as an algorithm. He went on to prove that there was no solution to the decision problem by first showing that the halting problem for Turing machines is undecidable: It is not possible to decide algorithmically whether a Turing machine will ever halt. With his machine he laid the foundation for theoretical computer science and was able to demonstrate even the limits of computation at a time, when no computer existed at all.

In summer 1938 he studied cryptology to become the leader of a small group of mathematicians at Bletchley Park, an extensive cryptoanalytic facility that had the task to decipher the codes of the German navy. The Germans were using the famous Enigma for encrypting their messages. Turing had something of a reputation for eccentricity at Bletchley Park. He was known to his colleagues as ‘Prof’ and sometimes came to work with his pyjamas under his jacket or he was wearing a service gas mask at the pollen season in springtime for cycling. But it was his cryptoanalytic effort that made the decryption of the German radio messages possible and thus it also was him to be responsible for the allied victory of the war. Within weeks of arriving at Bletchley Park, Turing had specified an electromechanical machine that could help break Enigma more effectively than the Polish bomba kryptologiczna, from which its name was derived. The bombe, with an enhancement suggested by mathematician Gordon Welchman, became one of the primary tools, and the major automated one, used to attack Enigma-enciphered messages. While working at Bletchley, Turing, who was a talented long-distance runner, occasionally ran the 40 miles (64 km) to London when he was needed for high-level meetings, and he was capable of world-class marathon standards.

Immediately after the war Churchill closed down Bletchley Park. In recognition of Turing’s service he was promoted Officer of the Order of the British Empire. Actually, he stored the medal in his toolbox, considering it to be merely a piece of metal. In 1950 Turing addressed the problem of artificial intelligence, and proposed an experiment which became known as the Turing Test, an attempt to define a standard for a machine to be called “intelligent“. The idea was that a computer could be said to “think” if a human interrogator could not tell it apart, through conversation, from a human being.

“Can machines think?”… The new form of the problem can be described in terms of a game which we call the ‘imitation game.”
— Alan Turing, Computing Machinery and Intelligence (1950)

But in 1952 the tragedy started. During the investigation of a burglary in Turing’s home, he acknowledged a sexual relationship with an accomplice of the suspected burglar. Homosexual acts were illegal in the UK at that time, and so Turing was charged with gross indecency under Section 11 of the Criminal Law Amendment Act 1885. The judge offered him the choice between imprisonment or probation conditional on his agreement to undergo hormonal treatment designed to reduce libido. He accepted chemical castration via injections of stilboestrol, a synthetic oestrogen hormone.

On June 8th, 1954 Turing was found dead at his house in Wilmslow near Manchester. Next to him on his bedside table laid a half eaten apple with the soft scent of bitter almond. It is generaly believed that Turing had committed suicide with cyanide (actually BBC is reporting about doubts concerning the results of the former investigation [1]). In the times while working at Bletchley Park, he was sometimes reciting whimsical verses such as the one from the Disney movie “Snow White and the Seven Dwarves”:

“Dip the apple in the brew, let the sleeping death seep through”

In August 2009, John Graham-Cumming started a petition urging the British government to apologise for Turing’s prosecution as a homosexual. The petition received more than 30,000 signatures. The Prime Minister, Gordon Brown, acknowledged the petition, releasing a statement on 10 September 2009 apologising and describing the treatment of Turing as “appalling”. Since 1966, the Turing Award has been given annually by the Association for Computing Machinery for technical or theoretical contributions to the computing community. It is widely considered to be the computing world’s highest honour, equivalent to the Nobel Prize.