You are here: Home › philosophy › Herman Kahn and the Consequences of Nuclear War 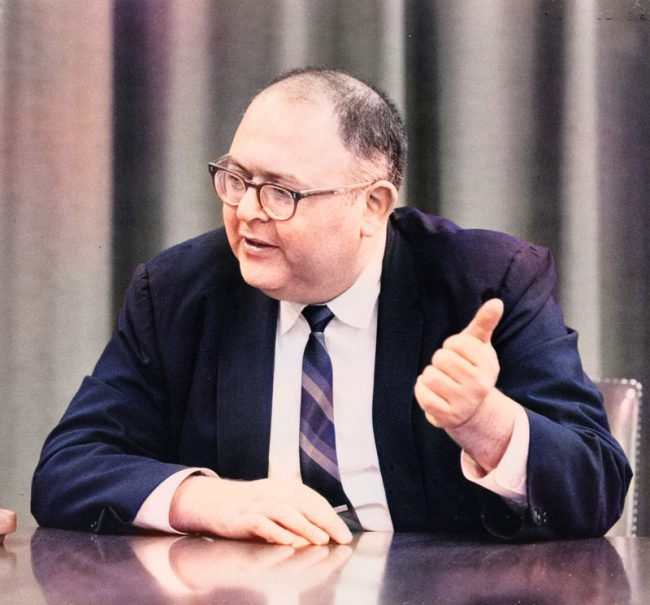 On February 15, 1922, American physicist, futurist and system theorist Herman Kahn was born. He became known for analyzing the likely consequences of nuclear war and recommending ways to improve survivability, making him one of three historical inspirations for the title character of Stanley Kubrick‘s classic black comedy film satire Dr. Strangelove.[5]

Herman Kahn was born in Bayonne, New Jersey and was raised in the Bronx, later Los Angeles. Kahn attended the University of California, majoring in physics. He was stationed by the Army as a telephone linesman in Burma during the second World War and later completed his BS degree at UCLA and embarked on a doctorate at Caltech. Kahn joined the the RAND Corporation via his friend Samuel Cohen, the inventor of the neutron bomb. Herman Kahn joined the RAND Corporation, a nonprofit global policy think tank originally formed by Douglas Aircraft Company to offer research and analysis to the United States Armed Forces. Soon, Kahn became involved with the development of the hydrogen bomb and started to work closely together with Edward Teller [5], John von Neumann [6], Hans Bethe [7], and Albert Wohlstetter.

Nuclear Warfare in the Cold Ware

To Herman Kahn’s major contributions belonged mostly the strategies he developed during the Cold War on the nuclear warfare. In the 1950s, there was a theory that the Army of the Soviet Union was considerably larger than that of the United States. This was considered a potential security threat for the United States and thus, they proclaimed that the U.S’ response to any Soviet aggression anywhere would be a nuclear attack.

However, Herman Kahn believed this theory to be crude and potentially destabilizing. He argued that New-Look theory invited nuclear attack by providing the Soviet Union with an incentive to precede any conventional localized military action somewhere in the world with a nuclear attack on U.S. bomber bases, thereby eliminating the Americans’ nuclear threat immediately and forcing the United States into the land war it sought to avoid. The Cold War tensions reached their peak right after the Sputnik crisis and a talk of a widening “missile gap” between the United States and the Soviet Union. Herman Kahn published his work On Thermonuclear War. He developed the theory that nuclear war was obviously feasible, since the United States and the Soviet Union currently had massive nuclear arsenals aimed at each other. Further, the author explained that nuclear war was indeed winnable like any other war.

Thinking about the Unimaginable

Kahn argued that even though millions of people died and a few large cities where destroyed, life would go on. He further disputed that the survivors would not “envy the dead”. Kahn based his work on systems theory and game theory and he came up with the idea that for deterrence to succeed, the Soviet Union had to be convinced that the United States had second-strike capability in order to leave the Politburo in no doubt that even a perfectly coordinated massive attack would guarantee a measure of retaliation that would leave them devastated as well.

Articulating the Most Brutal Possibilities

During his career, Kahn was disliked by some due to his willingness to articulate the most brutal possibilities during a war. Further, he became known as one of few strategists who was willing to posit the form a post-nuclear world might assume. For instance, fallout would be another one of life’s many unpleasantnesses and inconveniences. He also believed that the rise in birth defects would not doom mankind to extinction because a majority of survivors would remain unaffected by them. Kahn theorized that the contaminated food would be given to the elderly, who would presumably die before the delayed onset of cancers caused by radioactivity and the fallout shelters and civil defense drills would give the population both the incentive and the encouragement to rebuild.

“The Doomsday Machine is not sufficiently controllable. Even though it maximizes the probability that deterrence will work (including minimizing the probability of accidents or miscalculations), it is totally unsatisfactory. One must still examine the consequences of a failure. In this case a failure kills too many people and kills them too automatically. There is no chance of human intervention, control, and final decision.And even if we give up the computer and make the Doomsday Machine reliably controllable by the decision makers, it is still not controllable enough. Neither NATO nor the United States, and possibly not even the Soviet Union, would be willing to spend billions of dollars to give a few individuals this particular kind of life and death power over the entire world.”
– Hermann Kahn, On Thermonuclear War (1960)

After the détente between the superpowers in the early 1970s, Kahn continued to engage in futurology, criticizing its assumptions of a negative development. Kahn and the Hudson Institute were relatively right-wing in politics and tried to refute popular apocalyptic essays such as Paul R. Ehrlich‘s The Population Bomb, The Limits to Growth of the Club of Rome, or Garrett Hardin‘s The Tragedy of the Commons. In Kahn’s view, capitalism and technology offer unlimited possibilities for progress; he assumed that the colonization of space was imminent. At the end of the decade, Kahn continued to move politically to the right. He wrote approvingly about the policies of Ronald Reagan and mocked Jonathan Schell, who had claimed that the long-term consequences of nuclear war would destroy humanity. Kahn’s book The Next 200 Years presented an optimistic picture of the economic situation in 2176. He also wrote several books on systems theory and on the future of the American, Japanese and Australian economies.

Dr. Strangelove and the Doomsday Machine

Kahn was allegedly one of the models for Dr. Strangelove in the film of the same name by director Stanley Kubrick (1964),[8] together with Edward Teller, Henry Kissinger and Wernher von Braun. Kubrick had read Kahn’s works in detail and insisted that the producer of the film should also read them. Kubrick got to know Kahn personally, and Kahn gave Kubrick the idea for the “doomsday machine”, an invention that would immediately destroy the entire planet as a result of a nuclear attack. In the film the US president mentions a report on the doomsday machine written by the “BLAND Corporation”. In fact, the Doomsday Machine was the epitome of that destabilizing tactic that Kahn himself wanted to avoid because its sole purpose was not military, but merely a threat or a bluff. On July 7 1983, Hermann Kahn died of a stroke, aged 61.