You are here: Home › physics › John Ray Dunning and the Manhattan Project 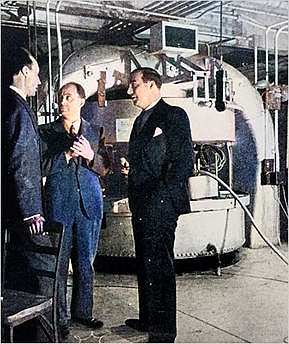 John Ray Dunning (1907-1975) – Photograph of he cyclotron built by Dunning in 1939, in the Pupin Hall physics building basement at Columbia University. Dunning (left) is with Enrico Fermi (center) and Dana P. Mitchell (right)

On September 24, 1907, US-American physicist John Ray Dunning was born. Dunning played key roles in the Manhattan Project that developed the first atomic bombs. He specialized in neutron physics, and did pioneering work in gaseous diffusion for isotope separation.

John Ray Dunning was born in Shelby, Nebraska, USA, the son of Albert Chester Dunning, a grain dealer, and his wife Josephine. He graduated from Shelby High School in 1925 and entered Nebraska Wesleyan University, where he received a Bachelor of Arts (B.A.) degree with highes honors in 1929. After graduation, Dunning commenced a doctoral program at Columbia University. In 1932, James Chadwick discovered the neutron, which influenced Dunning’s career, as he thereafter devoted much of his professional interest to the characteristics and uses of this particle [5]. Dunning’s research was enthusiastically supported at Columbia by George B. Pegram.

In 1933, Dunning was an instructor at Columbia University from 1929 to 1932, and a university fellow from 1932 to 1933. He received his Ph.D. in 1934 with a thesis on “The Emission and Scattering of Neutrons” under Pegram’s supervision [4]. Dunning continued teaching and research at Columbia University, becoming an assistant professor in 1935, and an associate professor there in 1938. He was a central figure at Columbia on neutron research, and went on to publish 24 papers on neutrons between 1934 and 1938. In 1936, Dunning received a Traveling Fellowship, which he used to meet and discuss his neutron physics research with many eminent European nuclear physicists including Niels Bohr, James Chadwick, Enrico Fermi, Werner Heisenberg, and Ernest Rutherford, before he returned to Columbia University to direct the construction of Columbia’s first cyclotron.[2]

In December 1938, the German chemists Otto Hahn and Fritz Strassmann published that they had detected the element barium after bombarding uranium with neutrons. Lise Meitner with her nephew Otto Frisch correctly interpreted these results as being the result of nuclear fission [3]. Frisch then confirmed this experimentally on January 13, 1939. Even before it was published, Meitner’s and Frisch’s interpretation of the work of Hahn and Strassmann crossed the Atlantic Ocean with Niels Bohr,[6] who was to lecture at Princeton University. Isidor Isaac Rabi [7] and Willis Lamb, two Columbia University physicists working at Princeton, heard the news and carried it back to Columbia. It was soon clear to a number of scientists at Columbia that they should try to detect the energy released in the nuclear fission of uranium from neutron bombardment. On 25 January 1939, Dunning was a member of the Columbia team that conducted the first nuclear fission experiment in the United States. These results of the Columbia group plus some additional observations on the nature of the fission process were promptly reported in a classic paper in the March 1, 1939, issue of the Physical Review, “The Fission of Uranium,” by H. L. Anderson, E. T. Booth, J. R. Dunning, E. Fermi, G. N. Glasoe, and F. G. Slack.[1]

Bohr argued that it was the uranium-235 isotope that was responsible for fission. With Alfred Nier and other colleagues, Dunning then showed in 1940 that it was mostly the uranium-235 isotope that was involved in the fission of the uranium nucleus. Dunning went on to direct the research team at Columbia that developed the gaseous-diffusion method of separating uranium-235 from the more abundant uranium-238 isotope.[2] The researchers at Columbia became the Manhattan Project’s Substitute Alloy Materials (SAM) Laboratories. Dunning headed the laboratory division responsible for all aspects of the gaseous diffusion program, including engineering problems, pilot plants and research activities. Gaseous diffusion is a technology used to produce enriched uranium by forcing gaseous uranium hexafluoride through semipermeable membranes. This produces a slight separation between the molecules containing uranium-235 and uranium-238. By use of a large cascade of many stages, high separations can be achieved. Gaseous diffusion is still the principal method for obtaining uranium-235 [2].

In 1946, Dunning became Thayer Lindsley Professor of Applied Science at Columbia. In the immediate post-war years he was Scientific Director for Construction of the Nevis Laboratories, a collaborative effort of Columbia University, the United States Atomic Energy Commission, and the Office of Naval Research. During the 1950s, Dunning was often consulted on nuclear technology matters by President Dwight D. Eisenhower and Rear Admiral Hyman G. Rickover, the head of the Navy’s nuclear powered ships project. Dunning was elected to the United States National Academy of Sciences in 1948.

In 1971, the pioneering work of Dunning and his colleagues on the gaseous diffusion method for U235 separation was recognized by an award of $30,000 each, in lieu of patent royalties, by the Atomic Energy Commission. The work had been recognized as patentable by the U.S. Patent Office, but a patent could not be issued because of the secrecy restrictions.[1] Dunning died from a heart attack at his home in Key Biscayne, Florida, on August 25, 1975, at age 67.

The Moment in Time: The Manhattan Project, [9]