You are here: Home › mathematics › Eratosthenes and the Circumference of the Earth 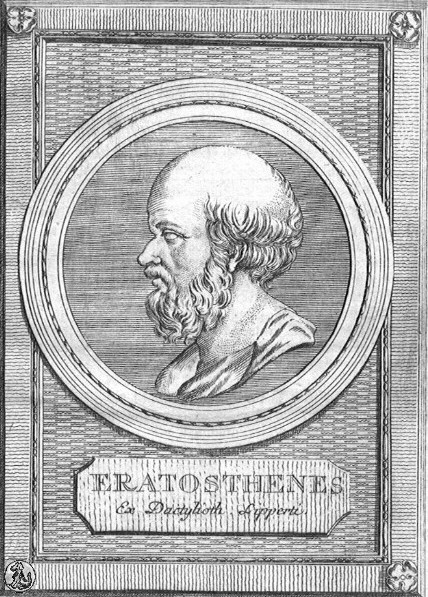 Eratosthenes of Cyrene was a Greek mathematician, geographer, poet, astronomer, and music theorist. He was a man of learning, becoming the chief librarian at the Library of Alexandria. He invented the discipline of geography, including the terminology used today. He is best known for being the first person to calculate the circumference of the Earth.

“Eratosthenes of Cyrene, employing mathematical theories and geometrical methods, discovered from the course of the sun the shadows cast by an equinoctial gnomon, and the inclination of the heaven that the circumference of the earth is two hundred and fifty-two thousand stadia, that is, thirty-one million five hundred thousand paces.”
– Vitruvius, De Architectura, Book 1, Chap 6, Sec. 9

The son of Aglaos, Eratosthenes was born in 276 BC in Cyrene. Now part of modern-day Libya, Cyrene under Ptolemaic rule in the fourth and third century BC had become a place of cultivation, where knowledge blossomed. Like any young Greek, Eratosthenes would have studied in the local gymnasium, where he would have learned physical skills and social discourse as well as reading, writing, arithmetic, poetry, and music. His teachers included the scholar Lysanias of Cyrene and the philosopher Ariston of Chios who had studied under Zeno, the founder of the Stoic school of philosophy. Eratosthenes also studied under the poet and scholar Callimachus who had also been born in Cyrene. Eratosthenes then spent some years studying in Athens.[1]

His interest in Plato led him to write his very first work at a scholarly level, Platonikos, inquiring into the mathematical foundation of Plato’s philosophies. Eratosthenes was a man of many perspectives and investigated the art of poetry under Callimachus. He was a talented and imaginative poet. As a historian, Eratosthenes decided to work on giving a systematic chronography of the known world by figuring out the dates of literary and political events from the siege of Troy up until his time. This work was highly esteemed for its accuracy. George Syncellus was later able to preserve from Chronographies a list of 38 kings of the Egyptian Thebes. Eratosthenes also wrote Olympic Victors, a chronology of the winners of the Olympic Games.

The Library of Alexandria

The library at Alexandria was planned by Ptolemy I Soter (c. 367 BC – 283/2 BC) and the project came to fruition under his son Ptolemy II Philadelphus (309–246 BC). Ptolemy II Philadelphus appointed one of Eratosthenes’ teachers Callimachus as the second librarian. When Ptolemy III Euergetes succeeded his father in 245 BC and he persuaded Eratosthenes to go to Alexandria as the tutor of his son Philopator. On the death of Callimachus in about 240 BC, Eratosthenes became the third librarian at Alexandria, in the library in a temple of the Muses called the Mouseion.

Eratosthenes made several important contributions to mathematics and science, and was a friend of Archimedes.[5] Around 255 BC, he invented the armillary sphere. An Armillary Sphere is a model of objects in the sky (in the celestial sphere), consisting of a spherical framework of rings, centered on Earth or the Sun, that represent lines of celestial longitude and latitude and other astronomically important features such as the ecliptic. In On the Circular Motions of the Celestial Bodies, Cleomedes credited him with having calculated the Earth’s circumference around 240 BC, using knowledge of the angle of elevation of the Sun at noon on the summer solstice in Alexandria and on Elephantine Island near Syene (modern Aswan, Egypt).

Eratosthenes calculated the circumference of the Earth without leaving Egypt. He knew that at local noon on the summer solstice in Syene (modern Aswan, Egypt), the Sun was directly overhead. He knew this because the shadow of someone looking down a deep well at that time in Syene blocked the reflection of the Sun on the water. He measured the Sun’s angle of elevation at noon on the same day in Alexandria. The method of measurement was to make a scale drawing of that triangle which included a right angle between a vertical rod and its shadow. This turned out to be 1/50th of a circle. Taking the Earth as spherical, and knowing both the distance and direction of Syene, he concluded that the Earth’s circumference was fifty times that distance. His knowledge of the size of Egypt was founded on the work of many generations of surveying trips. Pharaonic bookkeepers gave a distance between Syene and Alexandria of 5,000 stadia (a figure that was checked yearly). Some claim Eratosthenes used the Olympic stade of 176.4 m, which would imply a circumference of 44,100 km, an error of 10%. 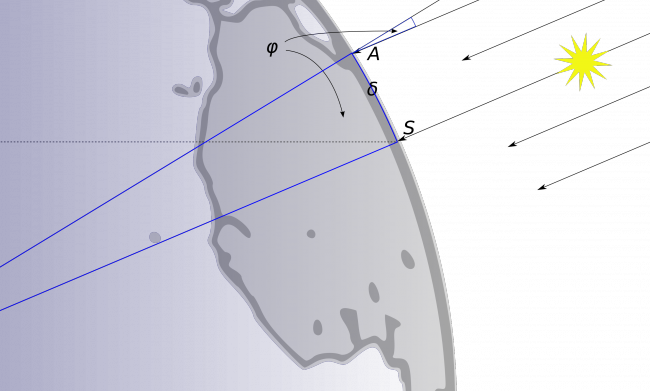 Eratosthenes also worked on prime numbers. He is remembered for his prime number sieve, the ‘Sieve of Eratosthenes‘ which, in modified form, is still an important tool in number theory research. The sieve appears in the Introduction to arithmetic by Nicomedes.[1] While Eratosthenes original work about his surprisingly accurate measurement is lost, some details of these calculations appear in works by other authors such as Cleomedes, Theon of Smyrna and Strabo. worked out a calendar that included leap years, and he laid the foundations of a systematic chronography of the world when he tried to give the dates of literary and political events from the time of the siege of Troy. He is also said to have compiled a star catalogue containing 675 stars.[1]

Eratosthenes also came up with a technique for charting the Earth’s surface. He separated the world known to him into a Northern and Southern division using an east–west line parallel to the equator running through the island of Rhodes and bisecting the Mediterranean. He added a second north–south line at right angles running through Alexandria. Eratosthenes drew additional east–west and north–south lines to his map, but instead of adding these lines in regular intervals, he drew them through famous places: Meroë (the capital of the ancient Ethiopian kings), the Pillars of Hercules, Sicily, the Euphrates River, the mouth of the Indus River and the tip of the Indian peninsula.[4]

Eratosthenes was afflicted by blindness in his old age, and he is said to have committed suicide by voluntary starvation.[2] Eratosthenes was the first antique scholar to call himself a “philologist”. By philology, he meant not only the study of linguistics and literature, but in a more general sense a multifaceted scholarship. Characteristic of his unbiased attitude toward deeply-rooted convictions is his criticism of poets, which did not spare even the highest authority like Homer. He did not approve of the truthfulness of the poets’ descriptions, since their goal was only entertainment and not instruction. Despite his fame and his extraordinary erudition, Eratosthenes did not become the founder of a school of his own. Of the four people named as his students in Suda, three cannot be identified with certainty and were therefore hardly important scientists. The fourth is the prominent grammarian Aristophanes of Byzantium, who succeeded Eratosthenes as head of the Library of Alexandria.