You are here: Home › physics › Isidor Isaac Rabi and the Nuclear Magnetic Resonance 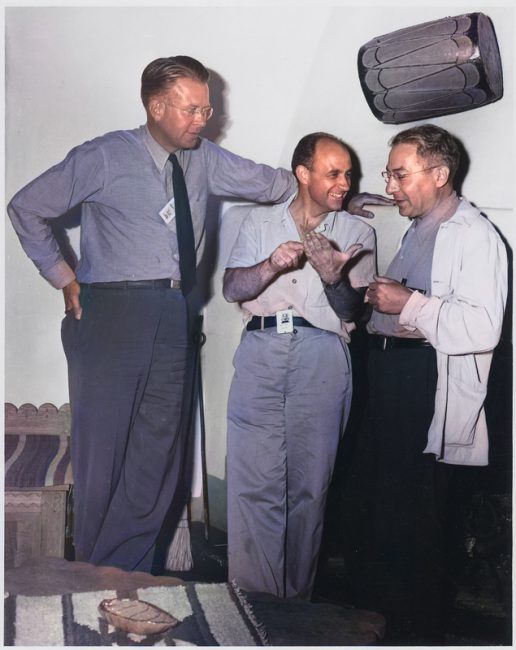 “My mother made me a scientist without ever intending to. Every other Jewish mother in Brooklyn would ask her child after school: So? Did you learn anything today? But not my mother. “Izzy,” she would say, “did you ask a good question today?” That difference — asking good questions — made me become a scientist.”
– Isidor Isaac Rabi, as quoted in [11]

Isidor Isaac Rabi was born in Rymanów, Austria-Hungary (today Poland). He came to the USA at the age of four, studied chemistry at Cornell University, receiving a bachelor degree in 1919, and attended Cornell University for graduate school before transferring to Columbia University, Ithaca (N.Y.).  In 1927 he obtained his PhD in physics from Columbia University with topics on the magnetic properties of crystals. For two years he then traveled across Europe as Barnard Fellow at Eidgenössische Technische Hochschule, Zurich and University of Hamburg, University of Munich, University of Copenhagen, and University of Leipzig. working with Sommerfeld, Bohr, Pauli, Stern, and Heisenberg. Rabi became lecturer in Theoretical Physics at Columbia University., where he became professor of physics in 1937. Even though he was recommended for the position by Heisenberg, Rabi was not remembered as an enthusiastic teacher and his students remembered him as “the worst teachers I ever had” (Irving Kaplan) or “simply an awful lecturer” (William Nierenberg). However, Rabi’s reputation as a scientist was great and he had already much influence and convinced many of his students to pursue a career in physics. From 1930 onwards, he undertook studies on the binding behaviour of protons in the atomic nucleus, from which he derived the molecular beam magnetic resonance detection method (precursor of NMR spectroscopy), which led him to his later Nobel Prize work.

In 1940, he moved to the Massachusetts Institute of Technology and participated in the development of radar and the atomic bomb in the Los Alamos laboratories. After the war he returned to Columbia University, while working at Brookhaven National Laboratory. He was also one of the organizers of the founding of CERN. He was scientific advisor to the American President Harry S. Truman. In 1964 he received the title of university professor at Columbia University. In 1967 he was retired, but continued to give lectures.

Considering his research, Rabi returned to particle beam experiments and developed the Breit-Rabi equation. Rabi also made the prediction that the Stern–Gerlach experiment could be modified to confirm the properties of the atomic nucleus. Among with Victor W. Cohen, Rabi built a molecular beam apparatus at Columbia to employ a weak magnetic field with which they hoped to detect the nuclear spin of sodium. It was previously predicted that if the nuclear spin were I, the magnetic field would split the beam into (2I + 1) beamlets. The experiment revealed four beamlets indicating that the nuclear spin of sodium was 3⁄2.

As Rabi’s research became more and more famous, several researchers helped to create the Molecular Beam Laboratory. There, many started their careers as physicists, however, only male physicists. Rabi himself never had a woman as a doctoral or postdoctoral student and it is believed that in his opinion, women could not be physicists. In 1937, the scientists Rabi, Kusch, Millman and Zacharias used an oscillating field to measure the magnetic moment of several lithium isotopes with molecular beams, including LiCl, LiF and dilithium. In the end, the team discovered that the shape of the deuteron was not symmetric. This information provided valuable insights into the nature of the nuclear force binding nucleons. For the creation of the molecular-beam magnetic-resonance detection method, Rabi was awarded the Nobel Prize for Physics in 1944.

During his academic career, Isidor Isaac Rabi published his most important papers in The Physical Review, of which he was an Associate Editor for two periods. He received the Prize of the American Association for the Advancement of Science and, the Elliott Cresson Medal of the Franklin Institute. He was awarded the Medal for Merit, the King’s Medal for Service in the Cause of Freedom and is an Officer of the Legion of Honour. Rabi was the Eugene Higgins professor of physics at Columbia but when Columbia created the rank of University Professor in 1964, Rabi was the first to receive such a chair. This meant that he was free to research or teach whatever he chose. He retired from teaching in 1967 but remained active in the department and held the title of University Professor Emeritus until his death. Isidor Isaac Rabi died from cancer on January 11, 1988, in New York at age 89.