You are here: Home › geology › John Milne and the History of Seismology On December 30, 1850, British geologist and mining engineer John Milne was born. He is best known for his invention of the horizontal pendulum seismograph (1894). Furthermore, he was one of the European scientists that helped organize the seismic survey of Japan in the last half of the 1800’s.

“In comparison with ourselves our world is large, its mountains and valleys are gigantic excrescences on its surface, whilst the elevations and depressions, representing continental elevations and ocean basins, form irregularities the magnitude of which we can only appreciate by the aid of figures.”
– John Milne, as quoted in [17]

Milne was born in Liverpool, England, the only child of John Milne of Milnrow, and at first raised in Rochdale and later moved to Richmond near London. He was educated at King’s College London (AKC in Applied Science, 1870) and the Royal School of Mines. At King’s College Milne undertook a variety of courses including Geology, Mathematics, Mechanics and Mineralogy and decided to focus his further studies on Geology and Mineralogy.[5] In the early 1870’s Milne gained practical experience in the mines of Cornwall and Lancashire, and in Germany studying Mineralogy at the University of Freiberg. His urge to travel during his university years also took him to Iceland with his great friend William Lord Watts, to explore the Vatnajokull glacier.[5]

He was asked to join an expedition to assess the geology and the mineral resources of Newfoundland and Labrador in the employment of Cyrus Field, an American financier and entrepreneur. Next to this expedition, Milne was mainly active as field geologist on a three month expedition together with Charles Tilstone Beke, which was sent out by the Royal Geographical Society to the Middle East. The intention of the expedition was to fix the exact location of Mount Sinai. Milne collected numerous rock specimens and fossils of which many were examined by the British Museum. These expeditions significantly increased Milne’s reputation and helped him to become Professor of Geology and Mining at the Imperial College of Engineering (I.C.E.) in Tokyo in 1875.

At this time a new era was unfolding in Japan, known as the Meiji Restoration of 1868. Under the Meiji Government one of the five provisions was to widen the knowledge base to ultimately strengthen the foundations of the new rule. As a result, the Imperial College of Engineering was founded in Tokyo. For a short period this was the largest technical college in the world, until 1886 when it became part of Tokyo University. [5] Rather than traveling to Tokyo on a Steam Ship, Milne preferred to travel overland across Europe, Russia, Siberia, Mongolia, and China. Back then, only little was known about the gold and copper mining regions in Russia and Siberia, wherefore Milne was highly interested in visiting them. Also, it is assumed that Milne often suffered sea-sickness. At the I.C.E., Milne was supported by the government to go on several field trips across the country. He visited many of Japan’s volcanoes and increased his enthusiasm regarding the country’s archeology and anthropology, which was stimulated even more by his colleague Professor Morse. In the twenty years that Milne was resident in Japan, Milne climbed over fifty volcanoes and also undertook what was considered pioneering exploration of the Kurile Islands, where a new volcano discovery was made by Milne himself.[5] Milne managed to report several mineral resources, especially the deposits of coal on Hokkaido were important.

It is assumed that Milne’s interest in seismology evolved around 1880 while elevating the subject from a geological past time into a modern instrument-based science. He was active at the center of Anglo-Japanese science of seismology for about 15 years. He founded the Seismological Society of Japan, which was the first known institution of this kind globally.[1] The founding of the institution followed a heavy earthquake in Yokohama and it funded the invention of seismographs in order to detect and measure the strength of earthquakes. 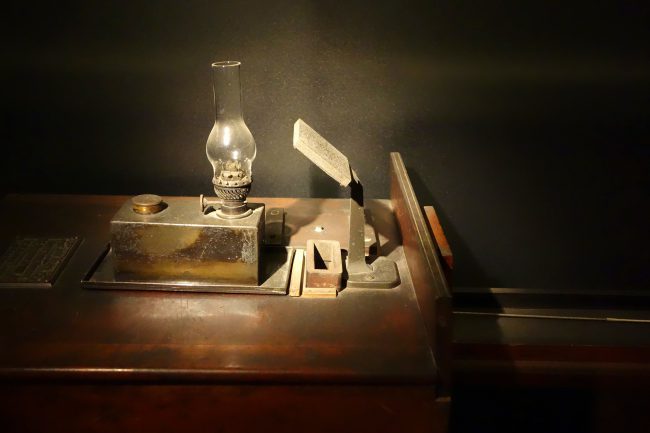 John Milne is mainly credited with the invention of the horizontal pendulum seismograph and Milne’s instruments probably allowed him to detect different types of earthquakes as well as estimate the waves’ velocities. For the first time the results that were collected enabled ground motion to be interpreted as a function of time.[5] The first reported use of any measurement of earthquake intensity has been attributed to the Italian Schiantarelli, who recorded the intensity of the 1783 earthquake that occurred in Calabria, Italy.[6] A seismograph is a device used in seismology that can register ground vibrations from earthquakes and other seismic waves. In principle, it consists of a mass mounted on a spring suspension. While the ground motion is transmitted to the housing of the instrument, the mass remains at rest due to its inertia. The relative movement of the ground can thus be measured as a change in length over time.

The oldest seismoscope in the world probably comes from the Empire of China. It was invented around 132 AD by Zhang Heng, imperial astronomer of the Han Dynasty – about 1600 years before the first seismographs were developed in the western world. The first Western description of the device comes from the French physicist and priest Jean de Hautefeuille in 1703. Around 1856, Luigi Palmieri developed electromagnetic seismographs in which a shock closed an electrical contact and thus enabled further actions such as recording the time or starting other devices. The horizontal pendulum seismograph of John Milne was improved after World War II with the Press-Ewing seismograph, developed in the United States for recording long-period waves. It is widely used throughout the world today. The Press-Ewing seismograph uses a Milne pendulum, but the pivot supporting the pendulum is replaced by an elastic wire to avoid friction.[6]

From 1882, Milne contributed also to anthropology. He helped to develop theories on the origin of the Ainu of northern Japan and on the prehistoric racial background of Japan in general. In June, 1895, Milne was commanded to attend a meeting with His Imperial Majesty Emperor Mutsuhito and following this, returned to England. Soon after his arrival he learned that the Emperor had conferred upon him a rare distinction, The Third Grade of the Order of the Rising Sun and a life pension of 1,000 yen. This was in recognition of Professor Milne’s contributions to seismology during his long residence in Japan.

After a fire in 1895 destroyed his home, observatory, library, and many of his instruments. Milne resigned his posts in Japan and returned to England with his Japanese wife, settling at Shide Hill House, Shide, on the Isle of Wight, where he continued his seismographic studies. John Milne was also a collector of seismological literature and established his library at the Isle of Wight after returning Britain. His large collection is on this day displayed at the Science Museum in London and includes many works by Milne, including ‘The Great Earthquake in Japan‘. [2]