You are here: Home › archeology › Christian Jürgensen Thomsen and the Three-Age System

On December 29, 1788, Danish antiquarian Christian Jürgensen Thomsen was born. He is best known for the development of early archaeological techniques and methods. He also introduced the Three-age system, i.e. the periodization of human prehistory into three consecutive time periods, named for their respective tool-making technologies, the Stone Ages, Iron Ages and Bronze Ages.

“…nothing is more important than to point out that hitherto we have not paid enough attention to what was found together.”
– Christian Jürgensen Thomsen, Letter to Schröder (1821)

Christian Jürgensen Thomsen was born in Copenhagen into a pretty wealthy merchant family. Not much is known about Thomsen’s early life and education. In 1807, Thomsen joined the Commission for the Preservation of Antiquities, founded in the same year and headed by Rasmus Nyerup (1759-1829). In 1816 Nyerup resigned from his post as head of the commission and Thomsen took over this post. In 1819 the Antiquities Collection became the Danish National Museum in Copenhagen and Thomsen became the first curator of the so-called Collection of Northern Antiquities. It is assumed that he was aware of the three-age-model through works of Lucretius, Vedel Simonsen, Montfaucon and Mahudel. These scholars had previously proposed that prehistory had advanced from an age of stone tools, to ages of tools made from bronze and iron, but these proposals were presented as systems of evolution, which did not allow dating of artifacts. However, Thomsen decided to sort the material in his collection chronologically. Prior to Thompson, the materials was often sorted according to their levels of the craftsmanship they demonstrated. He recognized that crude elements were often displayed together with fine ones and metal objects with stone artifacts.

Thomsen began to map out which phenomena occurred in the deposits and which did not. He discovered that often, stone tools were connected with amber, pottery, and glass beads while bronze was found with iron and gold. Silver however, was only found in connection with iron. Thomsen managed to connect each period with its preferred cutting material and he also discovered that grave goods differed between several burial types. Uncremated corpses and stone-chamber tombs were apparently found with stone tools while bronze weapons were more connected with stone-schist graves. Chamber tombs in barrows were more likely connected with iron. Interestingly, glass beads were found in all three periods, while glass bowls only appeared in the iron age, as Thomsen described.

The History of Periodization

In his poem, Works and Days, the ancient Greek poet Hesiod possibly between 750 and 650 BC, defined five successive Ages of Man: 1. Golden, 2. Silver, 3. Bronze, 4. Heroic and 5. Iron. Hesiod knew from the traditional poetry, such as the Iliad, and the heirloom bronze artifacts that abounded in Greek society, that before the use of iron to make tools and weapons, bronze had been the preferred material and iron was not smelted at all. The moral metaphor of the ages of metals continued. Lucretius, however, replaced moral degradation with the concept of progress, which he conceived to be like the growth of an individual human being. The Romans believed that the species of animals, including humans, were spontaneously generated from the materials of the Earth, because of which the Latin word mater, “mother”, descends to English-speakers as matter and material. According to Lucretius, the succession of periods was based on the use of stone (and wood), bronze and iron respectively. Italian physician Michele Mercati (1541 – 1593) was superintendent of the Vatican Botanical Garden. He was one of the first scholars to recognize prehistoric stone tools as human-made rather than natural or mythologically created thunderstones. Mercati posited that these stone tools must have been used when metal was unknown and cited Biblical passages to prove that in Biblical times stone was the first material used. On November 12, 1734, Nicholas Mahudel (1673-1747), physician, antiquarian and numismatist, read a paper at a public sitting of the Académie Royale des Inscriptions et Belles-Lettres in which he defined three “usages” of stone, bronze and iron in a chronological sequence. 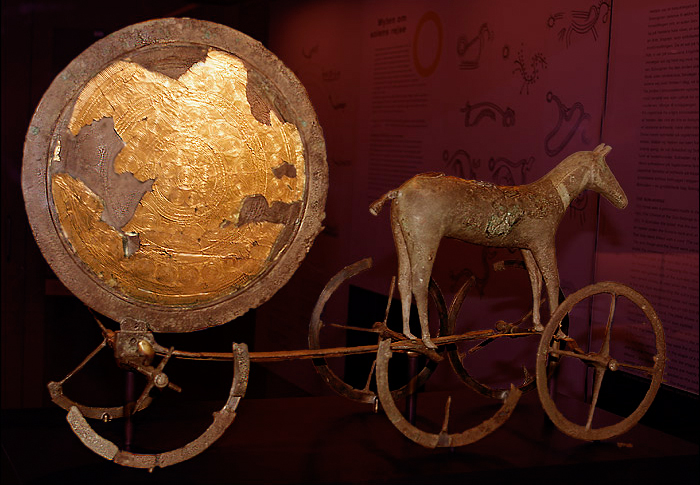 Solvogn from the Bronze Age, at display at the National Museum in Denmark
Image: Malene Thyssen, http://commons.wikimedia.org/wiki/User:Malene

“…we still do not know enough about most of the antiquities either; … only future archaeologists may be able to decide, but they will never be able to do so if they do not observe what things are found together and our collections are not brought to a greater degree of perfection.”
– Christian Jürgensen Thomsen, (1822)

Since there were no radiometric dates at the time of Thomsen, only stylistic observations helped him with this sorting, the find context of which had mostly not been handed down. Due to the comparatively few finds of the Late Glacial (Hamburg Culture, Bromme Culture) as well as of the Mesolithic in Denmark, Thomsen was mainly interested in Neolithic objects that had been preserved as grave goods. As examples of the earliest phase he called the “pagan period” (today Neolithic), “grinding stones”, “wedges”, “chisels”, “knives” and “spearheads” are mentioned, some of which are made of flint and, according to the illustrations, can be assigned to the Funnel Beaker Culture. Hammer axes with round or angular shaft holes indicate the inclusion of endneolithic forms as they occur in the Dagger Age or single grave culture. Here, too, these were mainly finds from graves.

Thomsen concluded that with the help of the archeological context, it was possible to develop a framework of the materials in the collection and classify ne finds according to their relation to the established chronology. This could be done, even without the exact knowledge of its provenience. This system was established around 1825 and the museum’s visitors were introduced to Thomsen’s method in detail. He published several scientific articles, emphasizing the importance of his findings. Finally, in 1836, he published the illustrated monograph Guide to Northern Antiquity, in which he described his chronology together with comments about which things occurred together in finds. His system was subsequently adopted by archaeology throughout Europe and its basic principles are still valid today for Europe and Eurasia.

More than a German-Danish Controversy

As early as 1835, the German Johann Friedrich Danneil had written a report on an excavation near Salzwedel, in which he also postulated the tripartite division of prehistory based on observations on burial mounds. One year later, Georg Christian Friedrich Lisch published a study on the chronological and ethnological division of prehistory, which he finally extended in 1839 – under the influence of Thomsen’s findings – to a three-period system. It can be assumed that at least Thomsen and Danneil independently developed the three-period system. Nevertheless, the question of which of the two first had the idea aroused a fierce debate between German and Danish archaeologists, which had mainly political motives and which therefore not coincidentally culminated during the German-Danish War of 1864. Already in the 19th century, the three-period system proved to be too coarse in its classification and was further subdivided by Thomsen’s student Jens Jacob Asmussen Worsaae as early as 1859-61. To this day, generations of prehistoric and early historians have divided the three-periodic system into several dozen sections. The three-periodic system was originally developed for Central Europe, but can be applied to the whole of Europe and large parts of Asia. In Africa, on the other hand, there is no Bronze Age, but a direct transition from the Stone Age to the Iron Age; nor is the system applicable to both American continents.

Later Thomsen was given the directorship of the coin and medal collection, the inspection of the painting collection and the ethnographic museum. In 1861 he became director of all the collections of which he was the actual creator and steward. In 1864 he was accepted as a corresponding member of the Russian Academy of Sciences in St. Petersburg. Christian Jürgenssen Thomsen died on May 21, 1865, in Copenhagen, Denmark, at age 76.

William Parkison, Revolutions: The Age of Metal and the Evolution of European Civilization, [7]