You are here: Home › chemistry › John Jacob Abel and the Endocrine Glands 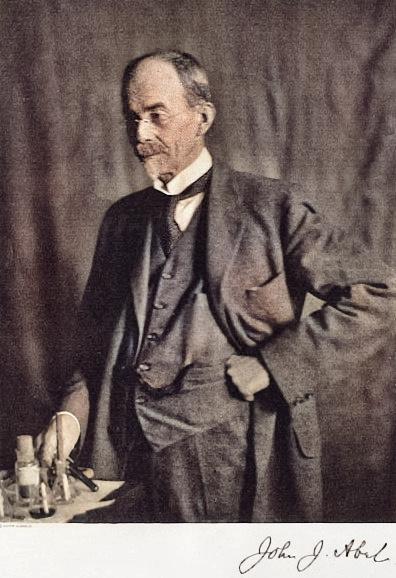 On May 19, 1857, American biochemist and pharmacologist John Jacob Abel was born. Abel made important contributions to a modern understanding of the ductless, or endocrine, glands. He extracted a derivative of epinephrine, also known as adrenaline and successfully purified and isolated crystalline insulin. His interest in kidney functions led to his invention of a primitive artificial kidney that was able to remove toxins from the blood of living animals, the precursor to the dialysis machine.

“As soon as we touch the complex processes that go on in a living thing, be it plant or animal, we are at once forced to use the methods of this science [chemistry]. No longer will the microscope, the kymograph, the scalpel avail for the complete solution of the problem. For the further analysis of these phenomena which are in flux and flow, the investigator must associate himself with those who have labored in fields where molecules and atoms, rather than multicellular tissues or even unicellular organisms, are the units of study.”
— John Jacob Abel as quoted in [8] (1915)

John Jacob Abel was born near Cleveland, Ohio, USA, into a moderately prosperous farmer family to George M. and Mary (Becker) Abel. He earned his Ph.B. (Bachelor of Philosophy) from the University of Michigan where he studied with physiologist Henry Sewall in 1883. Due to financial reasons he took several years off to serve as a principal of the high school in La Porte, Indiana, where he taught many subjects ranging from chemistry and physics to Latin. Then, he went to study at Johns Hopkins University, under Henry Newell Martin, a cardiac physiologist and professor of biology. He then left for Europe staying until 1890, starting in Leipzig studying medical sciences, then traveling to Strasbourg where he received an M.D. in 1888 from the University of Strasbourg.

Focussing on Biochemistry and Pharmacology

Abel worked mostly in clinical studies and took clinical courses, focusing on biochemistry and pharmacology, and continued to conduct research in biochemistry. During this time, Abel had a number of prominent mentors that inspired his work and exposed him to a number of disciplines, such as Ludwig von Frey in physiology and histology, Rudolf Boehm in pharmacology, Adolph Strümpell in pathology, and Johannes Wislicenus in organic and inorganic chemistry, and Oswald Schmiedeberg in Strassbourg, who sparked his interest in pharmacological research. In 1890, Abel returned to the University of Michigan as the chair of Materia Medica and Therapeutics, where he played an important role in developing the first pharmacology department in North America. In 1893, Abel was invited to join John Hopkins School as the chair of pharmacology and biological chemistry.

At Johns Hopkins, Abel performed his most groundbreaking research and held the position of chair of the department until he retired in 1932. One of Abel’s earliest research interests was the isolation of pure form of internal gland hormones. His first success was the isolation of epinephrine from adrenal medulla. However, he was only able to isolate a monobenzoyl derivative of epinephrine. While he was improving his processes on decomposing the benzoyl derivative to obtain salts of epinephrine using saponification, a Japanese chemist J. Takamine was able to successfully isolate the neutral base of epinephrine by adding ammonium to highly concentrated extract, a method Abel himself tried but failed due to the use of low concentration of extract.

In 1914, together with L.G. Rowntree and B.B. Turner, Abel devised a dialysis machine what they called a “vividiffusion” apparatus, consisting of a series of tubes surrounded by fluid, allowing arterial blood to enter at one end of the connection, and later return to circulation through the venous connection after dialysis. By this they were able to demonstrate the existence of free amino acids in blood. Abel conducted various subsequent researches on the structure of proteins in the blood. The vividiffusion apparatus Abel devised is the precursor to the modern day dialysis machine. 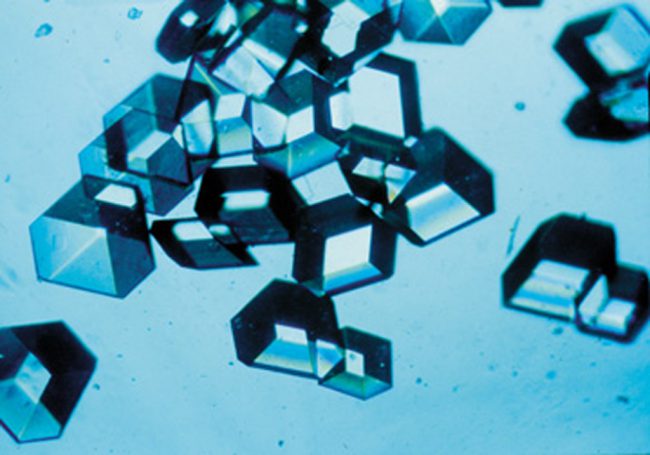 Abel’s work on insulin started with the purification of insulin. He had the idea to measure sulfur content of his extracts and found that the higher the sulfur content, the greater the activity. Continuing with his research on extracting insulin, on November 1925, Abel finally was able to witness one of the most beautiful sights of his life, “glistening crystals of insulin forming on the sides of a test tube”. Although Abel’s work received great compliments from the media and the science community, some doubted the purity of his crystals as preliminary tests revealed that they were in fact proteins. The test result was contrary to the dominant view at the time on proteins—proteins and was published in 1927 in the journal Science as “Chemistry in Relation to Biology and Medicine with Especial Reference to Insulin and Other Hormones“. Abel’s laboratory has become the center of insulin research in the United States.

Despite his great dedication to experimentation work, Abel was also the founder of a number of influential scientific journals, such as the Journal of Biological Chemistry (1905) and the Journal of Pharmacology and Experimental Therapeutics (1908). Abel’s insulin work and that of his students played an important part in the line of research culminating in Frederick Sanger’s identification in 1955 of the complete primary structure of insulin, the first protein structure to be thus elucidated.[2,5] Abel himself gradually withdrew from the actual experimental work on insulin after the first four years, but he continued to guide the scientists in his lab to unravel more and more about the structure of insulin molecule. John Jacob Abel died on 26 May 1938, at age 81.

The immune system: looking for love in all the right places | Jim Brewer | TEDxGlasgow, [7]