You are here: Home › chemistry › Frederick Sanger and the Structure of Proteins 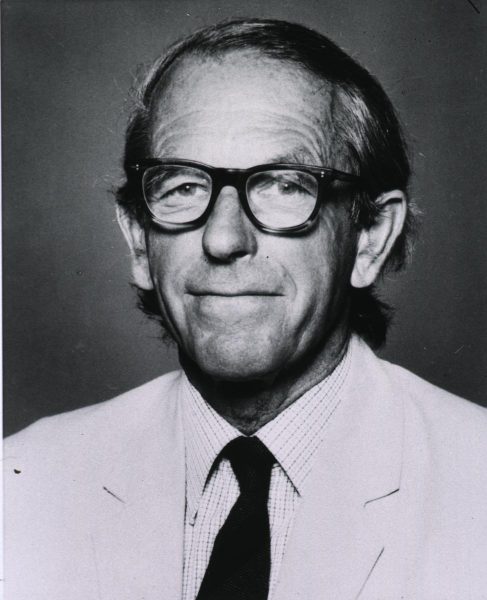 On August 13, 1918, British biochemist Frederick Sanger was born. In 1958, he was awarded a Nobel Prize in chemistry “for his work on the structure of proteins, especially that of insulin“. In 1980, Walter Gilbert and Sanger shared half of the chemistry prize “for their contributions concerning the determination of base sequences in nucleic acids“.

“Scientific research is one of the most exciting and rewarding of occupations. It is like a voyage of discovery into unknown lands, seeking not for new territory but for new knowledge. It should appeal to those with a good sense of adventure. ”
Frederick Sanger, From Nobel Banquet Speech (10 Dec 1980).

Frederick Sanger was in Rendcomb, a small village in Gloucestershire, England, the second son of Frederick Sanger, a general practitioner, and his wife, Cicely Sanger. His father had worked as an Anglican medical missionary in China but returned to England because of ill health. The reasonably wealthy family moved to the small village of Tanworth-in-Arden in Warwickshire, where the children were taught by a a governess. In 1927, Sanger was sent to the Downs School and at age 14 to the Bryanston School in Dorset, where he worked his last year of school experimenting in the laboratory alongside his chemistry master, Geoffrey Ordish, who had originally studied at Cambridge University and been a researcher in the Cavendish Laboratory.

In 1936 Sanger went to St John’s College, Cambridge to study natural sciences with courses on physics, chemistry, biochemistry and mathematics. He was an average student and found physics too difficult; therefore, he took up physiology and enrolled in a brand new course called “biochemistry,” where he excelled and obtained a 1st Class Honours in December 1940.[3] Under the Military Training Act 1939 he was provisionally registered as a conscientious objector, and again under the National Service (Armed Forces) Act 1939, before being granted unconditional exemption from military service by a tribunal. In the meantime he undertook training in social relief work at the Quaker centre, Spicelands, Devon and served briefly as a hospital orderly.

Sequencing the Amino Acids of Insulin

Sanger began studying for a PhD in 1940 under Norman Pirie, where his task was the investigation whether edible protein could be obtained from grass. After little more than a month Pirie left the department and Albert Neuberger became his adviser. Sanger changed his research project to study the metabolism of lysine and a more practical problem concerning the nitrogen of potatoes. In 1943, he was awarded his PhD with a thesis on “The metabolism of the amino acid lysine in the animal body“. From 1944 to 1951 he held a Beit Memorial Fellowship for Medical Research and since 1951 he has been a member of the External Staff of the Medical Research Council. [1]

In 1943, Sander joined the group of protein chemist Charles Chibnall, who had already worked on the amino acid composition of bovine insulin. Chibnall suggested that Sanger look at the amino groups in the protein. Sanger’s first triumph was to determine the complete amino acid sequence of the two polypeptide chains of bovine insulin, A and B, in 1952 and 1951, respectively. When Chibnall first tried to get Sanger a grant from the Medical Research Council to work on protein structure, the grant was refused because it was believed that the pattern of amino acids in a protein was simply random. Sanger came up with a technique using a special marking agent, now known as Sanger’s reagent, for breaking the long chains of amino acids in protein molecules into short fragments. He worked out their constitution and gradually pieced together the structure of the whole molecule. Overall, it took Sanger 10 years of carefully identifying small fragments of the insulin molecule and working out their composition to arrive at its structure. By 1953 he not only had the exact sequence of amino acids for insulin, but had also shown the precise but quite small differences that existed between the insulin of different mammalian species.[2]

In determining these sequences, Sanger proved that proteins have a defined chemical composition. It was this achievement that earned him his first Nobel prize in Chemistry in 1958. This discovery was crucial for the later sequence hypothesis of Francis Crick for developing ideas of how DNA codes for proteins.

From 1951 Sanger began exploring the possibility of sequencing RNA molecules and began developing methods for separating ribonucleotide fragments generated with specific nucleases. The key challenge in the work was finding a pure piece of RNA to sequence. In the course of the work he discovered in 1964, with Kjeld Marcker, the formylmethionine tRNA which initiates protein synthesis in bacteria. He was beaten in the race to be the first to sequence a tRNA molecule by a group led by Robert Holley from Cornell University, who published the sequence of the 77 ribonucleotides of alanine tRNA from Saccharomyces cerevisiae in 1965. By 1967 Sanger’s group had determined the nucleotide sequence of the 5S ribosomal RNA from Escherichia coli, a small RNA of 120 nucleotides.

Sequencing DNA with the “Sanger-Method”

He then turned to sequencing DNA, which would require an entirely different approach. In 1975, together with Alan Coulson, he published a sequencing procedure using DNA polymerase with radiolabelled nucleotides that he called the “Plus and Minus” technique. The procedure could sequence up to 80 nucleotides in one go and was a big improvement on what had gone before, but was still very laborious. Nevertheless, his group were able to sequence most of the 5,386 nucleotides of the single-stranded bacteriophage φX174, which was the first fully sequenced DNA-based genome. In 1977 Sanger and colleagues introduced the “dideoxy” chain-termination method for sequencing DNA molecules, also known as the “Sanger method“. This was a major breakthrough and allowed long stretches of DNA to be rapidly and accurately sequenced. It earned him his second Nobel prize in Chemistry in 1980, which he shared with Walter Gilbert and Paul Berg. The new method was used by Sanger and colleagues to sequence human mitochondrial DNA (16,569 base pairs) and bacteriophage λ (48,502 base pairs). The dideoxy method was eventually used to sequence the entire human genome.

Sanger retired in 1983 and devoted himself to his garden in the Cambridge fens, exchanged his laboratory bench for one of a cabinetmaker, and pottered about on the river. He refused a knighthood but accepted an OM in 1986. The Sanger Centre (which became the Sanger Institute), was opened in 1993 to continue his work in DNA sequencing.[2] Frederick Sanger passed away on 19. November 2013, aged 95.

George Brownlee, Fred Sanger, the biologist who worked out how to sequence proteins, RNA and DNA [6]