You are here: Home › engineering › Hideo Shima and the Bullet Train 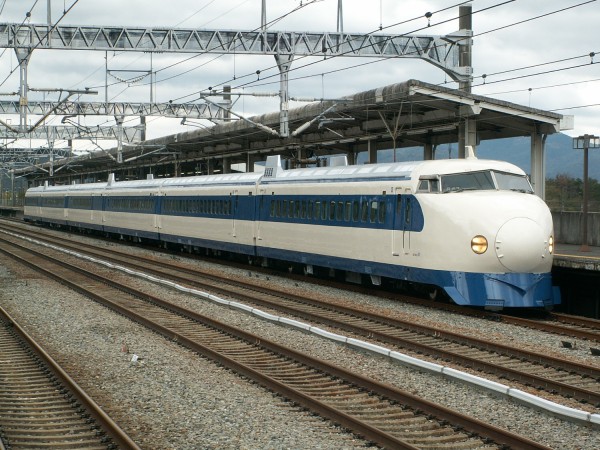 The Shinkansen A0 Series, the “Bullet Train”

On May 20, 1901, Japanese engineer Hideo Shima was born. Shima was the driving force behind the building of the first bullet train, the Shinkansen, linking Tokyo and Osaka in Oct 1964. Shima also led Japan‘s space development programme until 1977 at Japan’s National Space Development Agency.

The Son of a Railway Engineer

Hideo Shima was born in Osaka as the son of a prominent railway engineer and educated at the Tokyo Imperial University in 1925, where he studied engineering. His father was part of a group of officials that had built up Japan’s emerging railroad industry.

Hideo Shima joined the Ministry of Railways (Japanese Government Railways) in 1925, where, as a rolling-stock engineer, he designed steam locomotives. Using new techniques to balance the driving wheels and new valve gear designs, he helped design Japan’s first 3-cylinder locomotive – the Class C53, which was based on the Class C52 imported from the USA. Shima also participated in the design and fabrication of a standard automobile which was mass-produced when World War II broke out. This experience helped in the rapid growth of the Japanese automobile industry after the war.

The Hachiko Line derailment in 1947 was a turning point in his career. JGR used the opportunity to obtain permission from SCAP to modify all wooden passenger cars (approximately 3,000 were in use then) to a steel construction within a few year. It was during these years that he came up with an innovation that would later be employed in the bullet trains – the use of trains driven by electric motors in the individual rail cars, rather than by an engine at the front (“distributed-power multiple-unit control systems”).

Chief Engineer of the Shinkasen Line

By 1948 he had worked his way up to head of the rolling stock department, but he resigned three years later after following the Japanese tradition of taking responsibility for a fire at Yokohama station that killed more than 100 people.[1] He worked briefly for Sumitomo Metal Industries, but was asked by Shinji Sogō, the president of JNR, to come back and oversee the building of the first Shinkansen line (“new trunk line”), a 515-km-long high-speed train line between Tokyo and Osaka, as chief engineer, in 1955.

Japan was the first country to build dedicated railway lines for high-speed travel. Because of the mountainous terrain, the existing network consisted of narrow-gauge lines, which generally took indirect routes and could not be adapted to higher speeds. Consequently, Japan had a greater need for new high-speed lines than countries where the existing standard gauge or broad gauge rail system had more upgrade potential.

In addition to its innovative propulsion system, the Shinkansen also introduced features like air suspension and air-conditioning. Shima’s team designed the sleek cone-shaped front from which the bullet train got its name. The cost of the first Shinkansen line also cost Shima his job. The building of the first line, which needed 3,000 bridges and 67 tunnels to allow a clear and largely straight path, led to such huge cost overruns that he resigned in 1963, along with the president, Shinji Sogō, who had backed Shima’s ideas, even though the line proved to be popular and well-used. The project was completed just in time for the 1964 Summer Olympic Games in Tokyo, but Shima was not invited to the opening ceremony.

The Shinkansen was the world’s first train to reach top speeds above 209 km/h. This bullet train, named after its aerodynamically shaped head, featured wide-gauge tracks, air suspension, and individually motorized cars instead of a sole front engine. Because the tracks were not shared with other trains, safety and punctuality were unprecedented. Despite the costs, Shinkansen rapidly expanded in the following years, and the train became a symbol of Japan’s postwar economic prowess. [1]

The Fastest Trains in the World

The conventional Limited Express service took six hours and 40 minutes from Tokyo to Osaka, but the Shinkansen made the trip in just four hours, shortened to three hours and ten minutes by 1965. It enabled day trips between Tokyo and Osaka, the two largest metropolises in Japan, changed the style of business and life of the Japanese people significantly, and increased new traffic demand. The service was an immediate success, reaching the 100 million passenger mark in less than three years on 13 July 1967, and one billion passengers in 1976. Japan’s renowned bullet trains have made domestic flying all but redundant between major cities. Not only are they very fast, frequent, spotlessly clean and on time to the second, but their carbon footprint is 16% that of cars making the same journeys according to the Japan Railway and Transport review.[4] Since 2014, Shinkansen trains run regularly at speeds up to 320 km/h (200 mph), placing them alongside the French TGV and German ICE as the fastest trains in the world.

After his resignation Shima continued to advise railway officials, especially on safety issues. In 1969 he began a new career as head of the National Space Development Agency. That same year he became the first non-Westerner to receive the James Watt International Medal of Great Britain’s Institution of Mechanical Engineers. He retired from the agency’s top post in 1977. In Japan he was awarded the Order of Cultural Merit in 1994. Hideo Shima died on 18 March 1998, at age 96.