You are here: Home › history › Health advocate John Harvey Kellogg and the Invention of Flaked Cereals 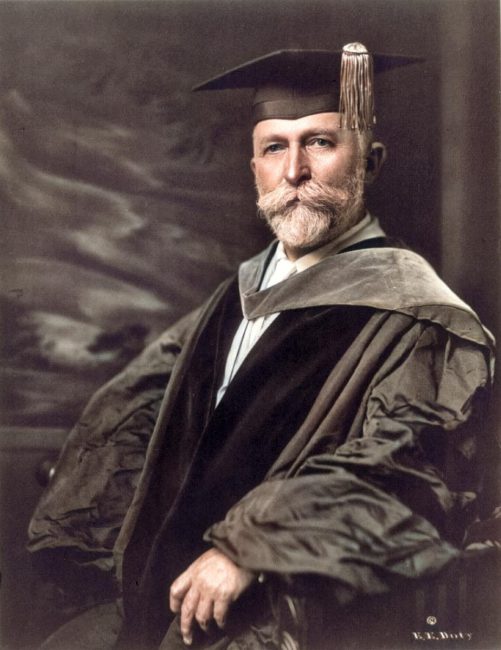 On May 31, 1884, the health-food fanatic John Harvey Kellogg patented his ‘flaked cereal‘ during his time as the superintendent of the ‘Battle Creek Sanitarium‘ in Michigan.

“A dead cow or sheep lying in a pasture is recognized as carrion. The same sort of a carcass dressed and hung up in a butcher’s stall passes as food. “
– John Harvey Kellogg

John Harvey Kellogg became familiar with healthy eating and healthy lifestyles after getting to know James Springer and Ellen White. For their works Health, or how to live and The Health Reformer, Kellogg was occupied as editor and proof-reader. In order to become a teacher, Kellogg enrolled in a teacher’s training course in Michigan. However, influenced by the Whites, Kellogg later attended a medical course. Under their patronage, John Harvey Kellogg went on to attend medical school at the University Medical School in Ann Arbor, Michigan and the New York University Medical College at Bellevue Hospital in New York City. Their goal was to develop a group of trained doctors for the Adventist-inspired Western Health Reform Institute in Battle Creek. In 1875, Kellogg graduated with a medical degree and one year later he became the director of the Western Health Reform Institute, which was later renamed to Battle Creek Medical Surgical Sanitarium.

Not Only A Vegetarian Diet…

The Battle Creek Sanitarium was owned and operated by the Seventh-day Adventist Church, accordingly it was operated based on the church’s principles. That means, a vegetarian diet was promoted as well as alcohol and tobacco abstinence and exercise. Kellogg himself further promoted nuts. He even invented a process for making peanut butter. The sanitarium had its own experimental kitchen. There, Kellogg’s wife Ella Eaton Kellogg developed vegetarian foods and taught cooking classes. She further published a cookbook entitled Science in the Kitchen. Kellogg was convinced that many diseases could be treated with an improved diet including low-protein, laxative, and high-fiber foods. Kellogg further advocated the frequent use of an enema machine to cleanse the bowel with several gallons of water. This was followed by the administration of a pint of yogurt. Half of it was eaten and the other half was administered by enema. 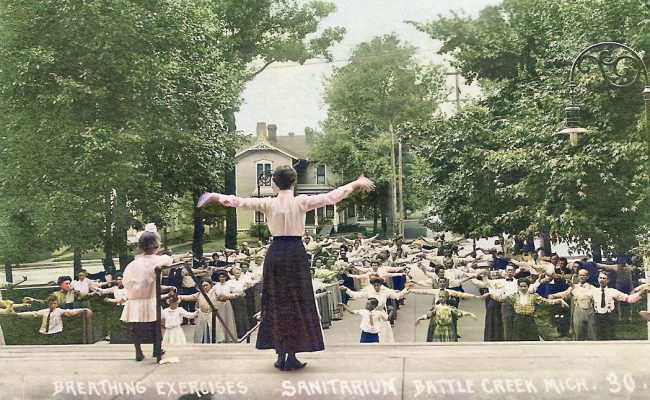 Inventing Something New for Breakfast

In 1877, John Kellogg started to experiment with breakfast food. He intended to create something that was easy to chew and developed a mixture of wheat, oats, and corn. This mixture was baked and later broken into crumbs. This cereal was first promoted under the name Granula and later Granola. First it was consumed by patients at the sanitarium but later spread beyond sthe institution. In 1890, Kellogg formed the Sanitas Food Company to develop and market food products. In 1894, Kellogg along with his wife and younger brother Will developed the famous flaked cereal. A patent for “Flaked Cereals and Process of Preparing Same” was filed on May 31, 1895, and issued on April 14, 1896 to John Harvey Kellogg as Patent No. 558,393. During their first year of production, the Kelloggs sold tens of thousands of pounds of flaked cereal, marketing it as Granose. They further experimented with rice, corn and wheat and released the first batch of Sanitas Toasted Corn Flakes in 1898.

Meanwhile, Will Kellogg continued the development and marketing of the flaked cereal. When he brought up the idea to add sugar to the flakes, John disagreed. As a result, Will Kellogg started his own company, the Battle Creek Toasted Corn Flake Company which initiated a feud between the brothers. Will’s Battle Creek Toasted Corn Flake Company would eventually became the Kellogg Company, while John H. Kellogg would be denied the right to use the Kellogg name for his cereals. John Harvey Kellogg was inducted into the National Inventors Hall of Fame in 2006 for the discovery of tempering and the invention of the first dry flaked breakfast cereal, which “transformed the typical American breakfast”.

The 1993 novel The Road to Wellville by T. C. Boyle is a fictional satirical story about Kellogg and his sanatorium. The book was directed by Alan Parker and released in 1994. Anthony Hopkins starred as Kellogg. During his lifetime he was regarded as a champion of health and sexual abstinence. But he began every day with an enema, a habit that some psychologists classify as clismaphilia (sexual pleasure gained through enema).