You are here: Home › philosophy › Mikhail Bakunin – the Father of Anarchism 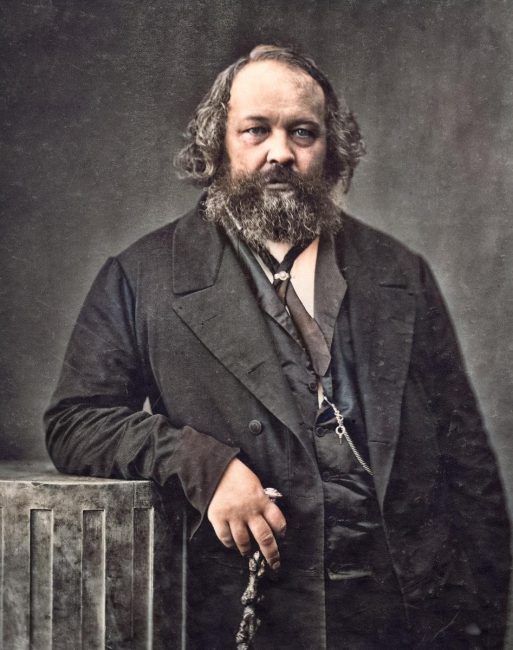 On May 30, 1814 (julian calendar May 18), Russian revolutionary and philosopher Mikhail Alexandrovich Bakunin was born. Although many scholars argue if he is the founder of anarchist theory in general, he was the leading theorist of collectivist anarchism.

“To revolt is a natural tendency of life. Even a worm turns against the foot that crushes it. In general, the vitality and relative dignity of an animal can be measured by the intensity of its instinct to revolt.”
– Mikhail Bakunin, “On the International Workingmen’s Association and Karl Marx” (1872)

Mikhail Bakunin was born as the eldest son and third of eleven children of an aristocratic family in the small village of Prjamuchino, Tver Governorate of the Russian Empire (present-day Kuvshinovsky District, Tver Oblast of Russia), where grew up in a quite politically active family with his father being a diplomat. At the age of 14, he was sent to military school in Saint Petersburg followed by his duty as an officer in the Russian Imperial Guard until 1835. He was deeply dissatisfied with the military and the military manners. In 1832, at the age of 18, he was sent as a lieutenant to Grodno, where he arrived shortly after the Polish uprising. The brutality with which the Russian empire proceeded in the suppression shocked the young Bakunin; his revulsion towards the military grew. After disputes with his family, Bakunin left his career for Moscow, where he hoped to become a philosopher. Bakunin was particularly interested in German philosophy and read Kant, Fichte and Schelling.

The young philosopher then moved to Berlin to begin his academic career, where he was influenced by a rising socialist movement. The career his father wished for was quickly abandoned, after Bakunin put more and more effort in the revolution, which highly dissatisfied the Russian government as well. In the following years, Mikhail Bakunin lived in various European cities, being influenced by the philosophies of Marx, Engels, and befriended philosophers. Bakunin now became more interested in socialism. The book Socialism and Communism of Modern France by Lorenz von Stein, which popularized the ideas of French early socialists as well as Louis Blanc and Pierre-Joseph Proudhon in German-speaking countries, played a special role here. He wrote several articles, eventually calling himself a communist at certain times. His activities in the revolution were showing increasing effects in Europe and the governments of several countries, including his own Russia and Austria searched for him and threatened life time imprisonment and death penalty.

“No theory, no ready-made system, no book that has ever been written will save the world. I cleave to no system. I am a true seeker.”
– Mikhail Bakunin, As quoted in Michael Bakunin (1937) by E.H. Carr, p. 175

In 1844 he settled in Paris, the centre of European radicalism at the time. After the outbreak of the February Revolution in 1848, which led to the overthrow of Louis-Philippe I and the proclamation of the Second French Republic, Bakunin took part in the revolutionary struggle. Bakunin was disappointed by the course of the 1848 revolutions, especially by the results in Germany, where the Frankfurt National Assembly decided to place areas inhabited by Poland and Czechs under German rule. In May 1849 he took part in a leading position in the uprising in Dresden to enforce a Saxon republic. Initially this was in favour of the rebels, and King Frederick August II, who had previously dissolved parliament and rejected the constitution, had to flee.  With the help of a large Prussian military contingent Dresden was besieged, and after seven days the insurgents were forced to move towards Freiberg. On 10 May 1849, however, Bakunin was arrested together with August Röckel and Otto Leonhard Heubner in Chemnitz, where they wanted to collect the rebellious forces. 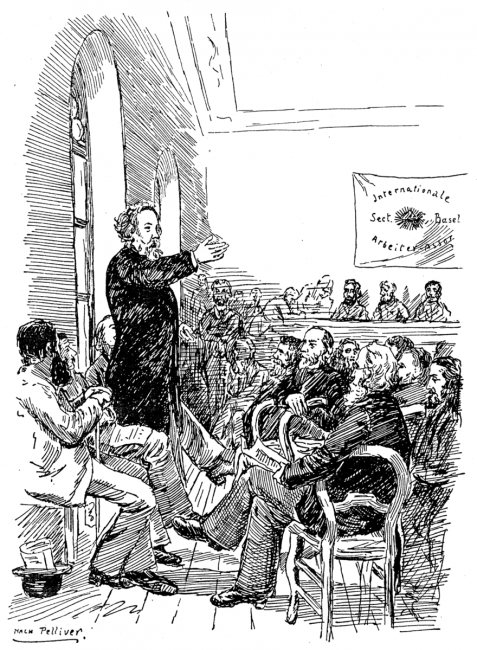 Bakunin speaking to members of the IWA at the congress in Basel 1869.

Bakunin was imprisoned first in Dresden, then in the Königstein fortress. In the Kingdom of Saxony he was sentenced to death after his arrest, but later his sentence was converted into life imprisonment. Shortly after his arrest, Russia and also – because of his participation in the Slavic Congress and the Prague Uprising – Austria demanded his extradition.  On 17 May 1851 Bakunin returned to Russian soil as a prisoner after Austria had extradited him. He came, like many other Russian political prisoners, to the infamous Peter and Paul fortress in St. Petersburg. During these years, he suffered physically and mentally, and seven years later he was sent to permanent exile near Tomsk. Bakunin managed to escape from exile and traveled through Europe, but always focusing on Italy, which he arrived in 1864.

“The liberty of man consists solely in this: that he obeys natural laws because he has himself recognized them as such, and not because they have been externally imposed upon him by any extrinsic will whatever, divine or human, collective or individual.”
– Mikhail Bakunin, God and the State (1871; publ. 1882)

His stay in Italy was a great influence to Bakunin, since he developed his initial anarchist theories there. Bakunin founded the secret Alliance of Revolutionary Socialists along with like minded across Europe. The group was active all over the continent, opposing all kinds of hierarchical systems, authority and religion. Mikhail Bakunin rejected capitalism as he found it completely incompatible with everyone’s individual freedom. He also criticized many of Marx’s ideas, claiming that a communist state Marx’s pledged for would enforce a dangerous dictatorship. Bakunin returned to Geneva in 1867 to attend the founding congress of the International League for Peace and Freedom. He was elected to the Central Committee of the newly formed League, but his attempt to dissuade the organization from its moderate course was rejected by a majority of its members.

“Revolution requires extensive and widespread destruction, a fecund and renovating destruction, since in this way and only this way are new worlds born”
– Mikhail Bakunin, “Statism and Anarchy” (1873)

Bakunin wrote his work Statehood and Anarchy in 1873, which was smuggled into Russia in large numbers and strongly influenced the Narodniki movement. In it, he called on the young revolutionaries in Russia to participate in the lives of the peasants, to experience their problems and thus to bring the revolution to the people. Also in Switzerland, Bakunin met the 18-year-old social revolutionary Errico Malatesta, who was wanted in Italy and, influenced by Bakunin, became one of the spokesmen of Italian anarchism in the following decades. His health deteriorated surprisingly quickly. On July 1, 1876, shortly before noon, Michael Bakunin died of his illness at the age of 62.

As Bakunin’s disagreements with Karl Marx grew, he is now remembered as one of his greatest opponents, even though Marx and Bakunin had much in common. Mikhail Bakunin’s ideas influenced many political activists of during his life time and beyond. For instance Noam Chomsky, the famous American philosopher, logician, historian, political critic, and activist was critically influenced by Bakunin just as Neil Postman. In October 1873, Bakunin decided to withdraw from the anarchist workers movement and left the Jura Federation, believing that he could do nothing more for the movement. At that time he was marked by a serious illness and resigned, because his expectation of the near revolution had not been fulfilled and faith in it waned.