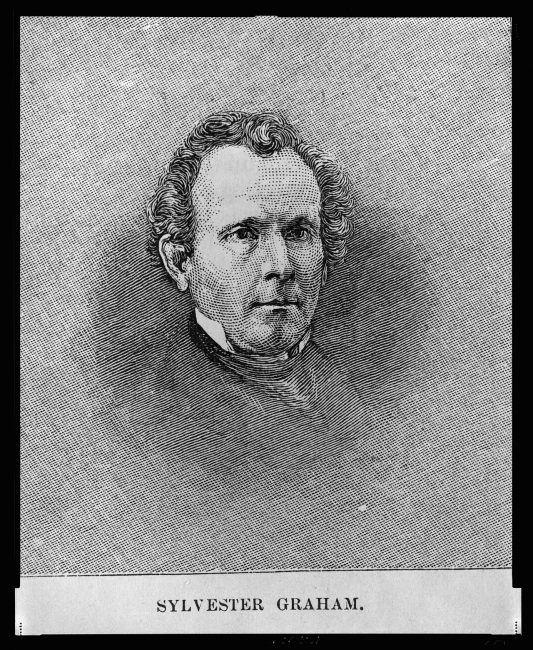 On July 5, 1794, American Presbyterian minister and dietary reformer Sylvester Graham was born. Graham is best known for his emphasis on vegetarianism, the temperance movement and his emphasis on eating whole-grain bread; he did not invent graham flour, graham bread, or graham crackers, but those products were inspired by his preaching.

Sylvester Graham was born in 1794 as the son of a pastor who was already 70 years old at the time, and died two years later. His mother was presumably ill, in any case he grew up with relatives. He worked as a teacher, but quit the service early due to massive health problems. His relatives ran a tavern where Graham also worked and as a result, Graham developed a strong aversion against alcohol. Later on, he decided to become a minister and joined Amherst Academy. Unfortunately, Sylvester Graham was forced to leave when a scandal was created that he improperly approached a woman.

In 1828, Graham started working as an itinerant preacher in New Jersey. He was offered a position at the Philadelphia Temperance Society. The society was led by doctors who  were primarily concerned about health effects of alcohol. There he met William Metcalfe, an English minister who established a vegetarian church in Philadelphia, and William A. Alcott, a Philadelphia doctor who wrote extensively about vegetarianism and wrote the first American vegetarian cookbook. Graham was highly influenced by the society and came to the conclusion that meat was just as much an expression and spur to gluttony as alcohol was, and that both corrupted both the body and soul of individuals and harmed families and society. It is believed that the book written by François-Joseph-Victor Broussais, ‘Treatise on Physiology‘ highly influenced Graham, next to the works of the German chemist Friedrich Accum.[5]

After six month at the Philadelphia Temperance Society, Graham quit in order to focus on his preaching on health. Around 1829, Sylvester Graham developed the Graham diet. It consisted of mostly fresh fruits and vegetables, whole wheat and high fiber foods, and excluded meat and spices altogether. Further, fresh milk, cheese, and eggs were permitted in moderation. Apparently, Graham believed that this diet would prevent people from having impure thoughts and in turn would stop for instance masturbation. Graham’s diet had a moderate response and it was even strictly imposed on students of Oberlin College by David Campbell until it was dropped in 1841 due to a public outcry.

When cholera took its toll in Europe, Americans were terrified that the epidemic would reach America. Back then it was believed by many that eating plenty of meat, drinking port wine, and avoid vegetables were the best way to prevent contracting cholera and that cholera was a plague sent by God in order to publish people. Sylvester Graham’s preaching included topics as patriotism, religion, lifestyle, health, and diet. When the epidemic finally reached New York in 1832, Graham received a lot of fame. His successful book ‘Treatise on Bread and Bread-Making‘ appeared in 1837 and his lectures were always full. Grahamism became a widely spread movement and inspired by his preaching, graham flour, graham bread, and graham crackers were produced.

With his theories he succeeded in winning over a flock of followers, the so-called Grahamites. They practiced abstinence from alcohol, frequent bathing, daily brushing of teeth, vegetarianism, and a generally sparse lifestyle. Nevertheless, he was ridiculed by many contemporaries for his unshakable and fanatical enthusiasm. According to newspaper reports, many ladies fainted during his lectures as soon as he publicly expressed his views on sexuality, especially masturbation, and his aversion to wearing corsets.  In 1829, he developed the graham bread, which is still known today, as a component of a diet made from finely ground wholemeal wheat without the usual additives of the time, such as toxic bleaching agents. A further invention was the graham cracker, biscuits made from wholemeal wheat. The diet was purely vegetarian and was based mainly on fresh fruit and vegetables and whole grain. Meat and spices were taboo. Butter was allowed in small amounts, as well as very fresh milk, cheese and eggs. In his opinion, abstaining from meat and spices had a dampening effect on the libido. In the 1830s, the diet found supporters in the USA, especially among the Puritans. Even some restaurants specialized in the Graham diet, such as in New York and Boston.

However, some Grahamites lost faith when their mentor died ion 1851 at the age of fifty-seven. His doctrines found later followers in the persons of Dr. John Harvey Kellogg and his brother Will Keith Kellogg.[4] Their invention of corn flakes was a logical extension of the Grahamite approach to nutrition.

Food as Medicine: Preventing and Treating the Most Common Diseases with Diet, [9]