You are here: Home › medical science › Ancel Keys and the Effect of Saturated Fats on Our Health 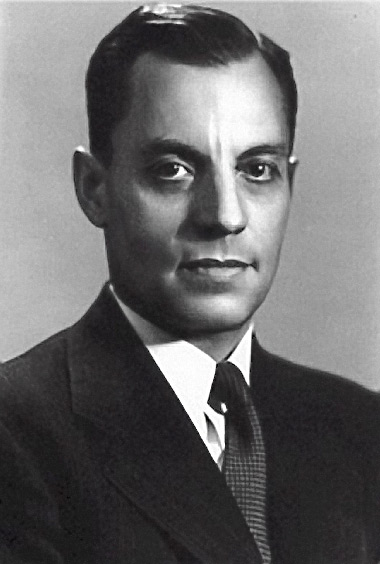 On January 26, 1904, American nutritionist and epidemiologist Ancel Keys was born. Keys studied the influence of diet on health. In particular, he hypothesized that saturated fat in the diet is unhealthy and should be avoided. He also was the first to identify the role of saturated fats in causing heart disease.

Ancel Keys was born in Colorado Springs in 1904 to Benjamin Pious Keys (1883-1961) and Carolyn Emma Chaney (1885-1960), the sister of US-american stage and film actor Lon Chaney. In 1906 they moved to San Francisco before the 1906 San Francisco earthquake struck, after which the family relocated to Berkeley where he grew up. After finishing his secondary education, Ancel Keys was admitted to the University of California at Berkeley in 1922 to study chemistry, but took time off to work as an oiler aboard the S.S. President Wilson (1st) travelling to China. Keys later graduated in 1925 with a B.A. in economics and political science and in 1928 with an M.Sc. in zoology. He continued his studies at Scripps Institution of Oceanography  in La Jolla on a fellowship and earned his Ph.D. in oceanography and biology from UC Berkeley in 1930. With another fellowship, Ancel Keys traveled to Kopenhagen studying under August Krogh at the Zoophysiological Laboratory. Upon his return to the United States, Keys taught at Harvard and later returned to Cambridge where he earned a second Ph.D. in physiology in 1936.

Research on Sports Physiology and K-Rations

When Keys returned to the United States in 1933, he began researching sports physiology at the Fatigue Laboratory at Harvard. His first project was a study of the effects of life at altitude on blood oxygenation, as he believed this could be of practical benefit to copper miners in Chile. He travelled with a small group of people to the Chilean Andes and gradually acclimatized them to an altitude of 22,000 feet. The food ration for paratroopers was called K-rations (K for Keys) during the project. In watertight boxes he had food with a physiological calorific value of 3,200 kcal in total packed as a daily ration, which was distributed over breakfast, lunch and dinner. The box contained meat or cheese, biscuits, a bar of chocolate and sweets, coffee, lemons or soup powder, chewing gum, toilet paper and cigarettes. 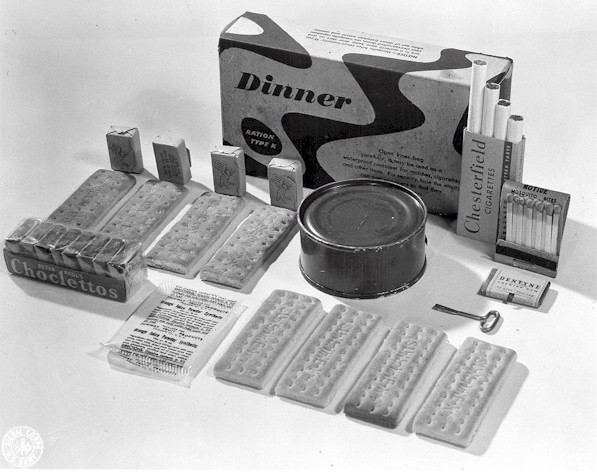 An example of a K-ration dinner. All the components were intended to fit into a box which would fit into a soldier’s pocket

In 1939, he was asked by the United States Department of War to develop and test a food ration for paratroopers. At that time, he was head of the Laboratory of Physiological Hygiene at the University of Minnesota, where he also conducted his studies on human nutrition, which were to extend over the next decades. As millions of people suffered the consequences of a disrupted food supply during the Second World War, Keys began a research project called the Minnesota Starvation Experiment. He closely monitored the effects of massive malnutrition on the human body and then compared different predefined nutritional interventions to restore the health of the emaciated test subjects. He found the test subjects in Civilian Public Service workcamps among conscientious objectors, especially members of free churches, who did not want to fight but were nevertheless willing to put their health at risk for science. The men involved were fed only root vegetables, brown bread and simple starchy foods for three months, were subjected to semi-starvation, targeted malnutrition, while they had to walk an average of 22 miles (35 km) per week. The results were published in 1950 in the form of a book entitled Biology of Human Starvation, which is still considered authoritative today in the early 21st century. In the course of the experiment, most participants lost about 25% of their weight and many suffered from anaemia, fatigue, apathy, extreme weakness, irritability, neurological deficits and oedema of the lower extremities Even though the war finished before the results of the studies could be published, Keys completed a publication of his two-volume 1385-page Biology of Human Starvation, which still today in the beginning of the 21st century is regarded as decisive.

In the meantime, Keys’ interest in diet and cardio-vascular disease (CVD) was triggered and Keys began to postulate a correlation between cholesterol levels and CVD and initiated a study of Minnesota businessmen. In 1951 Keys and his family took a sabbatical to Oxford. In this context, an Italian colleague claimed that heart disease would not occur in Italy, to which Keys initially reacted sceptically and set up a laboratory in Naples with his wife Margaret. Here he soon verified the low incidence of heart disease among Neapolitans and found that they had very low serum cholesterol levels. Keys hypothesized that a Mediterranean-style diet low in animal fat protected against heart disease. Keys and his wife then travelled to several European and African countries to measure the cholesterol levels of the population: Gradually, a pattern emerged suggesting that a diet rich in saturated fats increases serum cholesterol levels, which Keys regarded as a major cause of coronary heart disease. The results of what later became known as the Seven Countries Study appeared to show that serum cholesterol was strongly related to coronary heart disease mortality both at the population and at the individual level. Then, in the 1950s representatives of the American Heart Association appeared on television to inform people that a diet which included large amounts of butter, lard, eggs, and beef would lead to coronary heart disease.

However, the results of the study are viewed very critically. Although he had collected data from 22 countries, he limited his publication to seven of these countries. If all countries are included in the comparison, there is no positive correlation between the proportion of animal fats in the diet and the incidence of heart disease. The raw data of the study, which were kept under lock and key for a long time, even suggest an exact reverse correlation. The study is therefore now regarded as a large-scale fraud. The increased incidence of heart disease in the 20th century in the western world is today mainly explained by other factors, such as increased sugar consumption.

The Mediterranean Diet and the Seven Countries Study

In 1951 Keys took a sabbatical with his family at Oxford. In this context, an Italian colleague claimed that heart disease would not occur in Italy, to which Keys initially reacted sceptically and set up a laboratory in Naples with his wife Margaret. Here he soon verified the low incidence of heart disease among Neapolitans and also found that they had very low serum cholesterol levels. Keys and his wife then traveled to several European and African countries to measure the cholesterol levels of the population: Little by little, a pattern emerged that suggested that a diet rich in saturated fat would increase serum cholesterol levels, which Keys considered to be a major cause of coronary heart disease. When Keys first presented his ideas of diet-related heart disease to the World Health Organization in 1955 in an international setting, he was met with skepticism. Sir George Pickering demanded further evidence from Keys, who felt humiliated when he could not provide it. He therefore spent the next 15 years designing, implementing and analysing his Seven Countries Study: From 1958 onwards, Keys commissioned studies in seven countries over a period of 15 years, which seemed to demonstrate a correlation between the proportion of animal fats in the diet and the incidence of coronary artery disease. The study was conducted on 12,000 healthy middle-aged men in Italy, the Greek islands, Yugoslavia, the Netherlands, Finland, Japan and the United States and was published in 1980 by Harvard Press in the form of a book. It was instrumental in making the so-called Mediterranean Diet, rich in fruit and vegetables, bread and olive oil with fish and dairy products, popular as a supposed prevention against heart disease. However, the increased incidence of heart disease in the 20th century in the western world can also be explained by other factors, such as increased sugar and white bread consumption and lack of exercise.

Keys developed the Keys equation, which predicts the effect of saturated and polyunsaturated fatty acids in the diet on serum cholesterol levels. Keys found that saturated fats increase total and LDL cholesterol twice as much as polyunsaturated fats lower them.  In an article published in 1972, Keys coined the term body mass index (BMI) after the corresponding calculations had already been carried out by Adolphe Quetelet around 1832; Keys, however, assumed that the index should be applied to entire populations as a statistical means. With his wife, a biochemist, Keys wrote the books Eat Well and Stay Well and How to Eat Well and Stay Well the Mediterranean Way. Ancel Keys died on November 20, 2004, two months before his 101st birthday.