You are here: Home › medical science › John Caius and the English Sweating Sickness 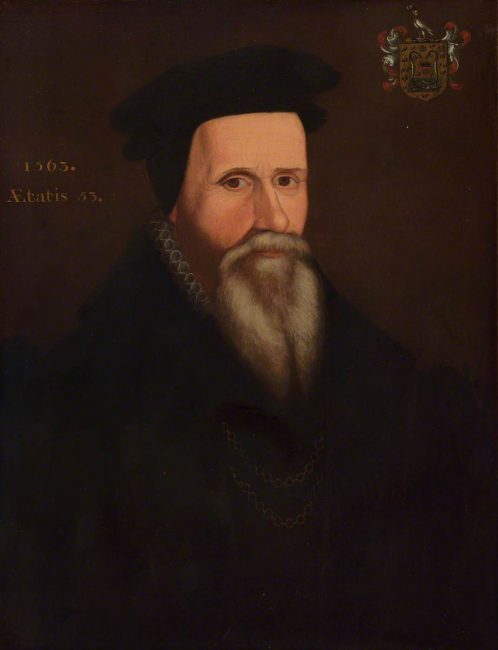 On July 29, 1573, English physician John Caius passed away. Caius was one of the founders of the present Gonville and Caius College, Cambridge. His classic account of the English sweating sickness is considered one of the earliest histories of an epidemic.

Studying under Montanus and Vesalius

John Caius was born in Norwich and was educated at Norwich School. John Caius attended Gonville Hall, Cambridge, where he seems to have mainly studied divinity. After graduating Magister Artium he traveled to Italy where he studied under the celebrated Johannes Baptista Montanus and Andreas Vesalius at Padua.[5] He earned his degree as a physician at the University of Padua in 1541. He became a physician and was admitted as a fellow of the College of Physicians, of which he was for many years president. Then he visited Germany from 1543, his friend Conrad Gessner in Zurich, stayed in France and returned to England in 1545.[6]

Caius became physician to Edward VI, Queen Mary and Queen Elizabeth.[8] He was then dismissed on account of his adherence to the Roman Catholic faith. He was incongruously accused both of atheism, and of keeping secretly a collection of ornaments and vestments for Roman Catholic use. The latter were found and burned in the College court.

In 1557 Caius, at that time physician to Queen Mary, enlarged the foundation of his old college, changed the name from “Gonville Hall” to “Gonville and Caius College,” and endowed it with several considerable estates, adding an entire new court at the expense of £1,834. He accepted the mastership of the college 24 January 1559 on the death of Thomas Bacon, and held it until about a month before his own death.

The Sweating Sickness was a mysterious and highly contagious disease that struck England, and later continental Europe, in a series of epidemics beginning in 1485. The last outbreak occurred in 1551, after which the disease apparently vanished. The onset of symptoms was dramatic and sudden, death often occurring within hours. Although its cause remains unknown, it has been suggested that an unknown species of hantavirus was responsible for the outbreak.

It is believed that the sweating sickness first came to the attention of physicians at the beginning of the reign of Henry VII in 1485. It was regarded as being quite distinct from the Black Death, the pestilential fever or other epidemics previously known, not only by the special symptom that gave it its name, but also by its extremely rapid and fatal course. In 1507, a second, less widespread outbreak occurred, followed in 1517 by a third and much more severe epidemic, when it also spread to Calais. In 1528, the disease reached epidemic proportions for the fourth time and with great severity. It first broke out in London at the end of May and speedily spread over the whole of England, save for the far north. The disease suddenly appeared in Hamburg, spreading so rapidly that, in a few weeks, more than a thousand people died. It continued to spread throughout central Europe and later also reached Denmark, Sweden, and Norway. The last major outbreak of the disease occurred in England in 1551. John Caius wrote an eyewitness account of the disease at this time called A Boke or Counseill Against the Disease Commonly Called the Sweate, or Sweatyng Sicknesse.

Caius was also a pioneer naturalist, prepared to make his own observations about nature rather than simply relying on accepted authorities. He was ready to make journeys about the country to see and record unusual animals. As such he could be considered also a pioneer of zoology, not yet recognized as a separate science. His last literary production was the History of Cambridge University, Historia Cantabrigiensis Academiae (London, 1574).

What was the Sweating Sickness, The Anne Boleyn Files and Tudor Society @youtube [9]