You are here: Home › medical science › Andreas Vesalius and the Science of Anatomy 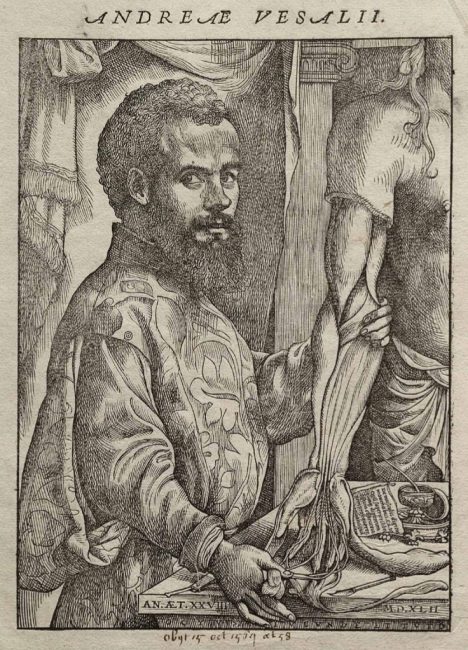 On December 31, 1514, Brabantian (in modern-day Belgium) anatomist, physician Andreas Vesalius was born. Vesalius is often referred to as the founder of modern human anatomy. He is best known as author of one of the most influential books on human anatomy, De humani corporis fabrica (On the Fabric of the Human Body).

“I could have done nothing more worthwhile than to give a new description of the whole human body, of which nobody understood the anatomy, while Galen, despite his extensive writings, has offered very little on the subject.”
— Andreas Vesalius, Letter on the China Root

Medical Science in the Middle Ages

During the 16th century, it is assumed that Europeans had only little understanding of the human anatomy. Only a handful of universities taught this subject and most often read the works of the Greek physician Galenus of Pergamon.[3] During his lifetime, Galenus combined philosophical works of Aristotle with his medicinal findings. His works were translated numerous times and often, the content was changed during translation, or comments and different interpretations were added to his works. It is also believed that Galenus’ emphasis on observing the body instead of just relying on authorities was lost during these ‘translations’. [1]

Andreas Vesalius came from an old family from Wesel (the name Vesal still reminds of that), who emigrated early. His father was a Habsburg personal pharmacist at the imperial court of Charles V in Flanders. Vesalius attended school in Brussels, and from 1530 studied ancient languages and sciences at the University of Leuven, where he received his humanistic education. In 1531 he changed to medicine. Vesalius went to Paris in 1533 to study galenic medicine and anatomy with Miguel Serveto under Jacques Dubois (Jacobus Sylvius) and Johann Winter. However, he was disappointed by Sylvius’ strict adherence to Galenus and by the unrealistic education at the university and left Paris in 1536 because of the Third War of emperor Charles V against Francis I of France.

It is assumed that Andreas Vesalius studied medicine at the University of Louvain and the University of Paris. He also understood, that it was essential to analyze real human bodies in order to be able to fully understand them. [2] Vesalius, a former defender of Galenus’ teachings, began to notice that Galenus was wrong in many things. For instance, he noticed that the human breastbone is made of three segments while Galenus said seven. Further mistakes were noticed while studying Galenus’ works and Vesalius was trying to understand their origin. He started dissecting animals while reading Galenus’ works more carefully and he came to realize that apparently, Galenus most probably never dissected the body of a human being, as this was strictly forbidden by the Catholic Church. [1]

The Anatomy of the Human Body

Vesalius performed several dissections, regardless of the strict law by the church. Next to the mistakes found in Galenus’ works, Vesalius also noticed, that contrary to the biblical story of Adam and Eve, men and women had the same amount of ribs. His book ‘De Humani Commis Fabrica Libri Septem’ consisting of his findings is considered very influential and contains more than 200 anatomical illustrations. It is considered the first known precise presentation of human anatomy and was published in seven volumes. [2] This work was part of his teaching activities at Padua and Bologna. Vesalius wanted to show his students how wrong Galenus’ writings were and also rigged up skeletons of humans to show them in the classroom. Vesalius made an important step in the history of science, in which researchers trusted only their own observations. It became clear that humans were just a species among many with just a few unique traits. [1] 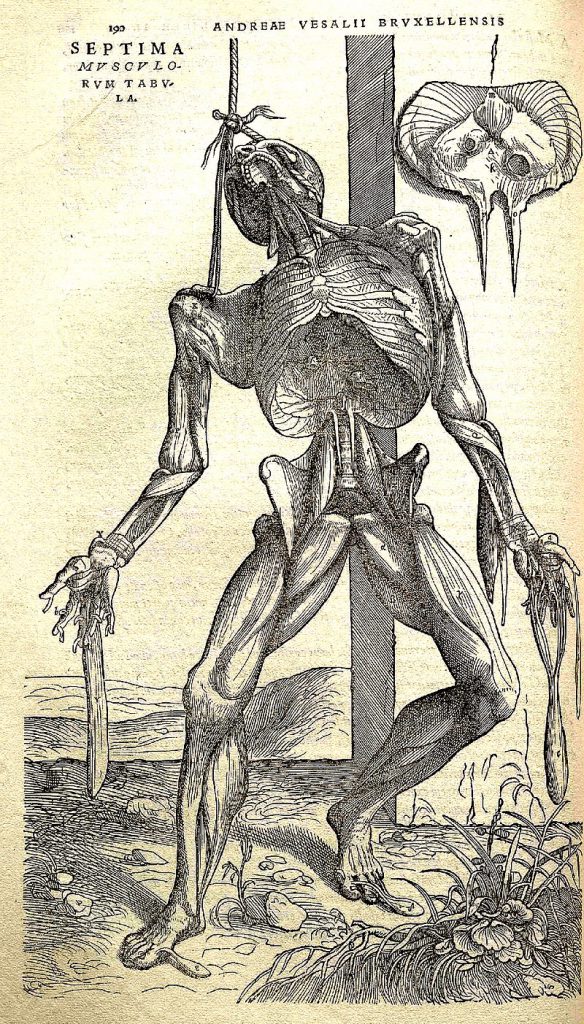 In Leuven Vesalius was able to carry out his first public corpse opening (section) in 1537 thanks to good relations with the authorities. At the beginning of 1537 Vesalius published his first philosophical work, the Paraphrasis ad nonum librum Rhazae, a study of the theories and methods of the Persian physician Rhazes (Abu Bakr Muhammad ibn Zakariya ar-Razi), who had lived from about 860 to 925, as a candidate of medicine (a degree comparable to a Master’s degree) in Brussels. He then went to Northern Italy. He received his doctorate on 3 December 1537; the following day he was appointed professor of surgery and anatomy in Padua. So he taught the next years in Padua. Later he went to Venice, where he had visited in 1537 and operated there in an excellent way on pleuritis patients. In recognition of his outstanding knowledge, Vesalius received a five-year contract from the Venetian Senate as a professor of surgery, with teaching duties in anatomy. Around 1542, Vesalius performed ventilation via a tube inserted into the trachea. This first documented endotracheal intubation, however, was only performed in animal experiments and received no further attention.

In 1544 Vesalius traveled to Pisa, after he had committed himself to Charles V as a personal physician, and held a public section there. He was also offered a teaching post at the University of Pisa, but Emperor Charles V refused to accept his appointment. Vesalius moved to Brussels and continued to write. In 1546 he published a treatise on the root of China and married in the same year. Finally, in 1564, he undertook a pilgrimage to the Holy Land, from which he never returned: During the return journey from Jerusalem he fell ill and had to go ashore. He died in Zante. He is said to have been buried by pilgrims.

Legends of this early death connected Vesalius with the Inquisition. One year after his death became known, Hubertus Languetus wrote to the doctor Caspar Peucer that Vesalius had accidentally dissected a person alive and that he had been punished to travel to Jerusalem.

“I have done my best to this single end, to aid as many as possible in a very recondite as well as laborious matter, and truly and completely to describe the structure of the human body which is formed not of ten or twelve parts– as it may seem to the spectator– but of some thousands of different parts.”
— Andreas Vesalius,  De humani corporis fabrica (15343)