You are here: Home › physics › Charles H. Townes and the Invention of the Maser 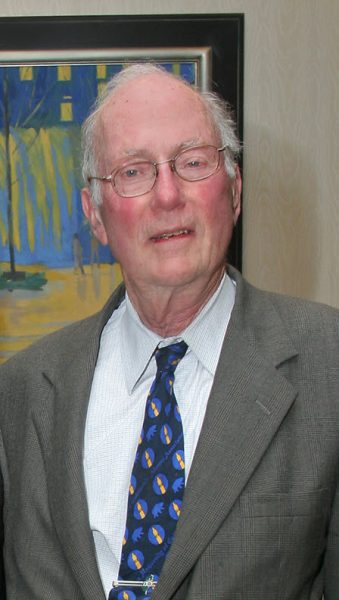 On July 28, 1915, American physicist and Nobel Laureate Charles Hard Townes was born. Townes was known for his work concerning the theory and application of the maser, for which he obtained the fundamental patent, and other work in quantum electronics associated with both maser and laser devices.

“I feel that very rarely have I done any work in my life. I have a good time. I’m exploring. I’m playing a game, solving puzzles, and having fun, and for some reason people have been willing to pay me for it. Officially, I was supposed to retire years ago, but retire from what? Why stop having a good time?”
– as quoted in Charles Townes, Inventor of the Laser, Nobel Laureate, Believer (2015)

Charles H. Townes was born in Greenville, South Carolina, the son of Henry Keith Townes, an attorney, and Ellen Sumter Townes. As a youth he was interested in the biological and natural sciences. Townes entered Furman University in his hometown at age 16 and became interested in physics.[3] He earned his B.S. in Physics and B.A. in Modern Languages at Furman University, graduating summa cum laude in 1935, at the age of 19. Physics had fascinated him since his first course in the subject during his sophomore year in college.[1] Consequently, Townes completed work for the Master of Arts degree in Physics at Duke University during 1937 with a masters thesis on van der Graaf generators, and then began graduate school at the California Institute of Technology, from which he received a Ph.D. degree during 1939 with a thesis on isotope separation and nuclear spins.

During World War II he worked on radar bombing systems at Bell Telephone Laboratories in designing radar bombing systems and has a number of patents in related technology. From this he turned his attention to applying the microwave technique of wartime radar research to spectroscopy, which he foresaw as providing a powerful new tool for the study of the structure of atoms and molecules and as a potential new basis for controlling electromagnetic waves.[1] The area that interested Townes the most was the use of microwaves (low frequency radiation) to investigate the structure of matter.[3] Townes was appointed Professor during 1950 at Columbia University, where he continued research in microwave physics, particularly studying the interactions between microwaves and molecules, and using microwave spectra for the study of the structure of molecules, atoms, and nuclei. He served as Executive Director of the Columbia Radiation Laboratory from 1950 to 1952.

During 1951 he conceived a new way to create intense, precise beams of coherent radiation for which he invented the acronym maser (for Microwave Amplification by Stimulated Emission of Radiation). This phenomenon, which had been known to physicists since at least 1917 when Albert Einstein showed its existence, is one through which atoms under the influence of an applied electromagnetic field emit photons.[3,6] In early 1954, the first amplification and generation of electromagnetic waves by stimulated emission were obtained together with H. J. Zeiger and James P. Gordon.[1] Townes’ essential contribution was to identify and create conditions in which large numbers of atoms were in an unstable high-energy state in which they would emit more energy than they absorbed.[4] When the same principle was applied to higher frequencies the term laser was used (the word light substituting for the word microwave). With the collaboration of A. L. Schawlow, Townes described the conditions necessary for the operation of masers in different wavelength regions—namely, the infrared, visible, and ultraviolet portions of the spectrum. Such devices were known as optical masers, and the first one was built in 1960 by Theodore H. Maiman.[3,7]

Further Development of the Maser

During 1953, Townes, James P. Gordon, and H. J. Zeiger built the first ammonia maser at Columbia University. This device used stimulated emission in a stream of energized ammonia molecules to produce amplification of microwaves at a frequency of about 24.0 gigahertz From 1959 to 1961, he was on leave of absence from Columbia University to serve as Vice President and Director of Research of the Institute for Defense Analyses in Washington, D.C., a nonprofit organization which advised the U.S. government and was operated by eleven universities Between 1961 and 1967 Townes served as both Provost and Professor of Physics at the Massachusetts Institute of Technology. Then, during 1967, he was appointed as a Professor of Physics at the University of California at Berkeley, where he remained for almost 50 years. Between 1966 and 1970, he was chairman of the NASA Science Advisory Committee for the Apollo lunar landing program.

For his creation of the maser, Townes along with Nikolay Basov and Alexander Prokhorov received the 1964 Nobel Prize in Physics [2]. Townes also developed the use of masers and lasers for astronomy, was part of a team that first discovered complex molecules in space, and determined the mass of the supermassive black hole at the centre of the Milky Way galaxy. Townes’ accomplishments in science were always guided by strong religious feelings. His landmark 1966 article in IBM’s Think magazine, “The Convergence of Science and Religion,” attempted to reconcile the sometimes-warring camps. To Townes, science was the pursuit of understanding about the order of the universe, religion the pursuit of understanding and acceptance of the meaning of the universe.[4]

Besides more than 125 scientific papers, he wrote “Microwave Spectroscopy” (1955, with Dr. Schawlow) and two memoirs, “Making Waves” (1995) and “How the Laser Happened: Adventures of a Scientist” (2002). President Ronald Reagan awarded him the National Medal of Science in 1982, and in 2005 he received the Templeton Prize for contributions to spiritual understanding.[5] Charles H. Townes died on January 27, 2015, at age 99.