You are here: Home › engineering › The Volkswagen Beetle – It’s Ugly But It Gets You There 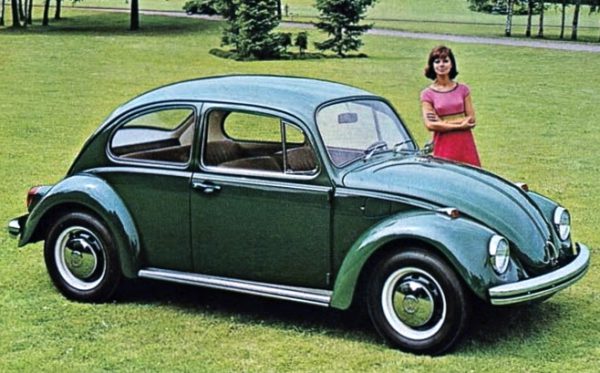 On July 30, 2003, the very last Volkswagen Beetle was produced, manufactured in Puebla, Mexico. With 21,529,464 produced from 1938 to 2003, the Beetle is the longest-running and most-manufactured car of a single platform ever made. Currently, German automobile industry and especially Volkswagen worldwide is in the focus of public attention due to manipulations of the emission control system on their Diesel cars. Potentially, the famous Volkswagen Beetle had produced much more dangerous emissions during its more than 60 years of production time, but times were different by then, and significant measures for environment protection came into effect much later.

In the late 1920s, the German auto industry was still largely composed of luxury models, and the average German could rarely afford anything more than a motorcycle. As a result, only one German out of 50 owned a car. Seeking a potential new market, some car makers began independent “people’s car” projects. The trend was not new, as Béla Barényi [6] is credited with having conceived the basic design in the mid-1920s. Barényi also made numerous crash protection inventions, and is therefore regarded as the father of passive safety in automotive design. Josef Ganz developed the Standard Superior (going as far as advertising it as the “German Volkswagen”) and presented it at the IAMA (Internationale Auto- und Motorradausstellung) in Berlin in February 1933. It featured a tubular chassis, a mid-mounted engine, and independent wheel suspension with swing-axles at the rear. Here the new Chancellor Adolf Hitler expressed interest in its design and low selling price of 1,590 ℛℳ. Under the new anti-Semitic government, however, Josef Ganz was a target for his enemies from the automotive industry. In Germany, the company Hanomag mass-produced the 2/10 PS “Kommissbrot“, a small, cheap rear engined car, from 1925 to 1928.

Ferdinand Porsche, a well-known designer for high-end vehicles and race cars, had been trying for years to get a manufacturer interested in a small car suitable for a family. In 1906 Porsche joined the car manufacturer Austro-Daimler as their chief designer, where he successfully advanced to managing director in 1916, when the Vienna University of Technology awarded him an honorary doctorate for his achievements as an engineer. In 1923, he joined the German Daimler Motoren Gesellschaft (later Mercedes-Benz after the Fusion with Benz) as Technical Director in Stuttgart, where he came up with several very successful race car designs. In 1930, Porsche opened his own engineering design firm in Stuttgart.[1]

Model of the 1932 Porsche Type 12, Nuremberg Museum of Industrial Culture

The Order to Develop a “Volkswagen”

In April 1934, Adolf Hitler gave the order to Ferdinand Porsche to develop a Volkswagen. At a meeting at Berlin’s Kaiserhof Hotel, Chancellor Hitler insisted on a basic vehicle that could transport two adults and three children at 100 km/h (62 mph) while not using more than 7 litres of fuel per 100 km. Everything had to be designed to ensure parts could be quickly and inexpensively exchanged. The “People’s Car” would be available to citizens of Nazi Germany through a savings scheme, or Sparkarte (savings booklet), at 990 Reichsmark, about the price of a small motorcycle.

Initially designated Type 60 by Porsche, the design team included Erwin Komenda and Karl Rabe. In October 1935, the first two Type 60 prototypes, known as the V1 and V2 (V for Versuchswagen, or “test car”), were ready. In 1936, testing began of three further V3 prototypes, built in Porsche’s Stuttgart shop. A batch of thirty W30 development models, produced for Porsche by Daimler-Benz, underwent 2,900,000 km of further testing in 1937. All cars had the distinctive round shape and the air-cooled, rear-mounted engine. Included in this batch was a rollback soft top called the Cabrio Limousine. The car was designed to be as simple as possible mechanically. The air-cooled 19 kW 995 ccm motors’ built-in oil cooler and flat-four engine configuration’s superior performance was also effective for the German Afrika Korps in Africa’s desert heat. 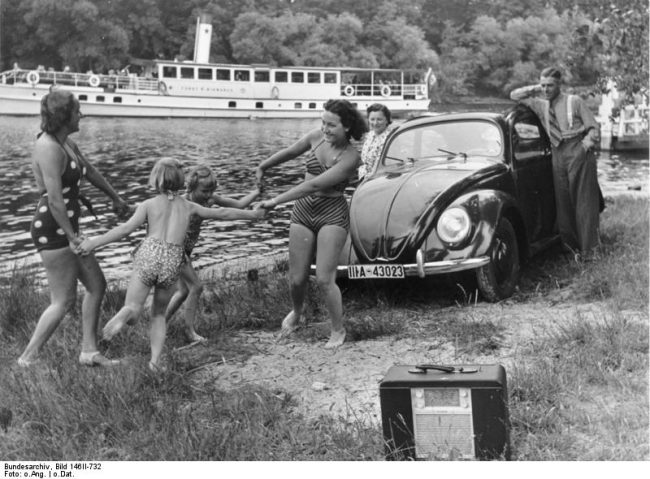 KdF Propaganda: “A family playing by a river with a KdF-Wagen and radio receiver”

On 26 May 1938, Hitler laid the cornerstone for the Volkswagen factory in Fallersleben. He gave a speech, in which he named the car Kraft-durch-Freude-Wagen (“Strength Through Joy Car”, usually abbreviated to KdF-Wagen). The name refers to Kraft durch Freude (‘Strength Through Joy’), the official leisure organization of Nazi Germany. The model village of Stadt des KdF-Wagens was created near Fallersleben in Lower Saxony in 1938 for the benefit of the workers at the newly built factory. The first Beetles were produced on a small scale in 1941. Mass production of civilian VW cars did not start until post-war occupation. The Volkswagen factory was handed over by the Americans to British control in 1945; it was to be dismantled and shipped to Britain. Thankfully for Volkswagen, no British car manufacturer was interested in the factory; an official report included the phrases “the vehicle does not meet the fundamental technical requirement of a motor-car… it is quite unattractive to the average buyer… To build the car commercially would be a completely uneconomic enterprise.” Knowing Germany needed jobs and the British Army needed vehicles, British Army officier Ivan Hirst persuaded the British military to order 20,000 cars, and by March 1946 the factory was producing 1,000 cars a month under the name Volkswagen Type 1.

Postwar Period and the Road to Success

During the post-war period, the Volkswagen Beetle had superior performance in its category with a top speed of 115 km/h (71 mph) and 0–100 km/h (0–62 mph) in 27.5 seconds with fuel consumption of 6.7 l/100 km (36 mpg) for the standard 25 kW engine. This was far superior to the Citroën 2CV,[5] which was aimed at a low speed/poor road rural peasant market, and Morris Minor, designed for a market with no motorways or freeways; it was even competitive with more advanced small city cars like the Austin Mini. On 17 February 1972, when Volkswagen Beetle No. 15,007,034 was produced, Beetle production surpassed that of the previous record holder, the Ford Model T.[5] By 1973, total production was over 16 million, and by 23 June 1992, over 21 million had been produced.

Competitors and the Rabbit

As the 1960s came to a close, Volkswagen faced increasingly stiff competition from European cars as well. The Volkswagen Beetle was faced with competition from new designs like the Fiat 127 and Renault 5. Volkswagen’s attempts to boost the power of their air-cooled motor to meet the demands of higher highway speeds in the late 1960s, then comply with new pollution control regulations, caused problems for reliability and fuel efficiency that impaired the reputation of the aging design. The over-reliance on a single model, now in decline, meant that Volkswagen was in financial crisis by 1974. It needed German government funding to produce the Beetle’s replacement. Production lines at Wolfsburg switched to the new water-cooled, front-engined, front-wheel drive Golf designed by Giorgetto Giugiaro in 1974, sold in North America at the time as the “Rabbit”. The Golf would eventually become Volkswagen’s most successful model since the Beetle. In 1978, mainstream production shifted to Brazil and Mexico: markets where low operating cost was an important factor. However, this shift in production did not completely end sales of the Beetle in Europe.