You are here: Home › biology › George Stapledon and Grassland Science 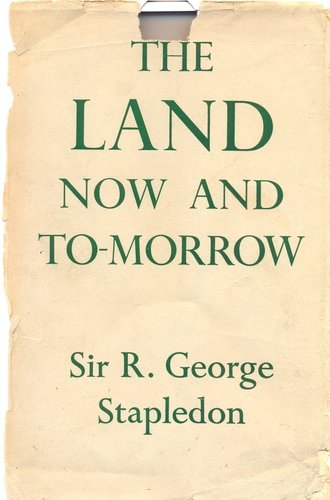 On September 22, 1882, English grassland scientist and pioneer environmentalist Sir Reginald George Stapledon was born. Stapledon worked to compensate for the land use changes of the 20th century, after the collapse of rural mining industries of 18th and 19th centuries and resultant depopulation.

Reginald George Stapledon was born at Lakenham, Northam, near Bideford, Devon, UK, the sixth of the seven children of shipping agent William Stapledon and Mary Clibbert. A family tradition linked them with Walter de Stapeldon (1261-1326), Bishop of Exeter and founder of Exeter College, Oxford.[3] Educated at United Services College, Westward Ho!, and entering Emmanuel College, Cambridge, in October 1901, where he took the natural science tripos of geology, chemistry and botany in June 1904, he worked in Suez for the family firm between 1904 and 1906 before giving up the commercial life.

Grasslands at the Heart of Agriculture

Developing a strong support for the idea of agricultural autarky, he returned to the University of Cambridge in 1907 to study biology and in 1910 joined the Royal Agricultural College where he came to argue that grasslands were at the heart of successful agriculture, which in turn was at the heart of Britain’s economic and spiritual well-being. He moved to University College of Wales in 1912. Here he headed up a newly created Department of Botany. Between 1914 and 1918 he worked for the Board of Agriculture and Fisheries in London and succeeded in getting them to set up a seed testing station, where he attempted to devise techniques for separating weed seeds from commercial seeds.[2]

His longest service however was as director of a plant breeding station in Aberystwyth. It was in the Plant Breeding Station between 1919 and 1942, in association with committed colleagues of his own choosing, that Stapledon accomplished his life’s major work — work which enormously influenced the art, science and indeed the principles of grassland management throughout the world.[4] The Plant Breeding Station had been set up using a £10,000 grant from Sir Laurence Philipps, who contributed a further £1000 for the first ten years of the institute’s existence. Stapledon came to love the natural beauty of Wales and indeed argued that anybody who interfered with the ‘shapely outline’ of the Cambrian Mountains should be treated as a criminal. Following an ecological approach he developed a number of new varieties of grass, oats and clover, known as ‘S’ strains, and increased awareness of the importance of grasslands in agriculture, particularly in New Zealand where his work was especially influential.

He had visited the country in 1926 during a bout of ill health and whilst there made a strong impression on Bruce Levy who followed much of Stapledon’s work. Stepledon’s work was recognised in 1939 when he was elected a Fellow of the Royal Society and knighted. His work on grasslands continued during the Second World War when he took up the directorship of the grassland research station at Drayton, Stratford upon Avon in 1942, whilst he was also a founder member and first President of the British Grassland Society. Around this time he became a strong advocate of ley farming, feeling that it would help to feed Britain during the conflict. He also persuaded the government to set up a grassland research station at Hurley, Berkshire before his retirement in 1946. On the basis of Stapledon’s improvements, the government established the Grassland Research Station at Hurley, Berkshire.[2]

The Land: Now and Tomorrow

As well as producing a number of scientific papers Stapledon also produced a number of works that were more political in tone, notably The Land: Now and Tomorrow (1935), The Way of the Land (1943), and Disraeli and the New Age (1943). In these he developed his idea of renewing society by making farming the central part of economic life.

Given the low-levels of pensions for government science workers he was forced to return to work in 1947, accepting the position of Science Adviser to the Messrs Dunn’s Farm Seeds company in Salisbury. His work was interrupted in 1952 by major surgery and he spent the rest of his life in severe ill health. George Stapledon died on September 1960, aged 77. Without doubt, in his time Stapledon was the most eminent agricultural scientist in the world as well as the foremost authority on grassland . Under his inspired leadership, the Welsh Plant Breeding Station at Aberystwyth became the most prestigious research establishment in Britain and abroad for grassland and plant breeding studies.[4]

How to green the world’s deserts and reverse climate change | Allan Savory, [6]