You are here: Home › botany › Johann Hedwig – the Father of Bryology 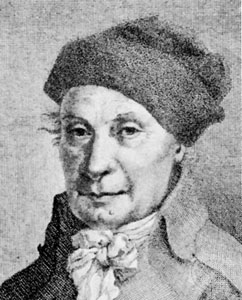 On December 8, 1730, German botanist Johann Hedwig was born. Hedwig is notable for his studies of mosses for which he is sometimes called the father of bryology, in particular the observation of sexual reproduction in the cryptogams. He dealt with the anatomy, fertilization, and reproduction of mosses and introduced a new method of classification based on the distribution of spores (reproductive bodies). Hedwig was the first to recognize the true organs of reproduction in mosses. He demonstrated the close relationship between mosses and liverworts.

Johann Hedwig was born as the son of the shoemaker Jakob Hedwig in Brașov (Kronstadt) in Transylvania, where he attended elementary school and from 1744 the upper secondary school of the Honterus School. Hedwig worked his way up out of great poverty. He spent most of his life in Leipzig, where he studied medicine at the University of Leipzig after studying in Vienna and attending grammar schools in Bratislava and Zittau from 1751 onwards, where he was awarded a doctorate in 1759. He then practiced as a physician for the next twenty years, during which time he pursued botany as a hobby, collecting in the morning before work and then studying his accumulation in the evening. He also acquired a microscope and a small library.

Since Hedwig was not allowed to practice in Transylvania with the Leipzig degree, he worked as a general practitioner in Chemnitz, where he also conducted botanical research. 1781 he moved to Leipzig, where he worked as a doctor at the city hospital from 1783 or 1784. In 1786 he became Associate Professor of Medicine, 1789 Full Professor of Botany and Director of the Botanical Garden of the University of Leipzig. In April, 1788 he was elected a Fellow of the Royal Society. In 1790, he was elected a foreign member of the Royal Swedish Academy of Sciences. In 1792 he was elected a member of the Leopoldina academy of sciences.

In his spare time he explored the botanical environment of Chemnitz. Since he soon had identified the phanerogams that were found there, he turned to the rich moss flora of the city. He was the first botanist to use the microscope to study a particular group of plants, in this case mosses. Among other things, he had contact with Johann Christian von Schreber, who was professor of botany at the University of Erlangen, and who even gave the amateur botanist Hedwig a microscope. He had a Rheinthaler microscope with only 50x linear magnification. Later he also used 170- to 290-fold magnifications. 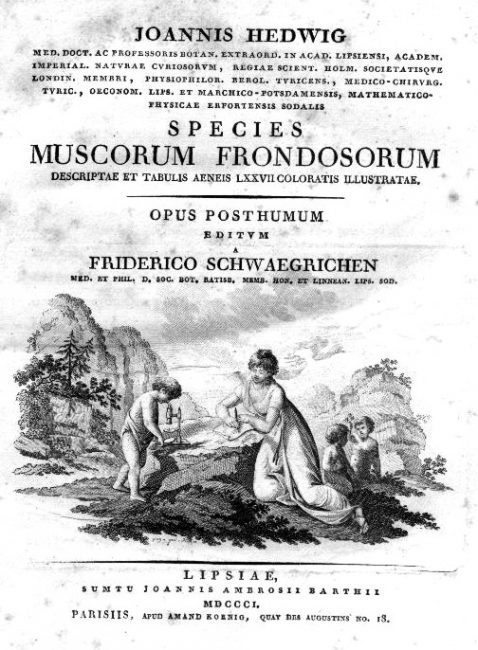 The True Genitals of Mosses

In his moss investigations, Hedwig was also under Linné‘s powerful influence,[5] as he sought to prove that the mosses did not lack the dual genitals on which Linné had founded his system of plants. Although Hedwig carried out investigations of the mosses as a “secondary plant”, he did so precisely and conscientiously. Hedwig did not publish hastily, because although he had made his fundamental discovery in 1774, he controlled his observations for several years and only published a preliminary display of his observations “of the true genitals of mosses and their reproduction by seed” in the “Collections of Physics and Natural History” in 1779. Hedwig’s discoveries initially met with opposition and envy in science. To the extent that his enemies and enviousness were silenced, his followers and admirers multiplied.

During Hedwig’s lifetime, Erhart named a moss genus Hedwigia. The Journal for Cryptogamology and Phytopathology, founded in 1852 by Dr. Rabenhorst, was also called Hedwigia. In our time, this magazine is continued under the name “Nova Hedwigia“. From 1786 onwards, Hedwig worked at the University of Leipzig as an associate professor of botany and from 1789 onwards as a professor of the Botanical Garden, he was regarded as a skilled microscopist and good draughtsman. His Herbarium, admired by Goethe in 1797, was auctioned off in 1810, but it was largely acquired from the Botanical Garden of Geneva, where the collection is still located today.[6]

Hedwig’s greatest achievement is the discovery of the antheridia and archegonia of the leafy moss, which he correctly interpreted as reproductive organs, which was disputed in 1818 by the famous botanist Christian Konrad Sprengel, for example. Hedwig studied the systematics of mosses, but also investigated fungi, lichens, ferns and higher plants. Hedwig was convinced that there had to be sexual reproduction with the corresponding organs, even in the case of fungi. In his search for sexual structures, he discovered the regular eight-porticity of different Asci, which led to the fact that he named a genus Octospora. The term spore as an alternative to the term “semen” of flowering plants is as much a product of Hedwig as the term sporangium.

Through his major works Fundamentum historiae naturalis muscorum (1792), in which he depicted the reproduction of mosses, and Species Muscorum, which was published posthumously in 1801 by Christian Friedrich Schwägrichen and is regarded as the beginning of the nomenclature of mosses, Hedwig made a decisive contribution to the understanding of mosses and their still largely unexplained life cycle.