You are here: Home › history › Joseph Needham and the History of China 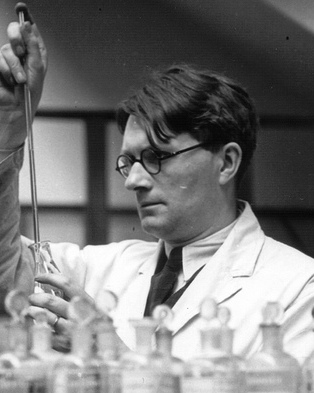 On December 9, 1900, British historian and sinologist Joseph Needham was born. Needham is best known for his scientific research and writing on the history of Chinese science and technology. He wrote and edited the landmark history Science and Civilisation in China, a remarkable multivolume study of nearly every branch of Chinese medicine, science, and technology over some 25 centuries.

Joseph Needham was the only child of a London family. His father was a doctor, and his mother, Alicia Adelaïde, née Montgomery (1863–1945), was a music composer from Oldcastle, Co. Meath, Ireland. Needham was educated at Oundle School before attending Gonville and Caius College, Cambridge. There he received his Bachelors degree in 1921, his Oxbridge MA in 1925 and a DPhil in the same year. Needham was then elected to a fellowship at Gonville and Caius College and worked at Frederick Gowland Hopkins‘s laboratory laboratory at the University Department of Biochemistry.[4] There he specialized in embryology and morphogenesis. In 1931, he published a three volume work titled Chemical Embryology. It included a history of embryology from Egyptian times up to the early 19th century. Further important works was also Needham’s Terry Lecture of 1936 published as Order and Life.

Around that period, Chinese scientists came to Cambridge in order to study. Needham was taught Chinese by one of these scientists, Lu Gwei-djen, which ignited Needham’s enthusiasm for China’s culture and scientific advances. Needham pursued the study of Classical Chinese privately with Gustav Haloun. During the early 1940s, Joseph Needham became the director of the Sino-British Science Co-operation Office in Chongqing. Needham was able to travel through war-torn China visiting numerous educational institutions, obtaining for them much needed supplies. During every trip, Needham collected historical and scientific books which he sent back to Britain. These books became the foundation of Needham’s later research. He found evidence that a number of technical achievements – book printing, the compass, gunpowder, suspension bridges and even toilet paper – had been known in China long before they were widespread in the West. His first book was published in 1945: Chinese Science.

Science and Civilisation in China

During the late 1940s, Needham started to devote his time to the history of Chinese science until his retirement in 1990, even though he continued to teach some biochemistry until 1966. In 1948, Josheph Needham proposed a project to the Cambridge University Press for a book on Science and Civilisation in China. Within only weeks of being accepted, it had grown to seven volumes, and it has expanded ever since. During the first three years, the scientists compiled a list of every mechanical invention and abstract idea that had been made and conceived in China. These included cast iron, the ploughshare, the stirrup, gunpowder, printing, the magnetic compass and clockwork escapements, most of which were thought at the time to be western inventions. The first volume eventually appeared in 1954 and became a large success. However, Needham’s book series is not undisputed. In particular his critics claim that he often exaggerated the importance of Chinese inventions.

During his studies, Joseph Needham began to ask the question

“Why did modern science, the mathematization of hypotheses about Nature, with all its implications for advanced technology, take its meteoric rise only in the West at the time of Galileo [but] had not developed in Chinese civilisation or Indian civilisation?”.

It became known as “Needham’s Grand Question” or as “The Needham Question”. Needham’s works attribute significant weight to the impact of Confucianism and Taoism on the pace of Chinese scientific discovery, and emphasises the “diffusionist” approach of Chinese science as opposed to a perceived independent inventiveness in the western world. Needham eventually suggested that “A continuing general and scientific progress manifested itself in traditional Chinese society but this was violently overtaken by the exponential growth of modern science after the Renaissance in Europe. China was homeostatic, but never stagnant.”

Several scientists attempted to explain the Needham Question. For instance, Yingqui Liu and Chunjiang Liu argued that the issue rested on the lack of property rights and that those rights were only obtainable through favour of the emperor. Justin Lin suggested that China did not make the shift from an experience-based technological invention process to an experiment-based innovation process. The experience-based process depended on the size of a population, and while new technologies have come about through the trials and errors of the peasants and artisans, experiment-based processes surpasses experience-based processes in yielding new technology. Progress from experimentation following the logic of a scientific method can occur at a much faster rate because the inventor can perform many trials during the same production period under a controlled environment. Results from experimentation is dependent on the stock of scientific knowledge while results from experience-based processes is tied directly to the size of a population. Therefore experiment-based innovation processes have a higher likelihood of producing better technology as human capital grows.

China had about twice the population of Europe until the 13th Century and so had a higher probability of creating new technologies. After the 14th Century, China’s population grew exponentially, but progress in innovation saw diminishing returns. Europe had a smaller population but began to integrate science and technology that arose from the scientific revolution in the 17th Century. This scientific revolution gave Europe a comparative advantage in developing technology in modern times. Further, according to Lin, the Chinese did not have the incentives to acquire human capital necessary for modern scientific experimentation. Civil service was deemed the most rewarding and honourable work in pre-modern China. The gifted had more incentives to pursue this route to move up the social status ladder as opposed to pursuing scientific endeavours.

However, there was also criticism on Needham’s work on China. For instance, Andre Gunder Frank argued that Needham could not break free from his preconceived notions of European exceptionalism and criticized him for his Eurocentric assumptions. T. H. Barrett on the other hand argued that Needham was critical of Buddhism he criticized Needham’s favoritism and uncritical evaluation of Taoism in Chinese technological history. Needham’s political views were unorthodox and his lifestyle controversial. His left-wing stance was based in an idiosyncratic form of Christian socialism and after 1949 his sympathy with Chinese culture was extended to the new government. In 1965, with Derek Bryan, a retired diplomat whom he first met in China, Needham established the Society for Anglo-Chinese Understanding, which for some years provided the only way for the British to visit the People’s Republic of China. On a visit to China in 1964 he was met by Zhou Enlai, but on a visit in 1972 he was deeply depressed by the changes under the Cultural Revolution.

For his contribution to science, Joseph Needham was awarded the George Sarton Medal by the History of Science Society. he also became Master of Gonville and Caius College. In 1984, Needham became the fourth recipient of the J.D. Bernal Award, awarded by the Society for Social Studies of Science. Six years later he was awarded the Fukuoka Asian Culture Prize by Fukuoka City.

Joseph Nedham suffered from Parkinson’s disease from 1982 and died on 24 March 1995 in Cambridge at age 94.