You are here: Home › psychology › Eleanor J. Gibson and the Visual Cliff Phenomenon 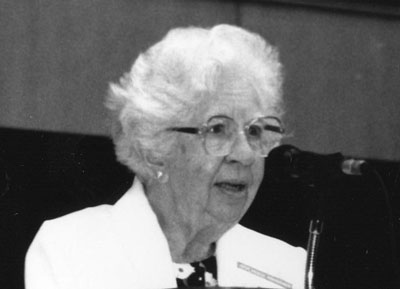 On December 7, 1910, American psychologist Eleanor Jack Gibson was born. Gibson focused on reading development and perceptual learning in infants and toddlers. In the 1960s and 1970s Gibson, with her husband James J. Gibson, created the Gibsonian ecological theory of development which emphasized how important perception was because it allows humans to adapt to their environments. Perhaps her most well-known contribution to psychology was the “visual cliff“, which studied depth perception and visual or motor impairments in both human and animal species.

Eleanor J. Gibson was born in Peoria, Illinois on December 7, 1910. Actually, much of her early life is unknown. She earned her B.A. degree in 1931 and her M.S. degree in 1933 from Smith College in Massachusetts. She excelled in scientific subjects and chose to study psychology, no doubt encouraged by such eminent teachers as Kurt Koffka,[4] Fritz Heider, and James Gibson, who would later become her husband.[5] Next, she continued as a post graduate student in Yale University, where she obtained her PhD in 1938. Eleanor Gibson’s early career was hampered by many factors. Firstly, she began in the period of the Great Depression. It was particularly difficult for women to progress under theese conditions. Gender discrimination was still the norm, and Robert Yerkes initially rejected her for postgraduate studies at Yale on this basis.[5,9]

After finishing her education, Gibson taught at Smith College. However, after her husband was drafted by the Air Force, Eleanor and their children accompanied him to Texas and later to California where Eleanor mainly was a homemaker. She later went back to Smith College and then left with her family for Cornell University where in 1949 Gibson became an unpaid research associate. There, she created the ‘Visual Cliff‘ together with Richard Walk, professor at Cornell.

It was at Cornell, where Gibson developed her theory of avoidance learning , based on studies of children. In 1955, Gibson’s first theory of perceptual learning, which was formulated in collaboration with her husband, appeared. In a joint study they explored the perception of nonsense scribbles to clarify this concept of perceptual learning. The participants were tasked to identify one standard scribble from a set of similar scribbles varying in many different dimensions. At first the standard scribble was imperceptible from the other scribbles but after repeated tests the standard scribble became clear. The participants were tested until the standard was identified correctly without any correction given. The Gibson’s then stated that the stimulus held all the information for perception rather than the participants learning to perceive through an associative process. This resulted in perceptual learning as being redefined as a change in what was perceived by an observer became more sensitive to the different aspects of a stimulus. Two years later, they again published the results of joint research, on invariants under transformation. These papers later formed the basis for James Gibson’s ecological theory.[5]

Back then, Eleanor Gibson conducted a study on infant-mother olfactory role in bonding in goats. She washed one of them right after birth before the mother had the chance to lick it. While she had just finished washing one, its twin emerged from the mother. This led Gibson to quickly put the kid on a high camera stand nearby. She was surprised when the infant stood on the ledge and didn’t fall off. Gibson discovered the visual cliff and started doing further research on perceptual learning. Gibson then came up with a study researching the depth perception of rats. She and Richard Walk started to construct an artificial cliff. It was a sheet of plexiglass that was covered by cloth with a checkerboard pattern which was held above the ground with clamps and rods. One side of the cloth was placed just beneath the glass and on the other side the cloth was placed 4 feet below. They then watched what side the rats descended to. To Gibson’s amazement the dark-reared rats acted the same way as rats reared in the light and avoided the deep side. Gibson then tested lambs, goats, chickens, dogs, pigs, monkeys and newborn children on a larger apparatus which led to the same results. The performed tests by Eleanor Gibson and Richard Walk led to the assumption that perception of depth was innate in many species but not all. Kittens that were raised in the dark would walk indiscriminately on both sides of the visual cliff, therefore learning from the environment had to occur.

In 1975 Gibson was able to establish her own infant study laboratory. This enabled her to devote her research to ecological psychology, perhaps even more so after her husband’s death in 1979.[5] Gibson’s major published work is possibly An Odyssey in Learning and Perception, (1991), which consolidates much of her lifetime’s work. She also wrote Principles of Perceptual Learning and Development, in 1967, for which she received the Century Award. Gibson retired in 1980 and is Professor Emeritus at Cornell University. In 1977, she was elected a fellow of the American Academy of Arts and Sciences. In 1992, Gibson was awarded the National Medal of Science, the highest scientific honor in the United States.