You are here: Home › astronomy › Johann Daniel Titius and the Titius-Bode Law 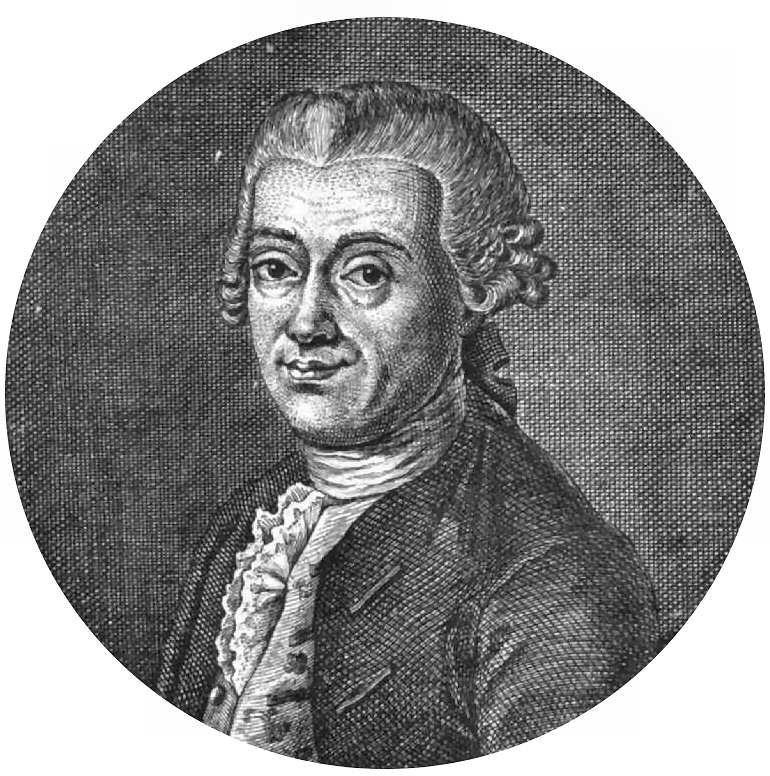 On January 2, 1729, German astronomer Johann Daniel Titius was born. He is best known for formulating the Titius–Bode law, a hypothesis that the bodies in some orbital systems, including the Sun’s, orbit at semi-major axes in a function of planetary sequence. The formula suggests that, extending outward, each planet would be approximately twice as far from the Sun as the one before. The hypothesis correctly anticipated the orbits of Ceres and Uranus, but failed as a predictor of Neptune’s orbit and has since been discredited further.

Johann Daniel Titius was born in Konitz, Prussia, today Chojnice in Poland, as Johann Daniel Tietz and latinized his surname to Titius when he became a university professor. Initially he attended the school of his hometown. After the early death of his father, Titius was educated by his uncle Michael Christoph Hanow, who was a professor in Gdansk, and attended the grammar school there. After attending the Gymnasium in Gdansk, he began studying at the University of Leipzig, where in 1752 he obtained a master’s degree with a master’s thesis on moonlight and was accepted as a private lecturer at the philosophical faculty.

In 1756 he took over the professorship of lower mathematics at the University of Wittenberg and in 1761 took over the public lectures on physics for Georg Matthias Bose, who was absent from Wittenberg. Since Bose did not return, Titius was appointed professor of physics by the Polish king and Saxon electors. He also taught philosophy, natural theology and natural law. In 1768 he became rector of the university. He rejected offers of professorships in Göttingen, Helmstedt, Kiel and Gdansk.

The first known mention of a series approximating Bode’s Law is found in David Gregory‘s The Elements of Astronomy, published in 1715. In it, he says, “…supposing the distance of the Earth from the Sun to be divided into ten equal Parts, of these the distance of Mercury will be about four, of Venus seven, of Mars fifteen, of Jupiter fifty two, and that of Saturn ninety five.” In 1772, the only 25-year-old Johann Elert Bode completed the second edition of his astronomical compendium Anleitung zur Kenntniss des gestirnten Himmels “Manual for Knowing the Starry Sky”, into which he added further remarks to Titius’ ideas [1].

Fits and Misfits of Titius-Bode’s Law

When originally published, the law was approximately satisfied by all the known planets — Mercury through Saturn — with a gap between the fourth and fifth planets. It was regarded as interesting, but of no great importance until the discovery of Uranus in 1781 which happens to fit neatly into the series. Based on this discovery, Bode urged a search for a fifth planet. Ceres, the largest object in the asteroid belt, was found at Bode’s predicted position in 1801 [2]. Bode’s law was then widely accepted until Neptune was discovered in 1846 and found not to satisfy Bode’s law. Simultaneously, the large number of known asteroids in the belt resulted in Ceres no longer being considered a planet at that time. Bode’s law was discussed as an example of fallacious reasoning by the astronomer and logician Charles Sanders Peirce in 1898 [3]. The discovery of Pluto in 1930 confounded the issue still further. While nowhere near its position as predicted by Bode’s law, it was roughly at the position the law had predicted for Neptune. However, the subsequent discovery of the Kuiper belt, and in particular of the object Eris, which is more massive than Pluto yet does not fit Bode’s law, have further discredited the formula.

The Titius-Bode Law can be understood as a combination of orbital resonance and shortage of degrees of freedom: any stable planetary system has a high probability of satisfying a Titius–Bode-type relationship. Since it may simply be a mathematical coincidence rather than a “law of nature”, it is sometimes referred to as a rule instead of “law”. However, astrophysicist Alan Boss states that it is just a coincidence, and the planetary science journal Icarus no longer accepts papers attempting to provide improved versions of the law. Orbital resonance from major orbiting bodies creates regions around the Sun that are free of long-term stable orbits. Results from simulations of planetary formation support the idea that a randomly chosen stable planetary system will likely satisfy a Titius–Bode law. Dubrulle and Graner have shown that power-law distance rules can be a consequence of collapsing-cloud models of planetary systems possessing two symmetries: rotational invariance and scale invariance, the latter being a feature of many phenomena considered to play a role in planetary formation, such as turbulence.

As a physicist, Titius was a supporter of René Descartes and stressed the role of experimentation, but was also interested in economic applications.[7] He was particularly interested in thermometers. In biology he followed Carl von Linné.[8] he standard author abbreviation Titius is used to indicate this person as the author when citing a botanical name. He published scientific journals and promoted reprints of the Philosophical Transactions of the Royal Society. Titius also wrote in just one year (1753-1754) a complete German translation of Michel de Montaigne‘s Essays. His translations of Montaigne and the Discours sur les sciences et les arts by Jean-Jacques Rousseau were inspired by Johann Christoph Gottsched. He wrote theological and philosophical essays in the sense of the Natural Religion of the Enlightenment and historical works.

Johan Daniel Titius died on 16 December 1796, at age 67, in Wittenberg, Electorate of Saxony.