You are here: Home › engineering › George Ferris and the Invention of the Ferris Wheel 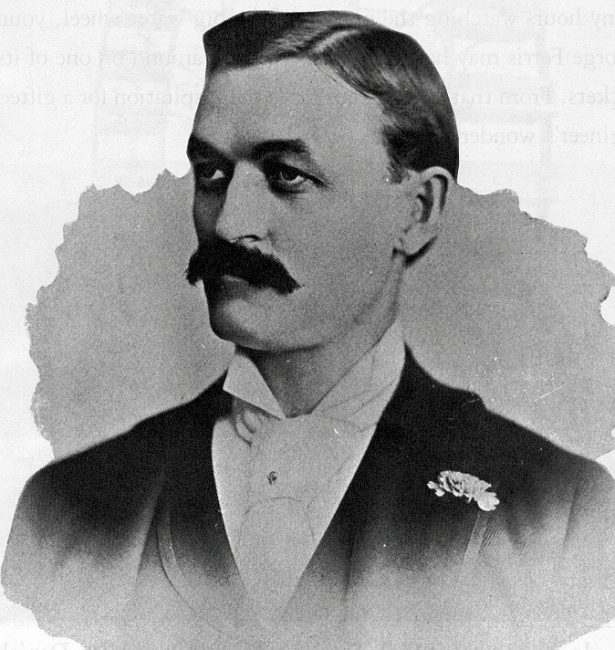 On November 22, 1898, American engineer George Ferris passed away. He is mostly known for creating the original Ferris Wheel for the 1893 Chicago World’s Columbian Exposition, created to rival the Eiffel Tower.

George Ferris was born in Carson City, Nevada, USA. His parents were George Washington Gale Ferris Sr. and Martha Edgerton Hyde Ferris. He had four sisters and two brothers. His grandfather Silvanus Ferris and Reverend George W. Gale had founded his birthplace. When his family wanted to move to California in 1864, civil war and inflation caused money to run out on the road and they settled in Carson City, Nevada. Here George helped his father on the farm until 1873 when he moved to the California Military Academy in Oakland. After graduating (1876), he moved to Rensselaer Polytechnic Institute in Troy, New York, where he graduated as a civil engineer in February 1881.

From Railroad Design to Bridge Building

He began his career in a New York railroad design office under General James H. Ledlie, known from the Crater Battle. In 1882, he joined the Queen City Mining Company in West Virginia and, after its closure the following year, the Louisville Bridge & Iron Company in Louisville, Kentucky. He gained a reputation as an expert for large steel constructions and for his concrete work in compressed air chambers. For health reasons, he moved to the Kentucky and Indiana Bridge Company of Louisville in 1885 to inspect steel acquired in Pittsburgh. Together with his former student colleague James C. Hallsted, he founded his company G.W.G. Ferris & Company, Inspecting Engineers. He also founded Ferris, Kaufman and Company in 1890. His former fellow student Gustave Kaufman (1859-1913) from Pennsylvania, along with Frank C. Osborn (1857-1922) from Michigan, led the construction of the Cantilever Highway Bridge in Cincinnati across the Ohio River.

A Brief (Pre-)History of Pleasure Wheels

It is believed that during the 17th century, so called “Pleasure Wheels” whose passengers rode in chairs suspended from large wooden rings turned by strong men, may have originated in Bulgaria. Also Pietro Della Valle, a Roman traveller who sent letters from Constantinople, Persia, and India, attended a Ramadan festival in Constantinople during 1615 and described among fireworks, floats, and great swings also a “Great Wheel”. Also in England, similar wheels supposedly appeared and subsequently elsewhere around the world, including India, Romania, and Siberia. In 1892, William Somers installed three fifty-foot wooden wheels at Asbury Park, New Jersey and he was granted the first U.S. patent for a “Roundabout”.

For the 1893 World’s Fair in Chicago, Daniel Burnham was looking for an impressive example of the art of engineering that would outshine even the Eiffel Tower built for the 1889 World’s Fair in Paris. Ferris proposed “a kind of upright carousel” to give visitors an overview of the entire exhibition grounds from lofty heights, as was already the case in Paris. This is also the origin of the frequently used term “Observation Wheel”. The plan was rejected as unrealistic. However, G.W.G. Ferris was obsessed with the idea of building this Ferris wheel. Those responsible for the World Expo were concerned that the wheel would not withstand the stress and could collapse. After his studies, Ferris founded the company G.W.G. Ferris & Co. in Pittsburgh. This company was engaged in testing steel for track and bridge construction companies. Ferris spent $25,000 on plans and specifications. In the early summer of 1892, the contract for the construction of the Ferris Wheel was awarded and shortly afterwards withdrawn. On November 29, 1892, the construction was approved on condition that Ferris would finance it itself. Once again, he used his own money to place the orders for the construction. Financing proved difficult until he succeeded in attracting several investors for the project, including railroad magnates Andrew Onderdonk (1848-1905) and William Vincent. It is believed that George Washington Gale Ferris Jr. rode on Somers’ wheel in Atlantic City prior to designing his wheel for the World’s Columbian Exposition and Somers also filed a lawsuit against Ferris for patent infringement, however Ferris and his lawyers successfully argued that the Ferris Wheel and its technology differed greatly from Somers’ wheel, and the case was dismissed.

The famous Ferris Wheel by George Ferris rotated on a 71-ton, 45.5-foot axle comprising what was at that time the world’s largest hollow forging. It was manufactured in Pittsburgh by the Bethlehem Iron Company and weighed 89,320 pounds. In total, the Ferris Wheel included 36 passenger cars, each fitted with 40 revolving chairs and able to accommodate up to 60 people, giving a total capacity of 2,160. In 1893, the wheel was primed for a test run. The engine that would activate the wheel was fueled by steam boilers whose underground mains rushed steam to propel the pistons of its thousand-horsepower engines. Both Ferris and his associate W. F. Gronau also recognized the engineering marvel the wheel represented, as a giant wheel that would turn slowly and smoothly without structural failure had never before been attempted. For its inaugural run, no cars had yet been attached. The workmen however, climbed the structure and settled themselves on the spokes to the accompaniment of cheers from an audience of fair employees who had gathered to watch the momentous event.

The Ferris wheel was opened on June 21, 1893, seven weeks late, and became a special attraction at the World’s Fair. The cost was $250,000. With a fare of $0.50, a total revenue of about $725,000 was achieved. The following two years he had to fight for the proceeds against the exhibition managers and at the same time defend himself against patent suits. After he filed for bankruptcy and lost his company, his wife Margaret Ann left him a few months before his death in 1896. After the success at the World Expo, some smaller Ferris wheels were sold to amusement parks in the USA. However, these were not a commercial success for Ferris. He invested a lot of money in the development of larger wheels, but there were no buyers for them. On November 22, 1896, he died lonely and impoverished in a hospital in Pittsburgh at the age of only 37 years from typhoid fever.

In September 1893, the American James Graydon applied for a patent for a Ferris wheel, which was a copy of Ferris’ invention. The patent was bought by the British naval officer Walter Basset, who then had the first Ferris wheel in Europe built at Earls Court in London. On May 25, 1895, the Great Wheel was opened, further buildings followed in Blackpool (1896), in the Vienna Prater (1897) and finally in Paris (1900) on the occasion of the World’s Fair.