You are here: Home › architecture › The Vegetal Designs of Victor Horta, Pioneer of Art Nouveau 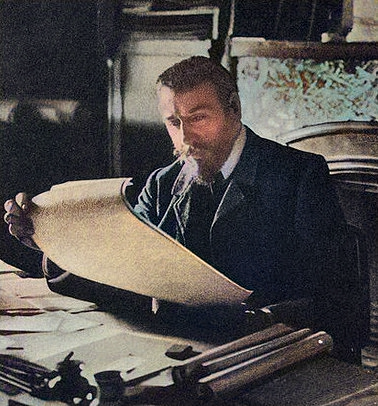 On January 6, 1861, Belgian architect and designer Victor Horta was born. Horta is one of the founders of the Art Nouveau movement. The curving stylized vegetal forms that Horta used influenced many others, including architect Hector Guimard, who used it in the first house he designed in Paris and in the entrances he designed for the Paris Metro. He is also considered a precursor of modern architecture for his open floor plans and his innovative use of iron, steel and glass.

Horta was born on 6 January 1861 in Ghent, Belgium. His father, Pierre Horta was a music-loving shoemaker and had a total of 12 children from two marriages. At Victor’s birth Pierre Horta was 66 years old. In his youth Victor Horta resisted the authoritarian upbringing of his mother, who urged him to study law or medicine. Horta became interested in art at an early age, especially in playing the violin. When Horta helped his uncle on a building site at the age of twelve, he first came into contact with the profession of architect. Horta first enrolled as a student at the Koninklijke Academie voor Schone Kunsten in Ghent in 1873 for the architecture department, but continued to attend classes at the Koninklijk Atheneum aan de Ottogracht in Ghent from 1874 to 1877.

He then left Ghent in 1878 and moved to Montmartre in Paris to become an interior designer, working in the studio of the interior designer Jules Debuysson. In Paris he was also inspired by the Impressionists and Pointillists and by the possibility of working with steel and glass. He later wrote in his memoirs: “My stay in Paris, my walks, my visits to monuments and museums awakened my artistic sensitivity. No school education could ever have so stimulated and made such a lasting impression on me as the ‘reading’ of monuments.”

When Horta’s father died in 1880 he returned to Belgium and moved to Brussels to study at the Academy of Fine Arts. In Brussels he made friends with Paul Hankar, who later turned to Art Nouveau. Horta was a good student and was appointed as his assistant by his professor, the royal architect Alphonse Balat. Together they designed the Royal Botanical Gardens in Laeken/Laken. This was the first time that Horta used glass and steel for his work.  In 1884 he received the Godecharle Prize for Architecture with a design for a Parliament building in Brussels. In 1885, Horta was already working independently, he designed three houses for the Twaalfkamerenstraat in Ghent, which were built in the same year. He then decided not to build homes for rich citizens and devoted himself to public tenders. In 1887, with a design for a natural history museum, he won the triennial prize awarded by the Academy of Fine Arts in Brussels for its former students. He concentrated on shaping his designs in the belief that his forms were highly practical and not an expression of artistic affectation. During this period, Horta made many contacts and joined the Freemasons. 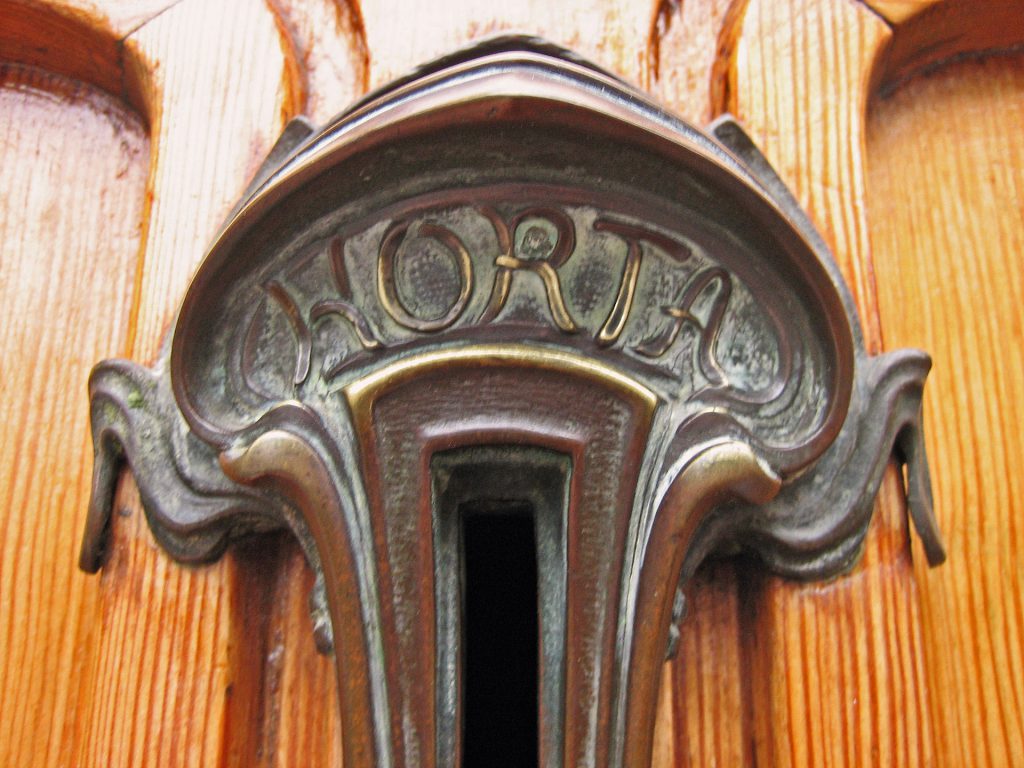 Detail of the door of the Horta Museum, photo: Purple, CC BY-SA 4.0, via Wikimedia Commons

In 1893 he started designing homes and businesses again. In 1892 the Hôtel Tassel was built, the interior of which is characterized by an exposed cast-iron structure and glass elements, as well as rich ornamentation consisting of organic forms and soft lines. Almost overnight, the 32-year-old architect became famous for this residential building. The building is widely recognized as the first appearance of Art Nouveau in architecture. The Hôtel Solvay , on Avenue Louise in Brussels, was constructed for Armand Solvay, the son of the Belgian chemist and industrialist Ernest Solvay.[1] Horta had a virtually unlimited budget, and used the most exotic materials in unusual combinations, such as marble, bronze and rare tropical woods in the stairway decoration. In 1893 Victor Horta built the Maison Autrique, followed by the Maison Winssinger in 1895/1896 and the Hôtel Eetvelde from 1895 to 1900, all of which Victor Horta designed as a total work of art in the Art Nouveau style. 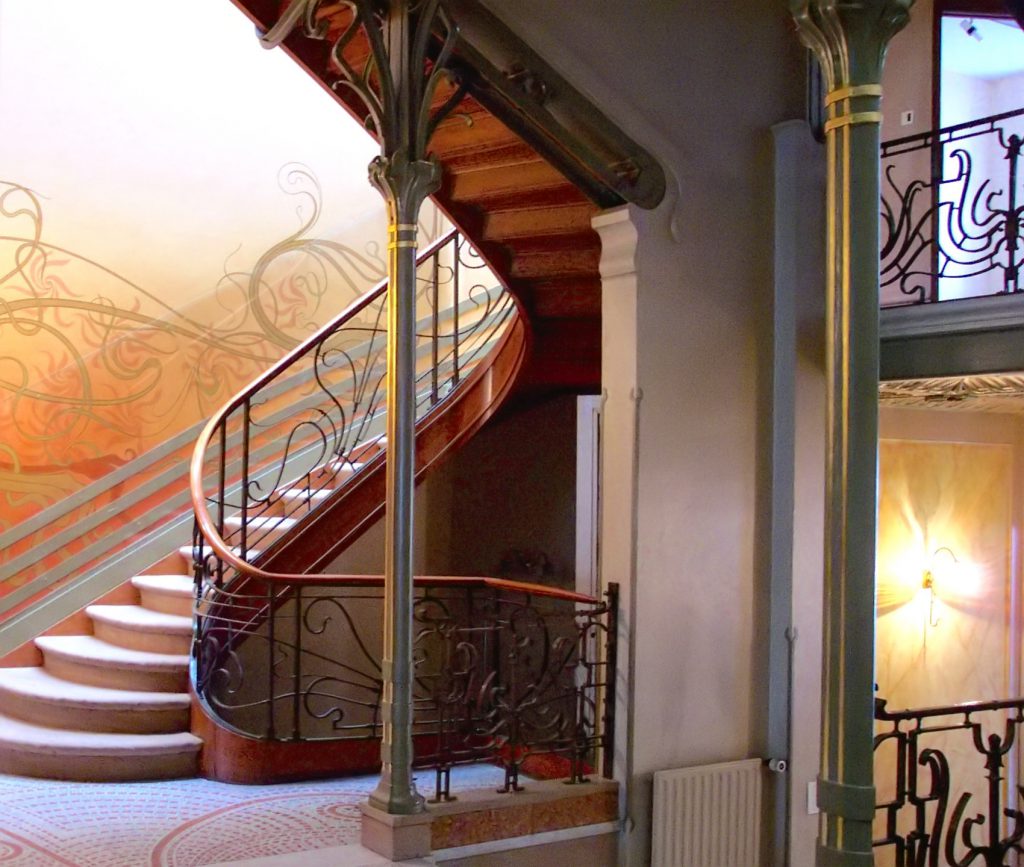 The Hôtel van Eetvelde is considered one of Horta’s most accomplished and innovative buildings, because of highly original Winter garden interior and the imaginative details throughout. The open floor plan of the Hôtel Van Eetvelde was particularly original, and offered an abundance of light, both horizontally and vertically, and a great sensation of space. A central court went up the height of the building, bringing light from the skylight above. On the main floor, the oval-shaped salons were open to the courtyard, and also received light from large bay windows. It was possible to look from one side of the building to other from any of the salons on the main floor.

From 1896 to 1899, Victor Horta designed the Maison du Peuple, the headquarters of the Belgian Socialist Party, whose façade – the first building in Brussels – he constructed entirely of iron and glass. 1900/1901 saw the construction of the À l’innovation department store, which Victor Horta also built in Art Nouveau style. His Waucquez department store, built in 1906, has been home to the Belgian National Museum of Comics, the Belgian Comic Strip Centre (BCZ), since 1988. The building seems to be a piece of pompous architecture, entirely geared to the effect that a temple of commerce should have on customers. But Horta’s mastery of achieving lighting effects through glass roof constructions is also evident here. In its design, Horta used all his skill with steel and glass to create dramatic open spaces and to give them an abundance of light from above. The steel and glass skylight is combined with decorative touches, such as neoclassical columns. The store closed in 1970, and, because of its connection to Horta, was declared a protected historical site. Now a museum of a particular Belgian speciality, the comic strip, it also has a room devoted to Horta.

From 1912 Victor Horta taught at the Academy of Fine Arts in Brussels, where he was its director from 1913 to 1915. In February 1915, as World War I was underway and Belgium was occupied, Horta moved to London. London and attended the Town Planning Conference on the Reconstruction of Belgium, organized by the International Garden Cities and Town Planning Association. Unable to return to Belgium, at the end of 1915 he traveled to the United States, where he gave a series of lectures at American universities, including Cornell, Harvard, MIT, Smith College, Wellesley College and Yale.

After Horta`s stay in London and the United States from 1916 to 1919, the post-war austerity meant that Art Nouveau was no longer affordable or fashionable. From this point on Horta, who had gradually been simplifying his style over the previous decade, no longer used organic forms, and instead based his designs on the geometrical. In 1927, Horta became the Director of the Académie Royale des Beaux-Arts in Brussels, a post he held for four years until 1931. Horta’s late work includes the Art Museum in Tournai, inaugurated in 1928, and Brussels Central Station, which was only completed after his death. Actually, Horta began working on drawings on the Brussels-Central railway station in 1910. He was formally commissioned as the architect in 1913, but work did not actually begin until after World War II, in 1952. Victor Horta died on 8 September 1947