You are here: Home › art › Giotto di Bondone – Making a Decisive Brake with the prevalent Style 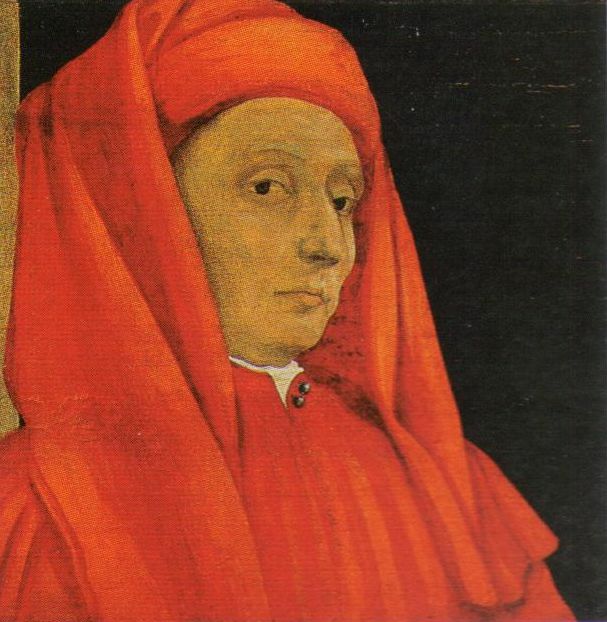 On January 8, 1337, Italian painter and architect Giotto di Bondone passed away. He is regarded as the decisive pioneer of the Italian Renaissance (Rinascimento).

Geniuses are Born as such

Sources indicate that Giotto grew up in Florence as the son of the blacksmith Bondone. Most experts believe that Giotto was his real name. Others think that it is a short form of Ambrogio (Ambrogiotto) or Angelo (Angiolotto). His life is attested to by the Commentarii (artist’s stories) by Lorenzo Ghiberti, written around 1450 and edited by Giorgio Vasari in the middle of the 16th century,[1] which made him generally known. It is said that Giotto grew up as a poor boy in Vespignano in the Mugello (near Florence) and was discovered by the painter Cimabue drawing his sheep on a stone while he was tending them. He drew so realistically that even experienced artists were amazed. These accounts are based on the idea of the Renaissance, according to which artistic geniuses are born as such. An artist’s anecdote says about Giotto that one day he painted a small fly on a work of art by his master Cimabue, which looked so deceptively real that Cimabue tried several times to chase it away before he realized the illusion. Cimabue is said to have thought that Giotto had surpassed him. The fly became a symbol of artistic progress.

In the Service of King and Pope

Giotto probably entered Cimabue’s workshop as an apprentice. Soon he received orders not only from Florence. Pope Benedict XI brought him to Rome in 1303, where he worked for over ten years; King Robert of Naples also took him into his service. He eventually became famous as an architect and sculptor, and was known as an aesthete and poet. The painter Cennino Cennini admired him in his writings on painting as a conqueror of the “maniera greca/byzantina” and praised his technical skills. The recognition of his contemporaries was also expressed in material success: Giotto was among his dignitaries, he owned properties in Florence and Rome. Giotto’s entire work deals with religious themes. He is considered “the real founder of Italian painting”, especially of Tuscan fresco painting.

However, the most important aspects of his work are the high naturalness and liveliness of his figures, as well as the preparation of the perspective. In this way he overcame the iconographic norms of Byzantine painting, which had influenced Western painters for generations. He initiated the development that eventually led to the realism typical of post-Gothic art in Italy (Rinascimento). Whereas conventional painting was characterized by two-dimensional figures that were arranged as symbols in front of a flat background decorated with symbols, Giotto placed plastically modeled individuals in a perspective space that maintained relationships with one another. By giving his figures width and drapery, he gave them natural volume and weight. 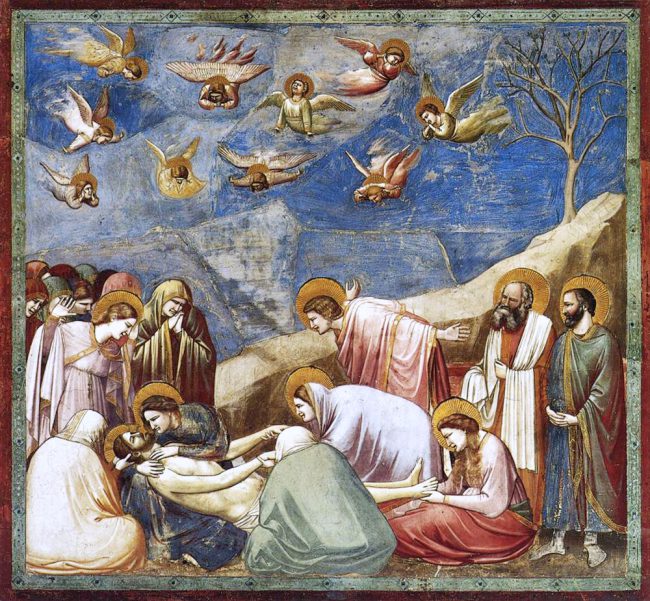 The Great Cycle of Frescoes

Giotto’s main work (and best preserved) is probably the great cycle of frescoes in the Cappella degli Scrovegni all’ Arena (Scrovegni Chapel) in Padua, consisting of more than 100 scenes from the life of Mary and the life of Jesus, especially the Passion, created between 1304 and 1306. Giotto also painted elements of architecture that simulate niches (trompe-l’œil) in which allegorical figures appear to be standing. Masaccio and Michelangelo were directly influenced by this.[5] A famous scene from this cycle is the Adoration of the Magi, in which a comet-like star floats in the sky (probably, next to the Bayeux carpet, one of the earliest depictions of Halley’s comet, which was visible to the naked eye a few years earlier).[6] It is also worth noting that before the time of Giotto’s fresco cycle in the Cappella degli Scrovegni in Padua, the sky was very rarely painted in blue and the color blue was used very sparsely at all. This is at least partly due to a lack of affordable blue pigments; ground lapis lazuli, which Giotto used for his fresco cycle, was incredibly expensive and came from “beyond the sea” (hence the name ultramarine). 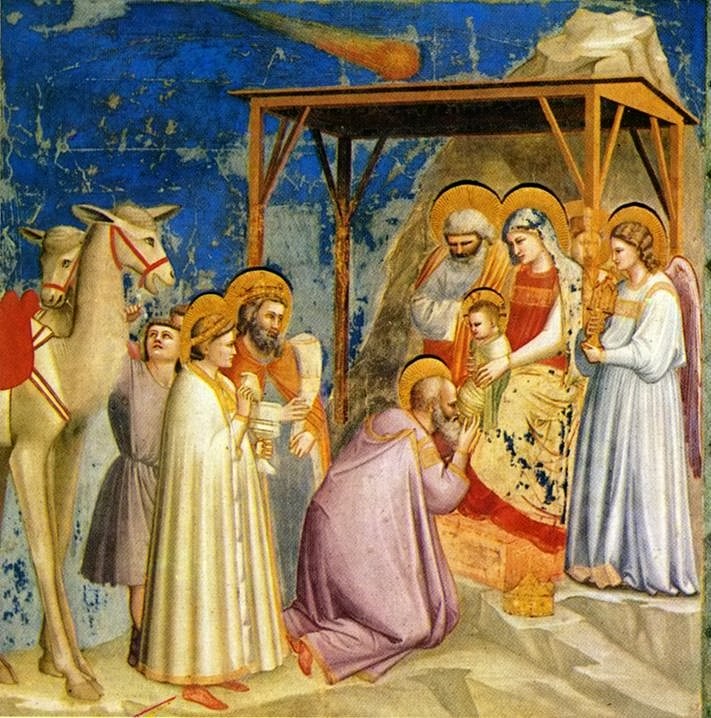 The Adoration of the Magi (circa 1305) by Giotto

After 1320 he returned to Florence, where he subsequently maintained an economically flourishing workshop. In 1334 he became chief master builder at the cathedral of Florence. Its Campanile bears his name, although his successors (he himself did not live to see its completion), such as Andrea Pisano, deviated considerably from his plans. In 1329, Giotto was called by King Robert of Anjou to Naples where he remained with a group of pupils until 1333. Few of his Neapolitan works have survived: a fragment of a fresco portraying the Lamentation of Christ in the church of Santa Chiara and the Illustrious Men that is painted on the windows of the Santa Barbara Chapel of Castel Nuovo, which are usually attributed to his pupils. In 1332, King Robert named him “first court painter”, with a yearly pension. Also in this time period, according to Vasari, Giotto composed a series on the Bible; scenes from the Book of Revelation were based on ideas by Dante. 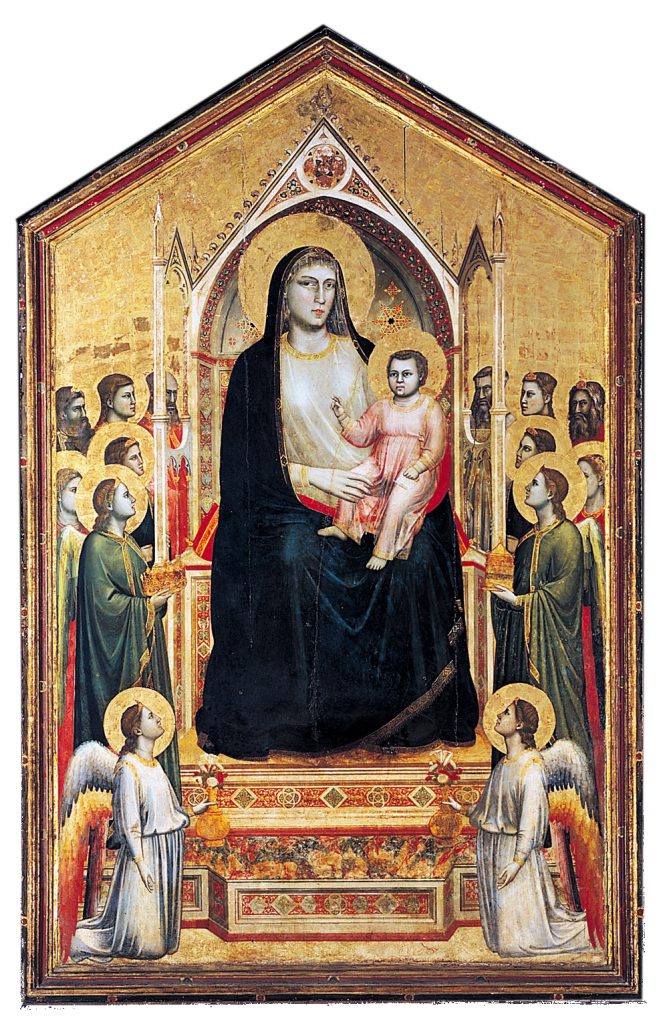 Giotto died on January 8, 1337 while working on a Last Judgement in the Bargello Chapel in Florence. He is also mentioned by Boccaccio [2] in the Decamerone (6th day, 5th story) and by Dante Alighieri [3] in the Divine Comedy; he was a friend of both. The poet Petrarch [4] possessed a virgin with Giotto’s child and expressed his conviction that every art connoisseur must be enraptured by her. Michelangelo was also inspired by Giotto’s “Assumption of Saint John” in Santa Croce in Florence, as a study by his hand shows.[5] Giotto’s achievement is unique in his time; it was only two generations later that artists of the early Renaissance such as Andrea Orcagna, Altichiero da Zevio or Masaccio were able to continue the development he had initiated. According to one of the many legends surrounding Giotto, he showed a Pope’s envoy, who wanted a sample of his work, nothing else but a circle drawn from free hand, which could not have been made better with the compass (“Giotto’s O”).