You are here: Home › aviation › Jean-Pierre Blanchard and the Balloonomania 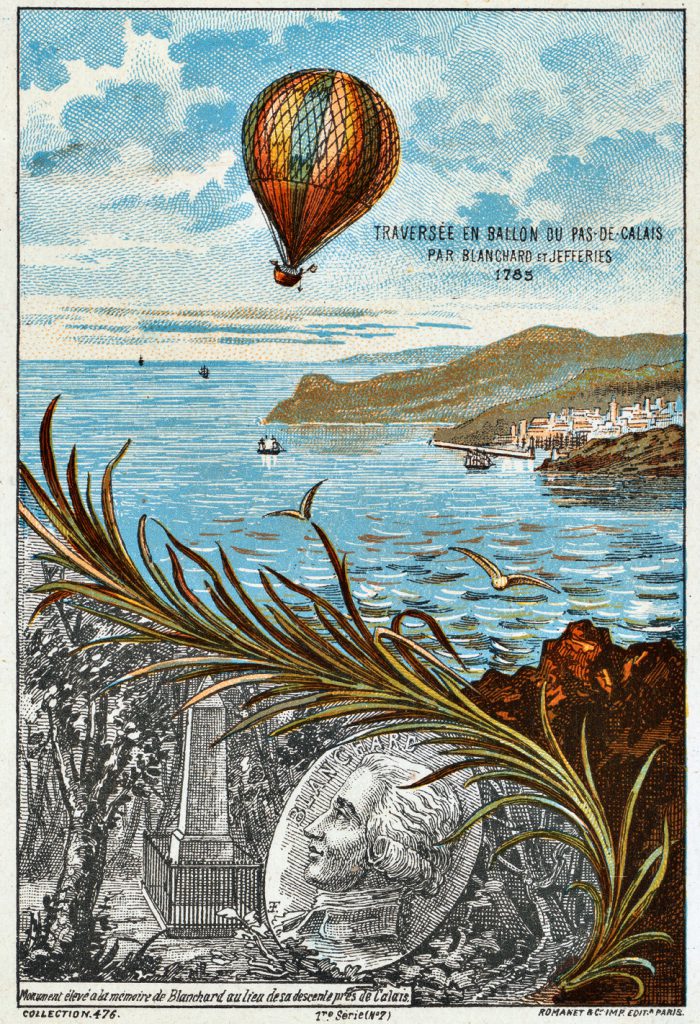 Crossing of the English Channel by Blanchard and Jeffries on 7 January 1785.

On January 7, 1785, French inventor, aviation pioneer and balloonist Jean-Pierre Blanchard crossed the English channel in a balloon flying from Dover Castle to Guînes for the first time. After the first balloon flights of the Montgolfier brothers a veritable “baloonomania” evolved with all manner of objects decorated with images of balloons or styled au ballon, from ceramics to fans and hats.

Just two years before, the two brothers and business partners, Joseph-Michel and Jacques-Étienne Montgolfier changed history when they presented their hot air balloon for the first time to the public of Annonay, France [1]. Blanchard’s first successful flight in a hydrogen gas balloon took place in 1784, when he launched a gas balloon from the Champ de Mars, the large greenspace located near the Eiffel Tower today. Unfortunately, his first flight went not as smooth as wished. A spectator was refused a place on board and suddenly slashed at the balloon’s mooring ropes and oars with his sword. The balloon was pushed by the wind across the Seine to Billancourt and back again, landing in the rue de Sèvres.

But the fascination of ballooning was not only limited to the Montgolfier brothers and Blanchard. A whole ‘balloonomania‘ evolved after the first successful flights and the public interest increased dramatically with all manner of objects decorated with images of balloons or styled au ballon, from ceramics to fans and hats and resulted in several artistic works like this poem by Peter Bell:

The balloonomania started to spread in France, but soon reached Great Britain as well. When Blanchard reached London in 1784, he took part in a flight with John Sheldon, but also intended to demonstrate his propulsion mechanism, which proved ineffective just another time. However, his balloon flights got better and spread the word around Europe. The American physician John Jeffries had the chance to fly with Blanchard in 1784. They flew from the Rhedarium behind Green Street Mayfair, London to Ingress in Kent. Another flight with Jeffries took place on January 7, 1785. This time, he crossed the English Channel from England to France flying from Dover Castle to Guînes in just a little more than two hours. The balloonists had to drop all ballast (except their underpants) and climb from the gondola into the holding ropes in order not to fall. An enthusiastic reception awaited them in Calais. Blanchard was made an honorary citizen of Calais and received a lifelong payment of 1200 livres a year from the French king Louis XVI. 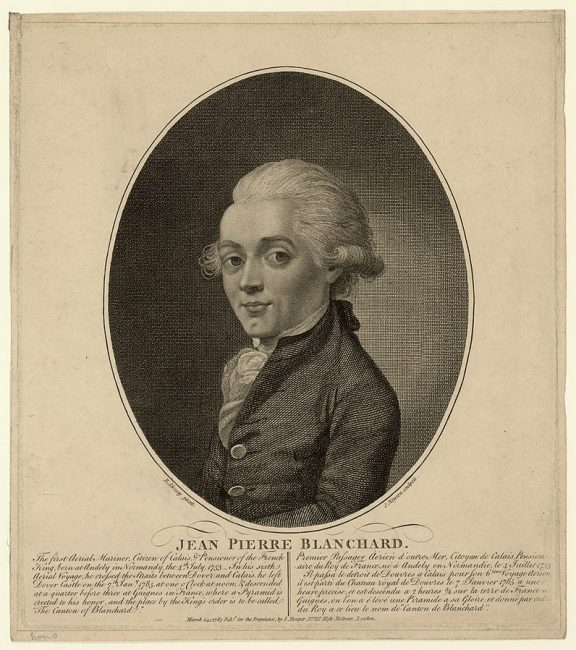 Afterwards he appeared publicly as a balloon exhibitor. On 3 October 1785 he started his first air journey in Germany in Frankfurt am Main on the occasion of the Autumn Fair and travelled from the Bornheimer Heide near Bornheim to Weilburg an der Lahn. Blanchard claimed the invention of the parachute for himself comparable with the French André-Jacques Garnerin [6] and let his dog float down to earth with the parachute for the first time during this ascent, which also safely reached its destination. The now famous inventor started touring through Europe in order to demonstrate his balloons and achievements. 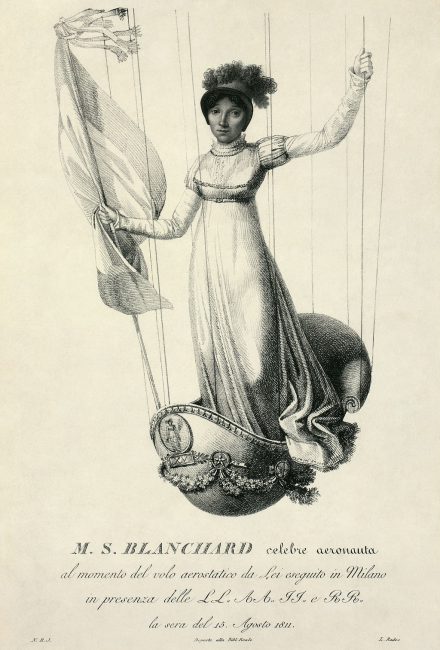 Sophie Blanchard makes her ascent in Milan on 15 August 1811 to mark the 42nd birthday of Napoleon.

In 1793, Blanchard conducted the first balloon flight in the Americas. He launched his balloon from the prison yard of Walnut Street Jail in Philadelphia, Pennsylvania and landed in Deptford, New Jersey. One of the flight’s witnesses that day was President George Washington, and the future presidents John Adams, Thomas Jefferson, James Madison, and James Monroe were also present.

In 1804 he married Marie Madeleine Sophie Armant, aged twenty-six, who also became an enthusiastic balloonist. Together with her husband, Sophie Blanchard crossed the English Channel in the opposite direction from Calais to Dover. When Blanchard died of a stroke during a balloon flight on 7 March 1809, his wife was the first balloonist to continue the series of demonstrations.