You are here: Home › music › The Inglourious Death of Jean-Baptiste Lully, Composer 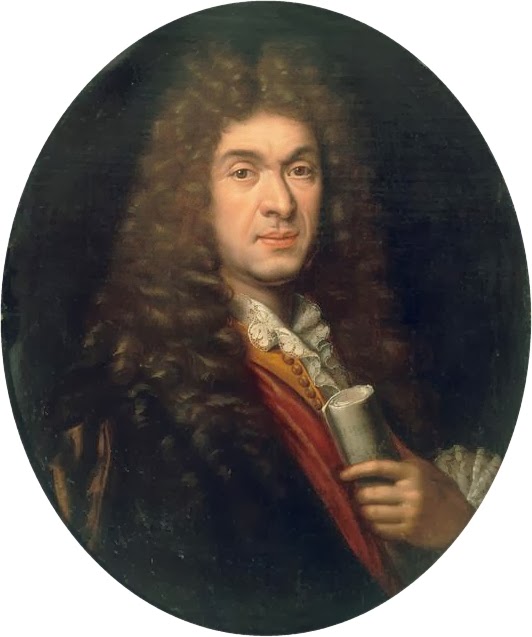 On January 8, 1687, French ballet dancer and composer Jean-Baptiste Lully struck his foot with his long conducting staff during a performance of his Te Deum. Because he refused to treat the wound, it got infected and he died from gangrene soon after. Besides this inglourious way of death, Lully is considered the chief master of the French baroque style, who stripped of all Italian influences from French music of the period and reconfigured the orchestra.

Originally, Jean-Baptiste Lully was of Italian origin. He was born in Florence on November 28, 1632, to a family of millers. His general education and his musical training during his youth in Florence remain uncertain. According to his own account, a Franciscan friar gave him his first music lessons and taught him guitar. He also learned to play the violin. In 1646, dressed as Harlequin during Mardi Gras and amusing bystanders with his violin, the boy attracted the attention of Roger de Lorraine, chevalier de Guise, who was returning to France and was looking for someone to converse in Italian with his niece, Mademoiselle de Montpensier. Guise took the boy to Paris, where the fourteen year-old entered Mademoiselle’s service as her “chamber boy”. Lully’s talents as a guitarist, violinist, and dancer quickly won him the nicknames “Baptiste“, and “le grand baladin” (great street-artist).

In 1653 Lully was able to attract the attention of young Louis XIV, dancing with him in the Ballet royal de la nuit. In this ballet Lully performed several roles, as e.g. a shepard, a soldier, a beggar, and a grace. The king was dancing for the first time in the role of the rising sun and he enjoyed Lully’s acting and dancing so much that he promoted him to Compositeur de la musique instrumentale (royal composer for instrumental music). Lully was dancing for several occasions together with the king. Meanwhile he also was able to achieve first success with his compositions.

His breakthrough as a composer was ‘Amour malade‘, which premiered on January 1597, where he also took over a dancing part as ‘Scaramouche‘. Already in 1653, Louis XIV had made Lully director of his personal violin orchestra, known as the Petits Violons (“Little Violins”), which was proving to be open to Lully’s innovations, as contrasted with the Twenty-Four Violins or Grands Violons (“Great Violins”), who only slowly were abandoning the polyphony and divisions of past decades. Lully’s vocal and instrumental music for court ballets gradually made him indispensable. When Louis XIV took over the reins of government in 1661, he named Lully superintendent of the royal music and music master of the royal family.

Also in 1661, Lully began his collaboration with playwright Molière [1]. More theatrical collaborations followed, some of them conceived for fetes at the royal court, and others taking the form of incidental music for plays performed at command performances at court and also in Molière’s Parisian theater. After Lully’s relationship with Molière ended in 1672, he became the director of the Académie Royale de Musique, that is, the royal opera, which performed in the Palais-Royal. Between 1673 and 1687 Lully produced a new opera almost every year and fiercely protected his monopoly over that new genre. In 1682 the court finally moved to Versailles. Lully’s opera Persée was given on this occasion. Ninety years later, on 17 May 1770, the Versailles Opera House was inaugurated with this work for the wedding of the future Louis XVI to Marie Antoinette. This speaks for the importance which Lully’s works were still accorded in the 18th century. Lully’s most successful opera Amadis was performed every year as long as the king lived. Furthermore, Lully turned away from mythology and sang the praises of French knightly epics, which are about defending the faith as the highest ideal.

After Queen Marie-Thérèse’s death in 1683, the king’s enthusiasm for opera dissipated and Lully’s success began to decline, because of the influence of the king’s new mistress Madame Maintenon. Moreover, the king was offended by Lully’s dissolute life and homosexual encounters, which could not be accepted by Madame Maintenon, who was brought up in a strictly religious tradition. In 1685 Lully’s opera Roland premiered. Around this time there was a scandal when it became publicly known that Lully had an affair with a bellboy named Brunet; in addition, he participated in the orgies of the Dukes of Orléans and Vendôme. The king quoted Lully and told him that he was no longer willing to tolerate his behavior. Although Lully had meanwhile been appointed Secrétaire du Roi, had been (at least on paper) advisor to the king and had been ennobled, the king now treated his former confidante with cold.

In 1687, King Louis XIV got seriously ill. First he was only complaining about toothache. When the doctors tried to pull out the tooth, they did this so clumsy that they broke off a piece of the king’s upper jaw. The severe blooding wound was sealed with a red hot iron rod. Although everybody assumed the king’s approaching death, he recovered. To celebrate the king’s fortunate recovery, Lully rearranged his 1678 composed Te Deum and planned to perform it with all the 300 musicians of the royal court. But, when they played the pice on January 8, 1687 in the church ‘Église des Pères Feuillants’ a severe accident happened. As usual in this time, Lully was beating the rhythm with a long and ornamented wooden stick on the floor, when he hit the top front of his foot. The small wound inflamed and soon gangrene began to spread, because Lully refused to amputate his toe.

Jean-Baptiste Lully died of gangreme on March 22, 1687. He was buried in Notre-Dame-des-Victoires with great sympathy. In contemporary literature or on illustrations, however, there is no evidence of conducting with long sticks – usually a rolled sheet of paper was used in one or both hands. Perhaps Lully wanted to call the attention of the musicians present with a walking stick.

With his new orchestral discipline, Lully not only had a decisive influence on the French style, but also on the musical practice of the late 17th century. Lully’s greatest merit lies in the justification of the French National Opera. Louis XIV, as in all areas of art, demanded his own French form of expression in music as well. In Lully and his librettist Philippe Quinault he found masters who put his ideas into practice. With the opera form of Tragédie lyrique created by them, Lully and Quinault succeeded in creating their own form of opera based formally on the great classical tragedies of important writers such as Corneille or Racine. On this basis, Lully developed his operas as a total work of art, including large choral scenes and ballet interludes of the dance that is traditionally important for France. This enabled him to satisfy the expectations of the King and the French public.

Anastasia Zolotukhina, The Doctrine of Affects – methods of working with emotions of the past in dance of the Baroque era, [8]