You are here: Home › engineering › Ulman Stromer and the First Paper Mill North of the Alpes 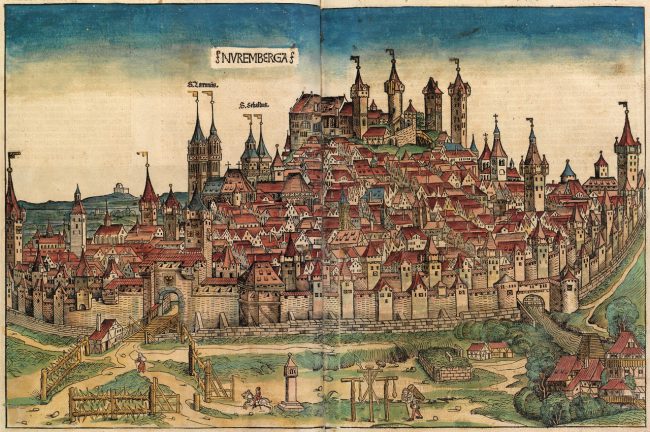 The – rebuilt – paper mill of Stromer in a Nuremberg city view from 1493. Like all paper mills it was outside the city walls (the building complex in the lower right corner) due to the stench and noise.

On January 6, 1329, German long-distance trader, factory owner and councillor of Nuremberg Ulman Stromer was born. Stromer established the very first permanent paper mill north of the Alpes, at the Pegnitz river not far from the city of Nuremberg.

“In the name of Christ, amen. Anno Domini 1390, I, Ulman Stromer, started at making paper on St. John’s day at the Solstice, and began to set up a wheel in the Gleissmühle, and Clos Obsser was the first who came to work.”
— Ulman Stromer, “The First German Paper-maker”, Popular Science Monthly Vol. 42, [9]

The story of paper as a writing material dates back to ancient times. Papyrus as its predecessor was introduced in Egypt most probably already in the 3rd millenium BCE. Papyrus differs from paper mainly in the technique of production: plant fibres are joined together by tapping and formed into a sheet. In the production of real paper, the fibres are soaked in water and separated from each other. The fibres then have to be placed as a thin layer on a sieve, dewatered and dried. The intertwined, felted fibres form the paper. Another writing material also already introduced in antiquity is parchment. In the advanced civilizations of the Ancient Orient and the Mediterranean, leather has been used as a writing material since time immemorial. Like leather, parchment is also made from animal skins. Due to the advantages of parchment, other writing materials were displaced in medieval Europe. The animal skins were pickled with potash or lime, thoroughly cleaned and stretched dry, followed by scraping and surface treatment.

The Invention of Paper

Although there are finds from China dating back to about 140 BCE, the invention of  paper is attributed to Ts’ai Lun, who around 105 A.D. (date of the first mention of the Chinese paper manufacturing method) was an official of the Chinese Imperial Court’s Instrument and Weapon Manufacturing Authority, describing for the first time the paper manufacturing process known today. At his time, there was a paper-like writing material made from silk waste (Chi). The early papermakers mixed it mainly with hemp, old rags and fishing nets and supplemented the material with the bark or bast of the mulberry tree. The Chinese invention consisted mainly of the novel preparation: the cleaned fibres and fibre residues were crushed, boiled and watered. Then individual layers were skimmed off with a sieve, dried, pressed and smoothed. While scooping, a “beautiful side” was created on the paper, which lay on the side facing away from the sieve, and a “sieve side”, which lay on the sieve. The resulting pulp of plant fibres deposited itself as a fleece and formed a relatively homogeneous sheet of paper.

The Paper’s Way to Europe

When exactly the first paper was produced in the Arab world is controversial. For example, 750 or 751 is mentioned as the date when Chinese people who were probably captured in a border dispute are said to have brought the technique of paper production to Samarkand. Paper production began in Baghdad around 795, and the first paper codex appeared there in 870. The cultural contact between the Christian Occident and the Arab Orient as well as Islamic Spain brought the writing material to Europe from the 11th century onwards. An important part of the raw materials for the early European paper production consisted of hemp fibres, flax fibres (linen) and nettle cloth, the paper mills bought the necessary rags from the rag collectors working for them. In Xàtiva near Valencia, according to a travel report by Al-Idrisi, there was already a flourishing paper industry in the middle of the 12th century, which also exported high-quality products to neighbouring countries. Even after the expulsion of the Arabs from Spain, the area around Valencia remained important for the paper industry because much flax (linen) was cultivated there, which is an excellent raw material for paper production.

The real machinery production of paper however, started in Europe’s medieval era. European papermakers succeeded in a short time in optimizing the work process by introducing numerous innovations unknown to the Chinese and Arabs. It was found, that using water driven paper mills would optimize the production process and the very first known paper mills were built around 1282. Throughout the years of development, the paper’s quality was dramatically increased and supported the success of Johannes Gutenberg‘s invention of mechanical movable type printing later on [4,5].

Ulman Stromer and the Gleismühle

Ulman Stromer also was an important person in the development of paper and books in Europe. Stromer was born the twelfth of 18 surviving children of the Nuremberg merchant Heinrich Stromer and his second wife Margarete Geusmid. He was trained as a merchant in the family business in Barcelona, Genoa, Milan and Krakow and went on business trips to Krakow and Lemberg at an early age. These business trips also included Lombardy, where he came into contact with paper production. In 1368 he acquired a large property in Nuremberg at the main market square directly north of the Frauenkirche and converted it into a representative residence and merchant’s yard. In 1370, together with his brothers Peter and Andreas, he took over the management of the family’s wholesale business, which stretched from Barcelona to Riga and Azov.

In 1390 Stromer converted the Gleismühle, a traditional water mill on the Pegnitz, into the first paper mill north of the Alps, the “Hadermühle” (Hadern = rags). Thus paper produced in comparatively cheap mass production began to replace the expensive parchment made from animal skins north of the Alps. The oldest illustration of the paper mill was recorded in the Nuremberg Chronicle [6]. Gleismühle consisted of two hydro-powered plant units. The smaller mill had two water wheels, the larger had three. A total of 18 rams were driven. 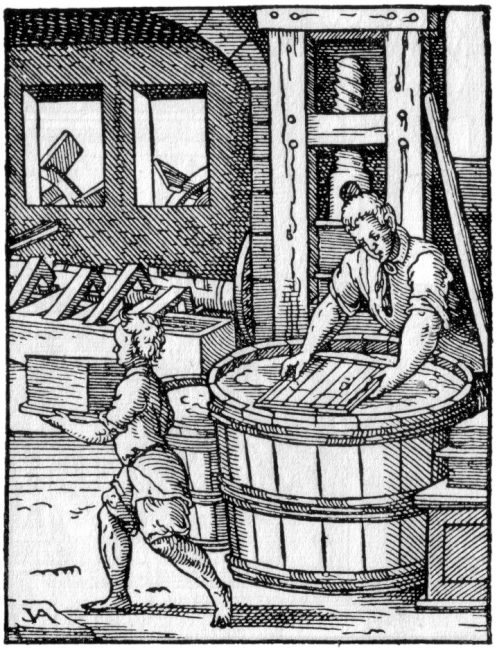 The Papyrer from Jost Amman’s “Ständebuch“, 1568

Stromer’s workers had to swear an oath not to tell the secrets of paper production and Stromer managed the paper mill himself until 1394. The operation of water-driven paper mills mechanized the comminution process, which until then had only been practiced by hand or with animals in the pan grinder. Such water mills, iron-reinforced rag stamping mills, are first documented from 1282 onwards. The tearing of rags with a scythe blade replaced the cumbersome practice of tearing by hand or cutting with knives or scissors. Paper presses, constructed in the style of antique wine presses, dried the paper by screw pressing.

The first paper mills east of the Elbe River were established in the middle of the 17th century. Francois Feureton was another important figure in the development of paper, as he established several mills in the following years. Until the mid 19th century, the needed material was made of used textiles, which turned old worn out rags into very rare and costly goods for the traders. Due to this development, Jacob Christian Schäffer began experimenting with paper production out of wood and plants instead of used clothes in the 18th century, but despite his well documented efforts the quality was still too bad to be sold. Friedrich Gottlob Keller managed to produce pulp from wood and improved his findings in 1845 until he was able to sell his product. After Keller’s death, his procedure was improved and used industrially.