You are here: Home › literature › Dreams, Travelling, and Humoresques – The Literary Life of Jean Paul 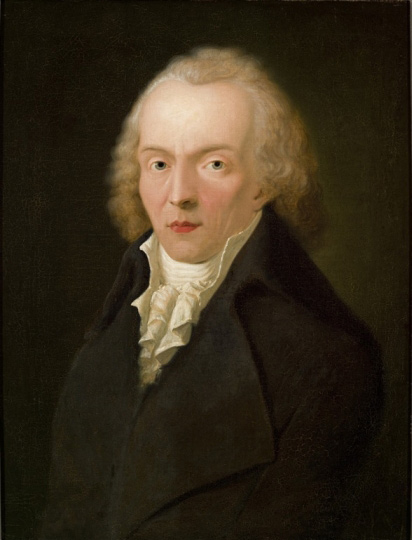 On March 21, 1762, German Romantic author Johann Paul Friedrich Richter was born, better known as Jean Paul. Jean Paul is best known for his humorous novels and stories. In terms of literary history, his work stands between the epochs of Classicism and Romanticism.

“Memory is the only paradise out of which we cannot be driven away.”
— Jean Paul’s Geist; oder Chrestomathie, Vierter Theil [4th part], Weimar/Leipzig, 1816

Johann Paul Friedrich Richter, who later called himself Jean Paul, was born in Wunsiedel in the Fichtelgebirge mountains of Franconia. He was the son of the teacher and organist Johann Christian Christoph Richter and his wife, the daughter of Sophia Rosina, née Kuhn, a cloth maker. In 1765 his father became pastor in Joditz and later in Schwarzenbach an der Saale. The atmosphere of the Protestant country parsonage shaped Jean Paul’s childhood. Away from the political and literary centres of his time, Jean Paul educated himself autodidactically and, at the age of fifteen, possessed extensive book knowledge, which he compiled in excerpts. In 1779 Jean Paul moved to the Gymnasium in Hof, where he met Johann Bernhard Hermann, who became a close friend and model for many of his novel characters, such as the Leibgeber in Siebenkäs.

In May 1781 Jean Paul enrolled at the University of Leipzig, but he studied theology only very listlessly. Instead, he began to see himself as a writer: After his first literary experiments, he mainly wrote satires in the style of Jonathan Swift [1] and Christian Ludwig Liscow, which were printed in collected form in 1783 as Grönländische Prozesse (Greenlandic Processes). After this first publication, however, there were no further successes. In 1784 Jean Paul had to flee from his creditors and returned to Hof in his mother’s house as a “failed existence”. It was not until Jean Paul found a living as a private teacher for the Oerthel family in Töpen in 1787 that his plight gradually eased.

The series of his literary successes began in 1793 with the novel Die unsichtbare Loge (The Invisible Lodge). Jean Paul had sent the manuscript to the writer Karl Philipp Moritz, and Moritz was enthusiastic: “Oh no, that’s still about Goethe, that’s something completely new,” he is said to have said, and through his mediation the book quickly found a publishing house in Berlin. In Die unsichtbare Loge Jean Paul, who had previously written his works under the pseudonym J. P. F. Hasus, used the name Jean Paul for the first time out of admiration for Jean-Jacques Rousseau.[2] However the novel remained a fragment, for Jean Paul dedicated himself to a new novel, Hesperus oder 45 Hundposttage, which appeared in 1795. The book, which became the greatest literary success since Goethe’s Die Leiden des jungen Werthers, suddenly made Jean Paul famous.[3] Johann Gottfried von Herder, Christoph Martin Wieland and Johann Wilhelm Ludwig Gleim were enthusiastic about Hesperus, but Johann Wolfgang von Goethe and Friedrich Schiller did not like the novel.

At the invitation of his admirer Charlotte von Kalb, Jean Paul visited Weimar in 1796. He was respectfully received in the literary centre of his time, but his relationship to classics such as Goethe and Schiller remained rather cool and distant. Two years later Jean Paul moved to Weimar; in the meantime he had a considerable number of literary works to show for himself: Siebenkäs (1796/97), Das Leben des Quintus Fixlein (1796), Der Jubelsenior (1797), Das Kampaner Tal (1797). Especially in Weimar, the erotic entanglements that accompanied Jean Paul throughout his life accumulated: He got engaged to Karoline von Feuchtersleben, which brought with it some difficulties because of the difference in class. He also had to constantly devise new strategies to avoid marriage with Charlotte von Kalb. But even the shy Jean Paul could not escape his fate: In the spring of 1800, on a trip to Berlin, he met Karoline Mayer, whom he married a year later. Later in 1800, Jean Paul moved to Berlin, where he made friends with the brothers August Wilhelm Schlegel [4] and Friedrich Schlegel as well as with Johann Ludwig Tieck, Friedrich Daniel Ernst Schleiermacher and Johann Gottlieb Fichte.[5]

But from the peak of his success things gradually went downhill: Jean Paul’s next novels Titan (1800-1803) and Flegeljahre (1804/1805) no longer generated the earlier enthusiasm of his readers, although they are now regarded as his most important works. In 1804 Jean Paul moved with his wife and two children to Bayreuth, where he led a secluded life, interrupted only by a few journeys, for example to Bamberg, where he visited E. T. A. Hoffmann,[6] and to Heidelberg, where he was awarded an honorary doctorate in 1817 after an extensive punching session at the suggestion of Hegel. His political statements were particularly well received by patriotic students. Jean Paul became a leading figure of the German fraternities. During visits to Heidelberg (1817) and Stuttgart (1819) he was even elevated to the status of “favourite poet of the Germans”.

“The past and future are veiled; but the past wears the widow’s veil; the future, the virgin’s.”
– Jean Paul, as quoted in [10]

Jean Paul’s works from these years, such as Levana oder Erziehlehre (1807) or Dr. Katzenberger’s Badereise (1809), no longer received the attention that Hesperus had received. In 1813 Jean Paul began his last great novel, Der Komet (The Comet), but the death of his son Max in 1821 was a stroke of fate that the author could not overcome: Der Komet was abandoned and remained a fragment. The last years of his life were marked by illness: in 1823 Jean Paul fell ill with cataracts and gradually went blind. In 1825, he became addicted to breast fluid and died of it on 14 November. He is buried in the town cemetery in Bayreuth. In 1820 the Bavarian Academy of Sciences had appointed him as its foreign member.

Jean Paul occupies a special position in German literature and has always divided the reading public. Some of them were highly esteemed, others were shaken and disinterested. August Wilhelm Schlegel called his novels “self-talks”, in which he let the reader participate – in this respect an exaggeration of what Laurence Sterne had begun in the Tristram Shandy. Jean Paul constantly played with a multitude of witty and bizarre ideas; his works are characterized by wild metaphorics as well as digressive, sometimes labyrinthine actions. In them Jean Paul mixed reflections with poetic and philosophical commentaries; in addition to witty irony there are suddenly bitter satire and mild humour, beside sober realism there are transfiguring, often ironically broken idylls, also social criticism and political statements are included.

Jonathan Bates, The Origins of Romanticism, [12]