You are here: Home › computer science › Rudy Rucker – Infinity and the Mind 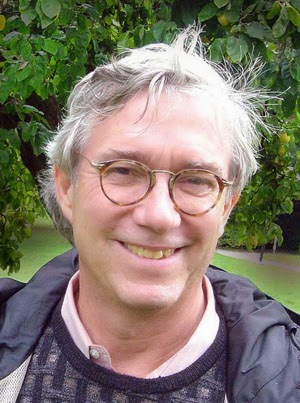 On March 22, 1946, American mathematician, computer scientist, science fiction author, and philosopher Rudolph von Bitter Rucker, better known as Rudy Rucker, was born. He is also one of the founders of the cyberpunk literary movement.

“The space of our universe is the hypersurface of a vast expanding hypersphere.”
– Rudy Rucker, The Sex Sphere (1983)

Rucker was born and raised in Louisville, Kentucky, where his father Embry Cobb Rucker, Sr., a descended from Flemish Huguenots, ran a small furniture-manufacturing company. Later in life, Embry Cobb Rucker, Sr. became an Episcopal minister and worked as parish priest for the rest of his life. His mother, Marianne von Bitter originally was from Berlin and came to study at the Pennsylvania Academy of Fine Arts in Philadelphia in 1937. She was an enthusiastic gardener, amateur artist and potter. Moreover, she also was a descendent of famous German philosopher Georg Wilhelm Friedrich Hegel.[5] Rucker attended St. Xavier High School before earning a B.A. in mathematics from Swarthmore College in 1967 and M.S. (1969) and PhD (1973) degrees in mathematics from Rutgers University with a specialization on mathematical logic.

From Higher Geometry to the Fourth Dimension

In 1972, Rucker started teaching in the Math. Dept. at the State University College at Geneseo, New York, with a “Higher Geometry” course, which turned into a series of lectures on the fourth dimension. Eventually he wrote the lectures up as Geometry, Relativity and The Fourth Dimension, published by Dover Publications, which should become the foundation of his writing career. Thanks to a grant from the German Alexander von Humboldt Foundation, Rucker taught math at the Ruprecht Karl University of Heidelberg from 1978 to 1980. He then taught at Randolph-Macon Women’s College in Lynchburg, Virginia from 1980 to 1982, before trying his hand as a full-time author. Inspired by an interview with British scientist Stephen Wolfram, Rucker became a computer science professor at San José State University in 1986, from which he retired in 2004.

“Computationsare everywhere, once you begin to look at things in a certain way.” (Rudy Rucker)

A mathematician with philosophical interests, Rucker published Infinity and the Mind in 1982. The book contains accessible popular expositions on the mathematical theory of infinity, and a number of related topics. These include Gödel‘s incompleteness theorems [6] and their relationship to concepts of artificial intelligence and the human mind, as well as the conceivability of some unconventional cosmological models. The material is approached from a variety of viewpoints, some more conventionally mathematical and others being nearly mystical.

As his “own alternative to cyberpunk,” Rucker developed a writing style he terms Transrealism. The essence of transrealism, as outlined in his 1983 essay “The Transrealist Manifesto,” is to write about one’s real life in fantastic terms. The Secret of Life, White Light, and The Sex Sphere are examples of his transreal novels. The first recasts a traditional coming of age memoir as a UFO novel, the second is about Rucker’s time as a mystical mathematician at SUNY Geneseo, while the third turns his two years in Germany into a tale of higher dimensions and nuclear terrorism.

Rucker is presently working on a 1950s SF novel called The Turing Chronicles, featuring a love affair between computer pioneer Alan Turing [4] and Beat author William Burroughs. Rucker often uses his novels to explore scientific or mathematical ideas; White Light examines the concept of infinity, while the Ware Tetralogy is in part an explanation of the use of natural selection to develop software. His non-fiction book, The Lifebox, the Seashell, and the Soul: What Gnarly Computation Taught Me About Ultimate Reality, the Meaning Of Life, and How To Be Happy summarizes the various philosophies he’s believed over the years and ends with the tentative conclusion that we might profitably view the world as made of computations, with the final remark, “perhaps this universe is perfect.”