You are here: Home › biology › Jane Goodall and the True Nature of Chimpanzees 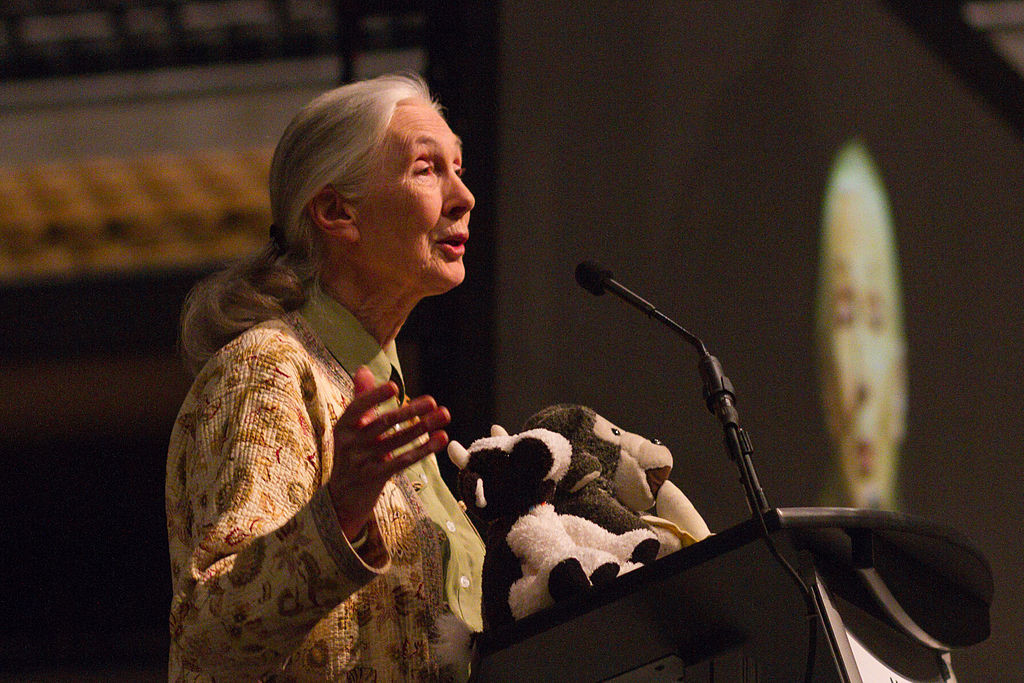 On April 3,1934, English primatologist, ethologist, anthropologist, and UN Messenger of Peace Dame Jane Morris Goodall, was born. Considered to be the world’s foremost expert on chimpanzees, Goodall is best known for her 55-year study of social and family interactions of wild chimpanzees in Gombe Stream National Park, Tanzania.

“The more we learn of the true nature of non-human animals, especially those with complex brains and corresponding complex social behavior, the more ethical concerns are raised regarding their use in the service of man — whether this be in entertainment, as “pets,” for food, in research laboratories, or any of the other uses to which we subject them.”
– Jane Goodall (2000), [5]

Jane Goodall was born Valerie Jane Morris-Goodall in London in 1934 and it is said that she received a toy chimpanzee as a child, which initiated her great love for animals. Her father Mortimer Morris-Goodall was an automobile racer and motorsport official. Apparently, she decided that she wanted to visit Africa after reading the story of Dr. Dolittle, who – besides talking with animals – also travalled to Africa. After finishing High School, Jane became a secretary at Oxford University since her family could not afford a university education for her.

Then, in 1956, she was invited to visit her friend’s family in Kenya and she quit her job in London and started a waitress job in Bournemouth in order to save money for the trip. At the age of 23 years, Jane Goodall arrived in Mombasa. The trip highly influenced her, and most important is probably a meeting with Dr. Louis Leakey, the famous anthropologist and paleontologist.[2] Louis Leakey then hired Jane as his assistant and secretary at the Coryndon Museum. Jane Goodall was soon in the Olduvai Gorge digging up fossils with Leakey and his anthropologist wife Mary Leakey.[3]

Back then, not too much was known about wild chimpanzees and Louis Leakey was looking for someone to go to Tanzania and do some research on the topic. Of course, Jane agreed to go to Tanzania and arrived in the summer of 1960 on the shores of Lake Tanganyika. Back then, it was unusual that a woman was traveling by herself, so the British government requested that Jane Goodall took a companion. Her mother shared her adventure for a few months. Studying the Gombe chimps was not easy at first. They fled as soon as they saw the scientist, but she managed to first watch them from a distance and gradually move closer.

Now we must redefine…

Back in the days, it was still widely assumed that humans were the only species able to build tools. In November of 1960, Jane watched two chimps making tools for fishing termites out of a termite mound, a revolutionary observation. This was one of Jane Goodall’s most important discoveries, Louis Leakey responded after he had heard of it: “Now we must redefine tool, redefine Man, or accept chimpanzees as humans“. Also, she managed to observe that chimpanzees were even hunting and eating small animals. This was also new. Most scientists at the time thought of chimps as vegetarians.

The respect for Jane Goodall and her work increased after these famous discoveries and National Geographic even decided to document her life in Gombe. Magazine articles and TV specials followed, however, Jane Goodall knew that she had to have a doctorate degree in order to be taken seriously by experts as well. She enrolled at Cambridge University as a Ph.D. candidate, but was often criticized for her methods. For instance, it was criticized that she gave the chimpanzees names instead of numbers.

In 1965, Jane and her husband Hugo started the Gombe Stream Research Centre. It was meant for students to visit the area and help with the observations on chimpanzees. Jane Goodall earned her Ph.D in ethology in 1966 and the research in Gombe went on. After some time studying the chimps, the scientists also noticed their “dark sides” next to showing cooperation, affection, and happiness. For example, they observed a large conflict between two groups in which one group attacked and killed the other until it was gone. The researchers refer to this period as the ‘four year war’. However, they also observed that chimpanzees were able to ‘adopt’ chimpanzee babies. The 3-year old chimp Mel was orphaned in 1987 and was then ‘adopted’ and protected by the older male chimp Spindle.

“The greatest danger to our future is apathy. We cannot expect those living in poverty and ignorance to worry about saving the world. For those of us able to read this magazine, it is different. We can do something to preserve our planet.”
– Jane Goodall, “The Power of One”, TIME Magazine (26 August 2002)

However, Jane Goodall’s work on chimpanzees was not only to observe and study them, but also to protect them. It is believed that during a conference in Chicago in the 1980s, she realized how rapidly the forest was cut down in Africa and that she had to do something to protect the life of her beloved chimpanzees and other animals. However, she also realized that in most cases, the people there only tried to survive themselves and she started a program traveling around the world and talking to audiences about their power to help other people and how to support the environment at the same time. Already in 1977, Jane Goodall founded her institute which had programs to benefit people who are living in poverty in Africa, and to spread the word about the importance of conserving the forests and animal populations.

What separates us from chimpanzees? | Jane Goodall, [6]