You are here: Home › literature › Edward Lear and his Book of Nonsense 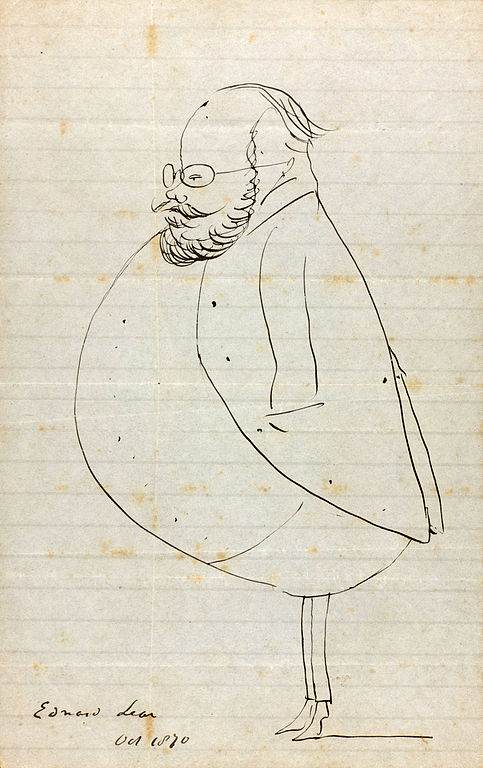 On May 12, 1812, English artist, illustrator, musician, author and poet Edward Lear was born. He is known now mostly for his literary nonsense in poetry and prose and especially his limericks, a form he popularised. As an author, he is known principally for his popular nonsense collections of poems, songs, short stories, botanical drawings, recipes, and alphabets.

Edward Lear was born as the penultimate of twenty-one children of Ann Clark Skerrett and Jeremiah Lear, a middle-class family in the London suburb of Holloway. His father, a stockbroker of Danish origins, was sent to debtor’s prison when Lear was thirteen and the young Lear was forced to earn a living, being raised by his eldest sister, 21 years his senior, who continued to act as a mother for him until her death, when he was almost 50 years of age. Lear suffered from lifelong bad health including frequent epileptic seizures, bronchitis, asthma, and during later life, partial blindness. He also suffered from periods of severe melancholia and depression. Lear received little, if any, formal education. Ann tutored him at home and encouraged a talent for drawing and painting that he had early exhibited.[2]

From age 15, Lear earned his living by drawing with anatomical drawings and then to illustrations for natural history books. Soon, he developed into a serious “ornithological draughtsman” employed by the Zoological Society. Lear’s first publication, published when he was 19 years old, was Illustrations of the Family of Psittacidae, or Parrots in 1830. His paintings were well received and he was compared favourably with the naturalist John James Audubon.[5] He subsequently worked for the British Museum, made drawings of birds for the ornithologist John Gould, and, during 1832–37, made illustrations of the earl of Derby’s private menagerie at Knowsley, Lancashire.

Lear travelled for three years in Italy from 1837 and published two volumes of illustrations, Illustrated Excursions in Italy, the first of many such books. Among other trips, he visited Greece and Egypt in 1848-49, and toured the length of India and Ceylon in 1873-75. While travelling he produced large quantities of colored wash drawings in a distinctive style, which he worked up back in his studio into oils and watercolors, as well as prints for his books. He had a lifelong ambition to illustrate the poems of Alfred Lord Tennyson.[6] He also composed music for many Romantic and Victorian poems, but was known mostly for his many musical settings of Tennyson’s poetry.

The First Book of Nonsense

In the 4 years Lear spent at the Earl of Derby’s private menagerie at Knowsley, he became a favorite with the grandchildren. For them he created his first Book of Nonsense under the pseudonym Derry down Derry, a collection of 50 limericks, a verse form he had first encountered in the joke book Anecdotes and Adventures of Fifteen Gentlemen (circa 1822), illustrated with delightful nonsense drawings.[3] Lear’s nonsense books were quite popular during his lifetime, but a rumor developed that “Edward Lear” was merely a pseudonym, and the books’ true author was the man to whom Lear had dedicated the works, his patron the Earl of Derby. Promoters of this rumor offered as evidence the facts that both men were named Edward, and that “Lear” is an anagram of “Earl.” 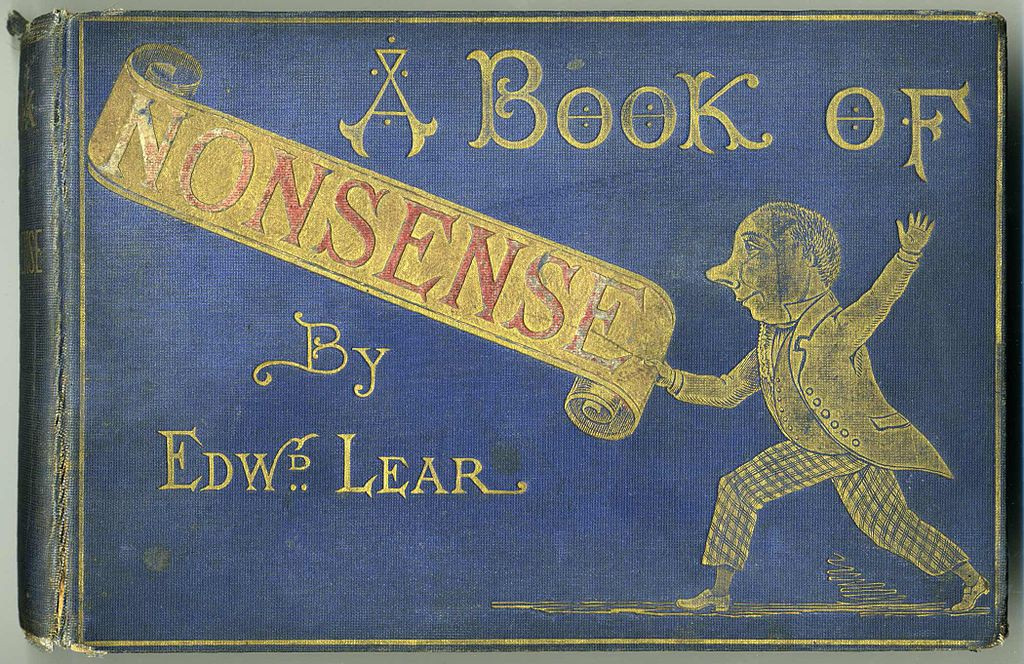 Cover for A Book of Nonsense by Edward Lear (1875 edition)

Lear’s nonsense works are distinguished by a facility of verbal invention and a poet’s delight in the sounds of words, both real and imaginary. A stuffed rhinoceros becomes a “diaphanous doorscraper.” A “blue Boss-Woss” plunges into “a perpendicular, spicular, orbicular, quadrangular, circular depth of soft mud.” One of his most famous neologisms, the phrase “runcible spoon,” occurs in the closing lines of The Owl and the Pussycat (1871), and is now found in many English dictionaries.

The Dong with the Luminous Nose

Like his younger peer Lewis Carroll [7] Lear wrote many deeply fantastical poems about imaginary creatures, such as “The Dong with the Luminous Nose.” His books of humorous verse also include Nonsense Songs (1871) and Laughable Lyrics (1877).[4] Although the subject and form of his works varies greatly, all of Lear’s poems can be characterized by his irreverent view of the world. Lear poked fun at everything and did not stop to include also himself. Many critics view Lear’s devotion to the ridiculous as a method for dealing with or undermining the all-pervasive orderliness and industriousness of Victorian society.[4]

In Lear’s limericks the first and last lines usually end with the same word rather than rhyming. For the most part they are truly nonsensical and devoid of any punch line or point.

There was an Old Man with a beard,
Who said ‘It is just as I feared! –
Two Owls and a Hen,
Four Larks and a Wren,
Have all built their nests in my beard!’