You are here: Home › astronomy › James Edward Keeler and the Rings of Saturn 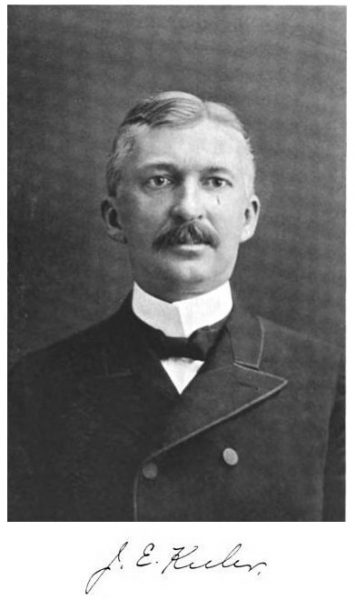 On September 10, 1857, American astronomer James Edward Keeler was born. Keeler is best known for being the astronomer who confirmed James Clerk Maxwell‘s theory that the rings of Saturn were not solid (requiring uniform rotation), but composed of meteoric particles.[3]

James Edward Keeler was born in La Salle, Illinois, to William F. Keeler, who served as a paymaster in the U.S. Navy at the time of the American Civil War, and his wife Anna, the daughter of Henry Dutton, onetime governor of Connecticut.[2] Keeler attended public schools in La Salle until 1869, when his father moved with his family to Mayport, Florida. Already at the age of eight, James hat developed an interest in astronomy, and ten years later he purchased lenses for a two-inch telescope with money, which he had earned by his own efforts and mounted them himself. Thus, in late 1875, he saw the ring of Saturn for the first time. This was the beginning of his “Mayport Astronomical Observatory”; other equipment included a quadrant, chronometer, and meridian circle — all homemade. In his notebook “Record of Observations made at the Mayport Observatory” he put beautifully colored sketches of Jupiter, Saturn, Venus, Mars, the Orion Nebula, and of the Moon.[1]

Charles H. Rockwell, of Tarrytown, New York, learned of Keeler’s interest in astronomy and made it possible for him to enroll as a freshman at the newly opened Johns Hopkins University in Baltimore, Maryland in 1877. Keeler earned part of his expenses there as assistant to Charles S. Hastings, professor of physics, and with him took part in the U.S. Naval Observatory expedition to Central City, Colorado, to observe the solar eclipse of 29 July 1878. Upon receiving his B.A. degree in June 1881, Keeler went to Pittsburgh, Pennsylvania, as assistant to Samuel P. Langley, who was then director of the Allegheny Observatory.[2,4]

In 1883 Keeler went to Europe, to study at Heidelberg under G. H. Quincke and at the University of Berlin under H. L. F. von Helmholtz.[5] He then returned to Allegheny, to remain until 1886, when he became the first professional astronomer to reside on Mount Hamilton, where the Lick Observatory was under construction. When the University of California took formal possession of Lick in 1888, Keeler remained, with the title of astronomer.

The Gap in Saturn’s Rings

In 1891, he was appointed director of the University of Pittsburgh’s Allegheny Observatory. During this period of his life Keeler designed a spectrograph — differing from a spectroscope in that spectral lines are recorded photographically rather than being located by eye.[2] Keeler was the first to observe the gap in Saturn’s rings now known as the Encke Gap, using the 36-inch refractor at Lick Observatory on 7 January 1888. After this feature had been named for Johann Encke, who had observed a much broader variation in the brightness of the A-Ring, Keeler’s contributions were brought to light. The second major gap in the A Ring, discovered by the spaceprobe Voyager, was named the Keeler Gap in his honor.

In 1895, his spectroscopic study of the rings of Saturn revealed that different parts of the rings reflect light with different Doppler shifts, due to their different rates of orbit around Saturn. This was the first observational confirmation of the theory of James Clerk Maxwell that the rings are made up of countless small objects, each orbiting Saturn at its own rate. These observations were made with a spectrograph attached to the 13-inch Fitz-Clark refracting telescope at Allegheny Observatory.

His observations with the Lick Crossley telescope helped establish the importance of large optical reflecting telescopes, and expanded astronomers’ understanding of nebulae. After his untimely death, his colleagues at Lick Observatory arranged for the publication of his photographs of nebulae and clusters in a special volume of the Lick Observatory publications. Keeler also discovered two minor planets, the Koronis asteroid 452 Hamiltonia in 1899, and the Mars-crosser asteroid (20958) A900 MA in 1900.

He returned to Lick Observatory to succeed Edward S. Holden as director in 1898, but died not long after in 1900. Keeler was granted an honorary Sc.D. by the University of California in 1893. He was elected a fellow and foreign associate of the Royal Astronomical Society (London) in 1898, and awarded the Rumford Medal of the American Academy of Arts and Sciences that same year, for his applications of spectroscopy to astronomy. On the same basis he received the Henry Draper medal from the National Academy of Sciences in 1899 and was elected to membership in 1900.[2] Along with George Hale, Keeler founded and edited the Astrophysical Journal, which remains a major journal of astronomy today.

When James Edward Keeler died at the early age of only forty-two, Keeler was the leading astrophysicist in the United States.