You are here: Home › biology › Augustine Pyramus de Candolle and the Biological Clock 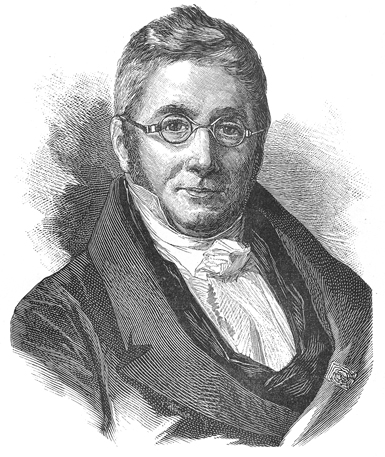 On September 9, 1841, Swiss botanist Augustin Pyramus de Candolle passed away. Candolle originated the idea of “Nature’s war”, which influenced Charles Darwin and the principle of natural selection.[3,4] Furthermore, he recognized that multiple species may develop similar characteristics that did not appear in a common evolutionary ancestor; this was later termed analogy. During his work with plants, de Candolle noticed that plant leaf movements follow a near-24-hour cycle in constant light, suggesting that an internal biological clock exists.

Augustin-Pyrame de Candolle was born on February 4, 1778 in Geneva, Switzerland, the son of Augustin de Candolle, a banker and magistrate, and Louise-Eléonore Brière. He first studied medicine in Paris and graduated in 1804. He then studied biology with Georges Cuvier [5] and Jean-Baptiste de Lamarck [6] and worked for them. Already in 1798, he had moved to Paris and started working in the herbarium of Charles Louis L’Héritier de Brutelle. Through this position, de Candolle was able to establish a good reputation. After publishing his first major works, Plantarum historia succulentarum and Astragalogia, he was noticed by Georges Cuvier as well as by Jean-Baptiste Lamarck. The latter then entrusted him with the publication of the third edition of the Flore française and in the introduction entitled Principes élémentaires de botanique, de Candolle proposed a natural method of plant classification as opposed to the artificial Linnaean method.[7]

In 1804, de Candolle published his Essai sur les propriétés médicales des plantes and was granted a doctor of medicine degree by the medical faculty of Paris. In 1808 he took over a chair in botany at the Faculty of Natural Sciences in Montpellier, where he also headed the Botanical Garden. In Montpellier he met the Mexican botanist José Mariano Mociño, who left him the records and samples from his botanical expedition with Martín Sessé y Lacasta. In 1816 Candolle returned to Geneva, where he held a chair in botany and zoology at the University of Geneva until 1834. In 1817 he founded the first botanical garden in Geneva (Jardin botanique des Bastions).

In the field of chronobiology, de Candolle built upon earlier work on plant circadian leaf movements contributed by such scientists as Jean-Jacques d’Ortous de Mairan and Henri-Louis Duhamel du Monceau. He observed in 1832 that the plant Mimosa pudica had a free-running period of leaf opening and closing of approximately 22–23 hours in constant light, significantly less than the approximate 24-hour period of the Earth’s light-dark cycles. He hypothesized that a different clock had to be responsible for the rhythm. The shortened period was not entrained — coordinated — by environmental cues, thus the clock appeared to be endogenous. In the mid-1920s, Erwin Bunning repeated Candolle’s findings and came to similar conclusions, and studies that showed the persistence of circadian rhythm in the South Pole and in a space lab further confirmed the existence of oscillations in the absence of environmental cues.

De Candolle was the first to put forward the idea of “Nature’s war“, writing of plants being “at war one with another” with the meaning of different species fighting each other for space and resources”. Charles Darwin studied de Candolle’s “natural system” of classification in 1826 when at the University of Edinburgh, and in the inception of Darwin’s theory in 1838 he considered “the warring of the species“, adding that it was even more strongly conveyed by Thomas Malthus, producing the pressures that Darwin later called natural selection. In 1839 de Candolle visited Britain and Darwin invited him to dinner, allowing the two scientists the opportunity to discuss the idea. De Candolle was also among the first to recognize the difference between the morphological and physiological characteristics of organs. He ascribed plant morphology as being related to the number of organs and their positions relative to each other rather than to their various physiological properties. Consequently, this made him the first to attempt to attribute specific reasons for structural and numerical relationships amongst organs, and thus to distinguish between major and minor aspects of plant symmetry. To account for modifications of symmetry in parts of different plants, an occurrence that could hinder the discovery of an evolutionary relationship, de Candolle introduced the concept of homology.

Although de Candolle’s main focus was botany, throughout his career he also dabbled in fields related to botany, such as phytogeography, agronomy, paleontology, medical botany, and economic botany. De Candolle’s publications include the Historia Plantarum Succulentarum (Histoire des plantes grasses, 1799 to 1803) and Théorie élémentaire de la botanique (1813), in which he presented his new classification system for plants. He is one of the most important botanists of his century and has significantly influenced the adventitious floristry, among other things.  On 18 July 1807, Candolle and his local guide Simon Faure were the first to climb the Pic de Montcalm in the Pyrenees. In 1810, he was accepted as a corresponding member of the Académie des sciences; from 1841 he was an associé étranger of the academy. In 1818, he was elected a member of the Gelehrtenakademie Leopoldina, in 1820 a foreign member of the Bavarian Academy of Sciences, and in 1827 a corresponding member of the Prussian Academy of Sciences. The Royal Society, of which he had been a foreign member since 1822,  awarded him the Royal Medal in 1833. In 1823 he was elected a fellow of the Royal Society of Edinburgh.

Augustin de Candolle died on 9 September 1841 in Geneva, after being sick for many years